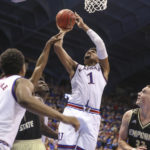 Kansas forward Dedric Lawson (1) puts up a shot over Emporia State forward Kooper Glick (32) and the Emporia State defense during the second half of an exhibition, Thursday, Oct. 25, 2018 at Allen Fieldhouse.

A couple of weeks ago, at KU’s annual media day, Kansas basketball coach Bill Self said power forward Dedric Lawson needed “to be able to play everywhere” for the new-look Jayhawks.

On Thursday night, in his first actual game in a Kansas uniform, Lawson obliged.

In guiding top-ranked Kansas to a 93-55 victory over Emporia State in the exhibition opener at Allen Fieldhouse, the Memphis transfer scored KU’s first 10 points, recorded a double-double in his first nine minutes and touched nearly every plank of hard maple on KU’s home floor in the process.

The thing was, neither he nor Self were all that impressed.

“(Coach Self) said it was the ugliest 31 he’s ever seen,” Lawson said with a grin. “And I agree with him. It was our first time playing together and it was kind of a sloppy start. But I felt like a freshman out there again and I had a lot of fun.”

From the minute he committed to Kansas after deciding to leave his hometown in April of 2017, Lawson was billed as a jack-of-all-trades offensive weapon who can score inside, outside and everywhere in between.

Emporia State coach Craig Doty on Thursday said the Hornets had no answer for how to guard him, and the first-year ESU coach hypothesized that Lawson would be a “matchup nightmare” for Big 12 foes later this season.

As good as Lawson was on the stat sheet, he was not immune to some of the issues that plagued his teammates.

His monster double-double was tainted ever so slightly by four turnovers. And he dished just one assist, a number far too low for a player who expects to average four or five assists a game this season.

“I’ve got to get other guys involved more,” he said after the victory. “I was just trying to play as hard as I could.”

For the most part, that was enough.

Lawson hit 2 of 4 from 3-point range, knocked in seven of nine free throws and scored in a variety of ways around the basket. One particular move, which could be described as a Lawson family favorite, was a right hook over his left shoulder that always seemed to leave his hand just a hair before his defender could do anything about it.

“My dad taught me that move, when I was like 10 or 11,” Lawson said. “That’s something he preached to me a lot, ‘Use your jump hook.’ It’s easier to shoot over smaller and taller guys.”

Said Self of his shiny new weapon: “Dedric can score, but he got off balance a lot and certainly he can play better than that.”

It was not just Lawson who helped Kansas race out to a 45-22 halftime lead and a 48-33 edge in the second half.

Marcus Garrett (five points, nine rebounds), Quentin Grimes (10 points) and Lagerald Vick (seven points, five assists) all flashed an aggressive nature that figures to benefit this team in the half-court and in transition.

Garrett skied for a rebound on the defensive glass and raced coast to coast for a flashy layin. Grimes stayed stuck to his man, blocked a 3-point attempt with the shot clock winding down and raced to the other end for a transition bucket of his own. And Vick, who was noticeably more vocal with teammates — telling them where to go, when they messed up and what they needed to do — knifed his way into the lane for a couple of easy baskets but always looked for others in the process.

His drive to the free-throw line and kick to the corner at the 17:24 mark of the first half, led to Lawson’s first 3-pointer — KU shot 12 of 30 from behind the arc for 40 percent — and opened the floodgates for the rout.

Nine minutes later, Kansas led 28-6 and was well on its way to holding the Hornets under 30 percent shooting (27.8) for the night.

Predictably, Self was less than overjoyed about the Jayhawks’ first live showing of the season.

To the casual observer, the 93 total points, big night for Lawson and series of highlights made for a fun night at the Fieldhouse. But a coach’s eye often races right by those numbers and seeks out the glaring issues.

On Thursday night, both coaches picked out the same issue for Kansas.

“Our bigs just turn it over at an alarming rate, and we’ve got to get it corrected,” Self said of the fact that Lawson, Udoka Azubuike, David McCormack and Mitch Lightfoot combined for 15 of the team’s 22 turnovers on Thursday. “This is the fourth time we have played with officials, and every game our bigs have had two-thirds of our turnovers. So, obviously, there’s a trend there that we need to correct.”

Azubuike, KU’s 7-foot junior who flirted with turning pro in the offseason, attempted just one shot, scored two points and turned it over six times in 17 minutes while constantly drawing a shrug and a stare from Self on the bench.

“That’s probably (as little) a factor as Dok’s been any time I can remember,” Self said.

Emporia State’s game plan of trapping the post early and often led to a lot of KU’s turnovers and also inspired Self to acknowledge that even Thursday’s bad stats could be construed as a good thing for this team because they identified areas that need improvement.

“I thought the first five to seven minutes were pretty good,” Self said. “I thought after that it wasn’t very good at all. You know, we didn’t play well.”

As expected, sophomore forward Silvio De Sousa sat on the bench in street clothes, awaiting the outcome of a pending look at his eligibility in light of new information that emerged from the recent college basketball trial in New York. Walk-on E.J. Elliott missed Thursday’s game with a fever and was not in the building.

The Jayhawks get one more tune-up — 7 p.m. Thursday vs. Washburn at Allen Fieldhouse — before opening the season for real on Nov. 6 against Michigan State at the Champions Classic in Indianapolis.