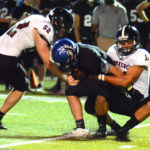 In the week leading up to the City Showdown, LHS coaches are calling FSHS players by their respective numbers during practice and film sessions. Yet the Lions, unlike most weeks, know the names of the players coaches are talking about.

After all, a majority of players have friendships with members of their crosstown foe.

“There is always talk around town about who is going to do what,” Bart said. “I have respect for all the guys over there, because they do the exact same thing we do.”

In the end, however, both teams want to come away victorious in a battle for city football supremacy.

Bart and the rest of the LHS seniors certainly want a win in their last City Showdown after being so close in 2017. The Firebirds finished off an undefeated regular season with a 24-21 victory over the Lions, as Kameron Lake drilled a 28-yard field goal to clinch the win.

“This is a game that you look forward to,” Bart said. “Senior year, Lawrence High vs. Free State. It is something you dream about when you start playing football. It is something we are all really excited and pumped up for.”

Bart has been playing football for as long as he can remember, including three seasons for the varsity team at Lawrence.

Over that span, Bart has been more physical against opposing offensive linemen. Bart, who is 6-foot-4, 212 pounds, is not always able to overwhelm players with his size. However, Bart uses his speed to his advantage to make plays on a weekly basis.

Bart also was a starting tackle for the offensive line in the season opener before LHS head coach Steve Rampy elected to keep his players on one side of the ball. 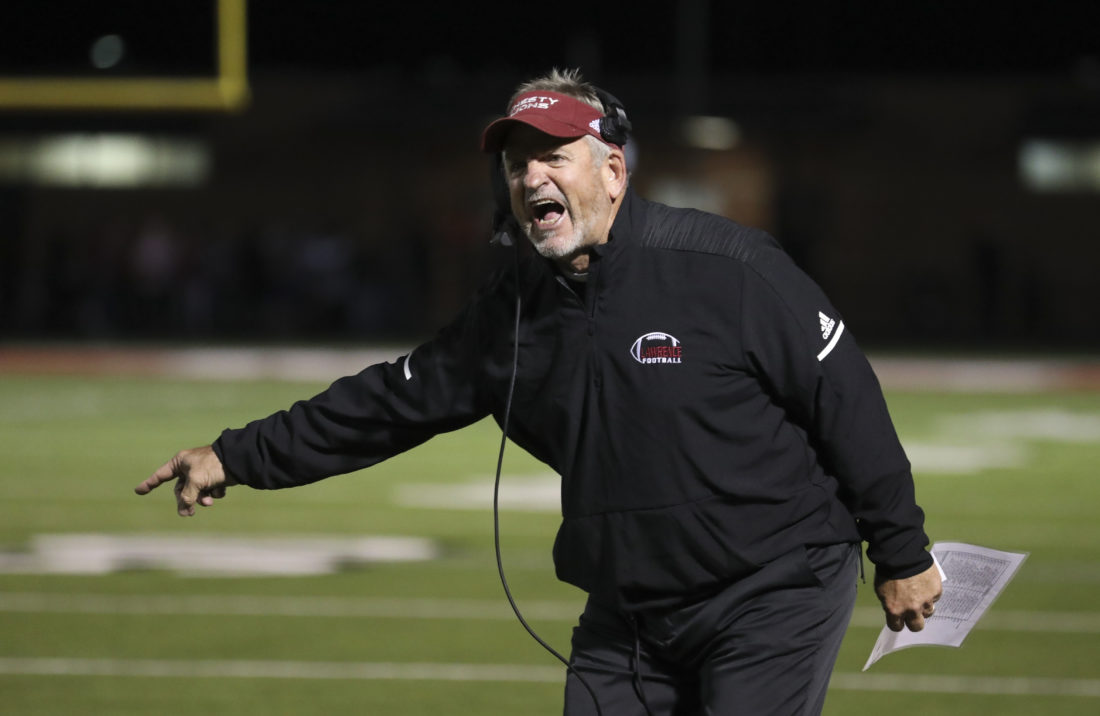 Lawrence High head coach Steve Rampy yells at one of his receivers during the second quarter on Friday, Oct. 12, 2018 at Lawrence High School.

Bart believes that time spent on the offensive line actually benefited his play as a defensive end.

But his most memorable football play is one that took place against Free State last season, which illustrates the importance of this season finale.

“Last year, during the Free State game, I remember there was a bad snap,” Bart said. “The quarterback picked it up, and right has he stood up, me and a couple other defensive linemen were right there and brought him down. We looked up at the student section, and they were going insane.”

As a sophomore, Malone served a defensive back for the Lions during a 56-7 loss to the Firebirds in 2016. Entering his junior season, Malone transferred to FSHS and was crucial component in the team’s narrow win over LHS in 2017. 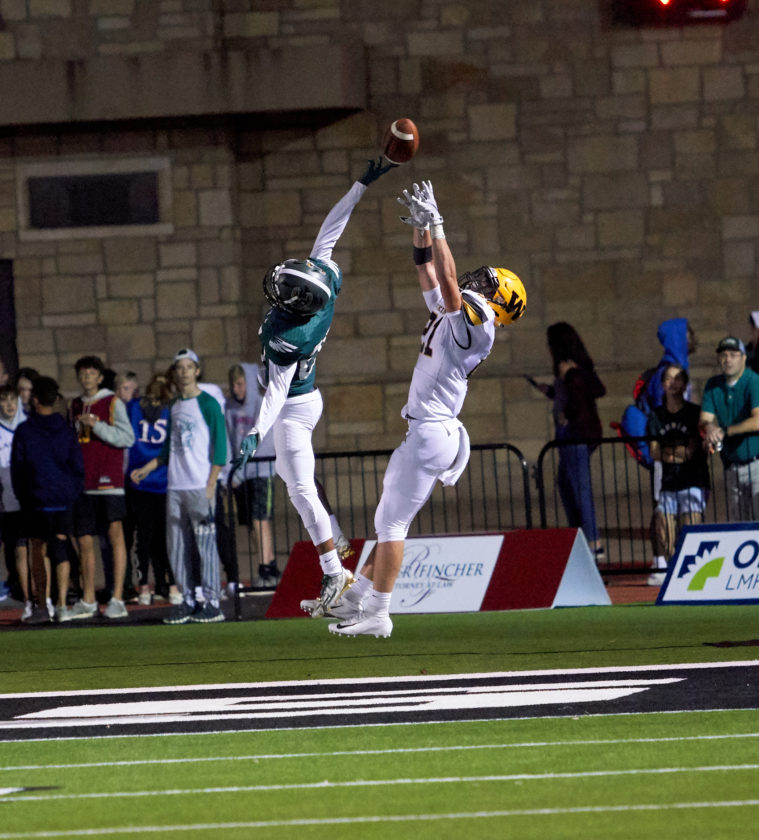 This season, Malone has started all seven games as a corner for the Firebirds.

Malone and senior cornerback Oliver Paranjothi have limited opposing pass attacks all year. Free State, which is ranked No. 2 in Class 6A via the latest poll by Kpreps, has allowed a total of 57 points this season.

The Firebirds, who are allowing just 7 points per game, began the year with three consecutive shutouts.

“We put (the corners) on an island a lot and they have responded all year,” Lisher said. “(Jaxon) is an athlete. He’s got speed and football smarts. You put all that together, and it makes him a pretty good corner.” 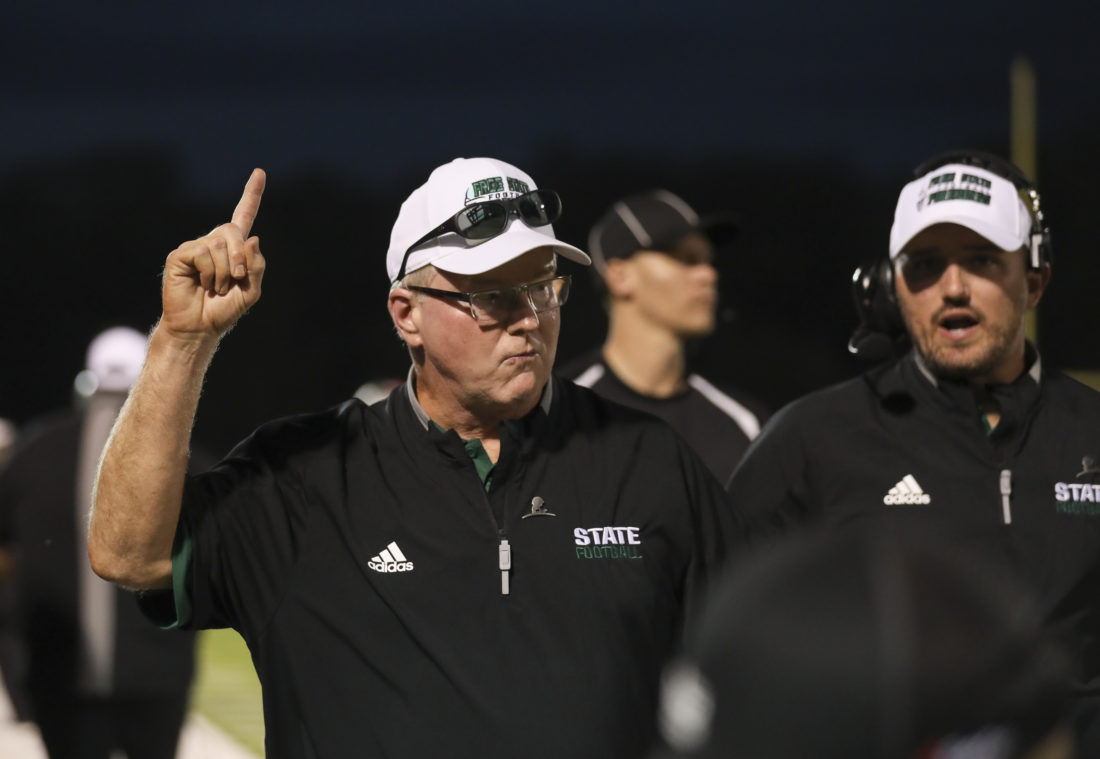 Lisher, who used to coach at Lawrence High, treats the City Showdown as just another football game.

The Firebirds have claimed two consecutive victories over the Lions. Lawrence’s last win came in 2015 when the team notched a 14-12 victory over Free State on Sept. 28. It is Free State’s only loss to LHS in the previous six meetings.

But Friday’s outing has postseason implications for the Firebirds, who have a chance at home-field advantage. FSHS must defeat LHS by at least 13 points, while Derby can not win by 7 or more points against Maize.

Still, the players certainly want to win the latest installment of this rivalry.

“It is going to be a big game,” Malone said. “If you lose, you don’t get to have bragging rights.”

Tonganoxie (5-2) takes its five-game win streak to Ottawa (0-7) for the season finale.

Senior running back Korbin Riedel is on the verge of a rushing milestone, as he has recorded 898 yards on 171 yards. Riedel has carried the ball at least 29 times and accumulated at least 100 yards in each of his last five outings. Over that span, Ridel has notched 11 scores for the Chieftains.

Baldwin (2-5) will attempt to break a three-game losing skid against Spring Hill (3-4) at BHS.

The Bulldogs have scored a total of 9 points over the last three weeks, including a pair of shutouts. Spring Hill, meanwhile, is coming off a 24-22 win over KC Piper. Baldwin dropped a 51-7 decision to KC Piper in the second week of the regular season.

Eudora would like to end the regular season on a high note.

Eudora (1-6) travels to Fort Scott (5-2) following its 35-0 loss to Paola last week. It marked the third time that the Cardinals have been held scoreless this season. Entering the season finale, Fort Scott has won three consecutive games.

Perry-Lecompton (5-2) will look to bounce back from its second loss of the year, as it squares off against Bishop Ward (0-7) in the final game of the regular season.

Senior Dalton Kellum has led the Kaws with 1,100 rushing yards and 15 touchdowns on 153 attempts through seven games. Through the air, Kellum has also thrown for 451 yards and five scores. Perry-Lecompton was shut out in last week’s loss to Hayden, which marked the first time the team had been held to under 24 points.

The Eagles have lost three straight contests, including a 46-0 defeat at the hands of Cair Paravel last week. Two weeks ago, St. Mary’s Academy (4-1) recorded a 64-14 win over Cair Paravel.