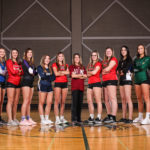 Maceli was a key component of a nine-person senior class that notched Lawrence’s first state title in 23 years. Maceli recorded 423 digs, posting an average of 4.7 digs per set. Maceli was named the Sunflower League player of the year.

It was only fitting that Scarbrough brought the Lions back to the top of Class 6A. Scarbrough was a senior on the 1995 LHS volleyball team, the last one to win a state title. The Lions went 38-2 under Scarbrough, who was named the 6A coach of the year.

Emma Boulton, Veritas — Boulton orchestrated the Veritas offense as a setter. She tallied 584 assists on the year, and she also led the team in aces. Boulton demonstrated her versatility as a hitter and a passer for the Eagles.

Audrey Flowers, Baldwin — The Bulldogs were led by Flowers, who finished with a team-high 206 kills on a .110 hitting percentage. Flowers, a senior, was also the team leader in aces with 34, even though she played through a back injury. She also recorded 33 blocks for Baldwin.

Riley Foltz, Eudora — In her senior season, Foltz was the offensive player of the year for the Cardinals. Foltz, an outside hitter, logged 327 kills on a .265 hitting percentage, posting an average of 3.6 kills per set to lead the team.

Kaitlyn Hamilton, Free State — The junior outside hitter collected 358 kills on a .349 hitting percentage, which ranked third in the Sunflower League. Hamilton, who is verbally committed to Indiana State University, notched 96 digs and 24 aces for Free State.

Rachel Hickman, Free State — Hickman is headed to Kansas after a prolific career with the Firebirds. Hickman set a career record in kills with 1,092, including 304 kills in her senior season on a .292 hitting percentage. Hickman’s mark ranked sixth in the Sunflower League.

Taylor Knipp, Tonganoxie — Over the course of a 36-game season, Knipp was Tonganoxie’s most consistent player with hitting and serving. Knipp logged 130 kills, 41 aces and 25 solo blocks for the Chieftains. The THS middle hitter was also named to the All-Frontier League second team.

Talisa Stone, Perry-Lecompton — Stone led the Kaws in almost every category this season as a six-rotation player. The senior delivered 256 kills, 206 digs, 65 blocks and 50 aces on a .357 hitting percentage. Stone also posted a serving percentage of 90.4 percent.

Sammy Williams, Lawrence High — In her final season with LHS, Williams delivered a number of powerful kills. Williams, a middle hitter, finished with 259 kills on a .368 hitting percentage in a total of 90 sets. Williams also registered 64 total blocks, including 38 solo blocks.

Laura Willoughby, Lawrence High — The senior setter made the LHS offense go throughout the dominant 2018 campaign. Willoughby accumulated 884 assists, which equated to an average of 9.8 assists per set. Willoughby was a co-captain for the Lions, who won a Sunflower League title with a 12-0 clip.