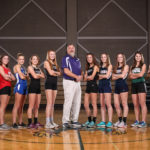 Hiebert was consistently dominant throughout her junior campaign with the Cardinals. She never finished lower than fourth in any race, and she posted a season-best time of 19:31. Hieber won three races, including the league meet, and placed third at the 4A state meet.

For the third time in four years, Baldwin’s girls cross-country team finished at the top of Class 4A. None of the Bulldogs’ seven runners finished outside the top 26 to capture another team title under Spielman.

Blaise Ball, Perry-Lecompton — The Kaws were led by Ball, who finished in the top 20 in all but one meet this season. Ball finished ninth at the Big 7 league meet with a time of 20:40, while claiming 20th at the 3A regional meet.

Natalie Beiter, Baldwin — During her four-year career, Beiter’s been a part of three team crowns, the most recent one this past fall. Beiter finished 17th at the state meet, while placing 11th at regionals and notching ninth at league.

Kristi Chambers, Tonganoxie — As the lone state qualifier, Chambers was a crucial component to Tonganoxie’s cross-country team this season. Chambers placed first at the Lansing Invitational and notched ninth at the regional meet.

Sophie DeWitt, Lawrence High — The Lions did not send anyone to the state meet, but DeWitt was routinely the team’s leading runner this fall. DeWitt also placed 10th during a meet at the Shawnee North Community Center.

Sabrina Eicher, Bishop Seabury — Despite some health issues, Eicher was the team’s top runner in every meet this season. The junior medaled at two races, placing 12th at regionals and was a strong leader as well.

Erin Fagan, Free State — Free State’s second-best runner notched a pair of medals in the postseason of her junior season. Fagan finished 11th at the Sunflower League meet and claimed fifth at the regional meet.

Reagan Hiebert, Eudora — As Eudora’s No. 2 runner, Hiebert brought home plenty of hardware in 2018. Hiebert finished eighth at the state meet with a season-best time of 20:25, and she was also named a first-team selection in the Frontier League.

Jana Landreth, Baldwin — In her first season, Landreth led the way by claiming ninth at the state meet. She also finished first at regionals, claiming fourth at the Frontier League meet. Landreth’s best time was a 20:09.

Julia Larkin, Free State — Larkin left a lasting legacy by becoming just the fifth runner in the history of FSHS’ girls cross-country team to medal at state in all four years. She placed 10th at the 6A state meet with a season-best time of 19:36.5. Larkin also claimed fourth at regionals and notched seventh in the Sunflower League.

Ambrynn Stewart, Baldwin — Stewart, a sophomore, finished 11th at the state meet to earn a medal and help the Bulldogs win a team title. Stewart also placed seventh at regionals and claimed sixth at the league meet. Her best time this season was a 20:22.