Kansas’ Pompeo could swing Senate race, but will he run? 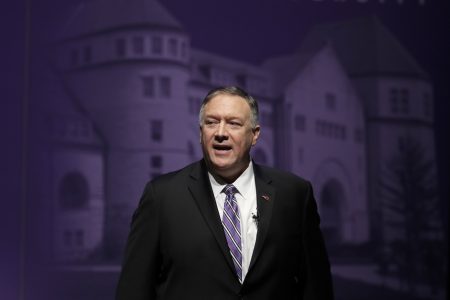 Secretary of State Mike Pompeo answers a question from an audience member after giving a speech at the Landon Lecture series at Kansas State University Friday, Sept. 6, 2019, in Manhattan, Kan. (AP Photo/Charlie Riedel)

MANHATTAN — U.S. Secretary of State Mike Pompeo didn’t address speculation that he might run for the Senate in Kansas during a Friday college lecture in his home state, though some who attended left convinced it’s still possible.

Pompeo focused his speech at Kansas State University on arguing for protecting a narrower range of human rights around the world. Answering questions from the audience of about 900 after the speech, the closest he came to addressing the speculation that he’ll run for the seat held by Republican Sen. Pat Roberts, who isn’t seeking a fifth term, was to say, “I love the job that I have, trying to deliver security for the American people every day.”

Yet, weeks after Pompeo said a run is “off the table,” he is still creating a buzz and looming over the race, as only he has enough name recognition and support among Kansas conservatives to afford to wait until next June’s filing deadline to decide.

Three Democrats and four Republicans are already actively running for Roberts’ seat, and several others are expected to join them. If he does run, Pompeo would enter the race as the favorite.

“I wouldn’t count him out,” said Jane Deterding, a 57-year-old Wichita banker who said she has known Pompeo and his wife for two decades. She said she made the two-hour trip partly on the chance that he might say something definitive.

Other candidates don’t have the luxury of waiting and the field is likely to grow even bigger, with GOP Rep. Roger Marshall of western Kansas expected to announce his candidacy Saturday at the state fair.

“It’s the Pompeo decision, and then everything else trickles down,” said Joe Kildea, a vice president for the conservative interest group Club for Growth.

The GOP hasn’t lost a Senate race in Kansas since 1932, but many Republicans worry about a repeat of the governor’s race last year. Kris Kobach, a nationally known advocate of tough immigration policies, narrowly won a crowded primary, alienated moderates and lost to Democrat Laura Kelly. He launched his Senate campaign in July.

For Kobach’s GOP detractors, Pompeo would solve their perceived problems. His entry would likely clear most of the Republican field, and GOP leaders believe Pompeo would have no trouble winning in November 2020, making it easier for Republicans to retain their Senate majority.

During an interview Friday with Kansas City radio’s KCMO, Pompeo said he’s been “unambiguous” about his plans to remain on as the nation’s top diplomat. And some fellow Republicans concede that Pompeo, a former congressman and CIA director, has reasons not to run, including the prestige that comes with being the nation’s top diplomat. He’s currently dealing with weighty issues such as new sanctions on Iran from the Trump administration, a tariff war with China and questions about whether hopes for nuclear talks with North Korea are fading.

“I think he likes his job,” said Brent Lehner, a 54-year-old property manager from Wichita who also came to see the speech. “I think he feels a sense of duty to the position.”

Pompeo used Friday’s lecture to promote a pet project. Pompeo has frequently lamented the expansion of human rights to include what he and many conservatives believe are issues that fall outside what should be considered “God-given.” Critics, including many in the human rights community, fear he intends to stop the U.S. from promoting certain rights abroad, including gay and abortion rights, among others.

Pompeo has been criticized for creating a commission to study and highlight the “unalienable rights” envisioned by America’s founders at the creation of the United States.

“When rights proliferate, we risk losing focus on those core unalienable rights,” he said.

He took aim at international organizations and treaties that enshrine certain rights as universal, arguing that the proliferation of rights had diminished their importance and that the distinction between fundamental rights and “more political preferences or priorities” has become blurred.

“This is an imperfect analogy, but the 13th ice cream cone isn’t as good as the first one was,” he said.

Audience members didn’t ask Pompeo about the Senate race in the question-and-answer session after his 18-minute address. Much of the interest him running comes angst within the GOP over Kobach’s candidacy.

Kobach, who served as Kansas’ secretary of state but first built his national profile on immigration issues, has argued that as a Senate nominee, he’d benefit from the higher turnout that normally comes with a presidential election year and a greater focus on issues such as immigration.

Other GOP candidates include Kansas Senate President Susan Wagle, Dave Lindstrom, a Kansas City-area businessman and former Kansas City Chiefs player, and Bryan Pruitt, a conservative gay commentator. Also, Marshall has been flirting with running for months, and other potential Republican candidates include Alan Cobb, president and CEO of the Kansas Chamber of Commerce, and Matt Schlapp, the American Conservative Union’s president.

The Democratic candidates with active campaigns are former federal prosecutor Barry Grissom, and former Rep. Nancy Boyda and Usha Reddi, a city commissioner in the northeast Kansas city of Manhattan.