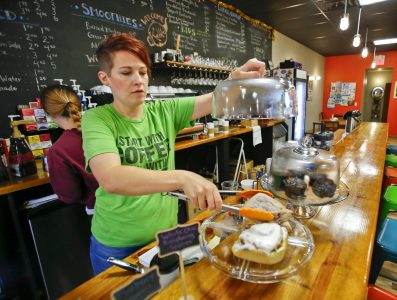 Mandy Fincham and her husband, B, run the Kettle in Beloit. Some experts think quality-of-life initiatives like their cafe and wine bar make a difference between small towns shrinking smartly or withering badly.

Phillipsburg — The opening of a child care center attracts little notice in a city or suburb.

In rural Kansas, it’s cause for celebration.

The focus on young families, and the hope that represents, is remarkably rare in small towns fighting for survival against forces largely beyond their control.

No matter how scarce, said Iowa State University social scientist Dave Peters, it’s an essential ingredient in what he and his research team refer to as a “shrink smart” town.

That’s Peters’ term for a place residents remain committed to improving even as it gets smaller.

“Shrink smart communities are those that saw faster-than-average declines in population but also had above-average gains in quality of life,” Peters said.

Small, rural communities can do little to reverse decades-long population trends, Peters said. But they can improve the quality of life for the people who stay. To start, they need a core group of people determined to confront challenges rather than letting nature take its course.

“That’s really what it takes,” Peters said. “You need a lot of people to step up and take a leadership role. It’s not going to happen otherwise.”

The research from Peters and his team confirms that shrink-smart towns are rare. Only seven of the 99 Iowa communities they’ve studied have earned the distinction. Far more common, Peters said, are places where people have all but given up. He said they tend to leave the heavy lifting to small groups of elected officials, whom they’re quick to blame when new problems develop.

“In these declining — or withering — towns, as we like to call them, once there’s a failed project, the community turns nasty,” Peters said. “Then, of course, nobody wants to take the risk of trying to do anything.”

Peters and his team haven’t studied any communities outside of Iowa. So, there are no verifiable shrink smart towns in Kansas. Still, some that the Kansas News Service visited appear to have at least some of the qualifying characteristics.

Phillipsburg, for example. It’s a town of about 2,400 in northwest Kansas where a couple of quality-of-life projects appear to be paying dividends.

One initiative addresses an urgent need for quality child care, said Nick Poels, the head of Phillips County’s economic development organization. The community made it a priority at the urging of business leaders, who, Poels said, kept getting the same question when interviewing job candidates: What’s the availability of day care in your community?

Tired of not having a good answer, the community went to work. A cross-section of residents pitched in to transform an old convenience store into a child care center built to the state’s exacting licensure standards. To help with the costs, they hustled up a grant from the Dane G. Hansen Foundation, which exists solely to help pay for community improvement projects in 26 northwest Kansas counties.

“It was a no-brainer; we had to do a project like this,” Poels said.

The shortage of available child care is a common problem in rural Kansas. So, it wasn’t surprising when more than a dozen communities dispatched envoys to Phillipsburg in August to inspect the new center and get advice from Poels about how they might build their own.

Tammy Simons made the more than 400-mile round-trip from Leoti, a town of about 1,500 in west-central Kansas where a lack of day care slots hinders efforts to attract teachers, doctors and other critically needed professionals.

“We can’t attract the people that we need to keep the community running,” Simons said.

A second initiative is aimed at solving another common problem in rural Kansas — the loss of young people.

NexTech, a rural telephone company that’s grown into a communications powerhouse, is partnering with other businesses, the Hansen Foundation and its customers on a program that provides high school and college students with paid summer internships. In just eight years, participation in the program has ballooned from four to 84 students.

Jacque Beckman, director of the NexGen program, said the goal is to convince young people they don’t have to leave rural Kansas to find a rewarding career.

“If you’re a high school student, this may be your first opportunity to understand what’s available in your hometown,” Beckman said.

Recalling that she received luggage as a high school graduation gift, Beckman said parents and teachers in rural Kansas have been sending the wrong signals for decades.

“We’ve been in the habit of telling (young) people, ‘Hey, there really isn’t anything here for you,'” she said.

Several of this year’s interns said the experience changed their perceptions. It prompted them to at least consider the possibility of staying in rural Kansas, or perhaps returning after college.

“Definitely,” said Rachel Muirhead. “Before this internship, I probably would have said that I would never come back to Hays.”

But, Muirhead said, her work at the Hays Arts Council showed her that “Hays has a lot to offer, especially with the arts.”

Jillian Bohl said her internship at the Phillips County Hospital reinforced what had been a tentative decision to return to Phillipsburg after medical school.

“This is where my roots are,” Bohl said. “I want to come back and take care of families.”

There are also signs of shrink-smart thinking in Beloit, a community of 3,800 about 80 miles southeast of Phillipsburg. A young couple — B and Mandy Fincham — thought the town needed a place where people could gather for coffee during the day or meet for a glass of wine or craft beer in the evening.

So, Mandy quit her grant-writing job to open the Kettle, a combination coffee shop, cafe, wine bar and music venue in a renovated building downtown.

“We just thought, we don’t want to be 80 and have regrets,” Mandy Fincham said. “So we decided to try it.”

The Kettle has loyal customers, but it doesn’t make a lot of money. So, the couple and their two children need the salary B Fincham earns as an elementary school teacher to make ends meet.

Even so, the Kettle meets the Finchams’ definition of a successful buisness because it fills a need in their community.

“Time and again,” B Fincham said, “people have told us we’re a cultural hub.”

Shrink smart towns depend on people like the Finchams and those who mobilized to build the child care center in Phillipsburg.

Too often, said Peters, the rural sociologist, communities fighting for survival overlook those opportunities. Instead, they focus on recruiting that one new business that can deliver dozens — perhaps hundreds — of new, good-paying jobs.

Spending money on incentives and industrial parks, he said, is a “risky strategy” because it precludes investments in quality-of-life initiatives that can be more effective recruitment tools. Communities can thrive more, Peters said, by investing in social needs so that they can sell themselves as good places to live and work.

“They see how progressive your town is,” Peters said. “That positions you better to go after a new firm.”

Kansas among 14 states with most rapid COVID-19 spread