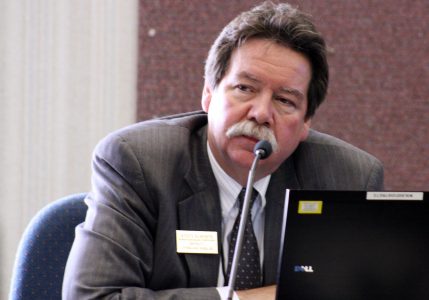 Kansas State Board of Education member Steve Roberts of Overland Park listens to comments by fellow board member Carolyn Campbell on Tuesday, May 14, 2013, in Topeka, Kan. (AP Photo/John Milburn)

TOPEKA — A Republican member of the Kansas State Board of Education who shares retiring GOP U.S. Sen. Pat Roberts’ last name is running to replace him in Washington.

Steve Roberts of Overland Park filed paperwork Tuesday with the state to claim a spot on the ballot in the August primary.

Pat Roberts is not seeking re-election after four terms.

Steve Roberts is a math tutor who developed his own online math course who has served on the state school board since 2013. Running for the Senate means he can’t seek another term on the board in 2020.