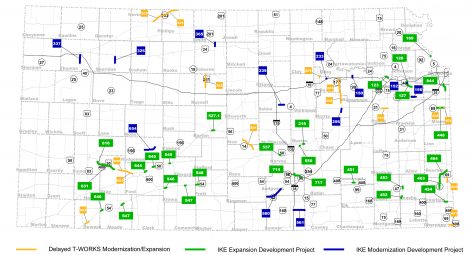 This map shows the development and construction pipeline for the Kansas Department of Transportation's Eisenhower Legacy Transportation Program, which was revealed Thursday, May 14, 2020.

The expansion of the South Lawrence Trafficway is on a list of 40 projects that the Kansas Department of Transportation plans to pursue within the next 10 years.

Kelly said putting projects in the state’s development pipeline allows KDOT to begin the advanced work needed to prepare projects for construction, such as designing, acquiring rights-of-way and moving utilities. Kelly said that the state hasn’t added any major projects to its development pipeline since 2011, and that the plan will be critical for the state’s economic recovery from the coronavirus pandemic.

“They are practical, right-sized projects that can be advanced to construction quickly to employ many Kansans,” Kelly said. “I’ve directed the Kansas Department of Transportation to explore all options for accelerating project delivery for these and for the delayed T-Works projects (from the state’s last transportation plan), which we remain committed to constructing.”

Kelly said the 40 projects included in the new plan will also provide the state flexibility to capture federal stimulus funds, should they become available. Kelly said while the projects are new additions to the development pipeline, they will address long-standing needs.

The new transportation plan includes two expansion projects related to the SLT — the expansion of the western leg of the roadway and a new Kansas Turnpike Authority interchange. The plan calls for a four-lane freeway that is estimated to cost $130 million and a new interchange estimated to cost $73 million. The full list of projects is available on KDOT’s website, ksdot.org.

Lawrence city leaders have long advocated for the expansion of the SLT, especially in light of high crash rates on the western leg. The portion of the SLT east of Iowa Street was finished in November 2016, completing the final segment of the bypass project. The eastern leg is a four-lane divided highway, but the leg west of Iowa Street is currently only two lanes.

The description of the project on the transportation plan states that the SLT expansion will extend the four-lane road farther, improving safety and increasing economic opportunities for the region. More specifically, it states that the expansion would improve safety for travelers entering and leaving the nearby Youth Sports Complex. There were 20 accidents at the SLT’s intersection with 27th Street/Wakarusa Drive over a 20-month period in 2018 and 2019, according to KDOT.

Lorenz said development work will begin for all the projects on the list, but she said KDOT is not committing construction funds to any of the projects yet. She said the source of revenue for the projects remains federal funds, motor fuel taxes and sales taxes.

As far as deciding which projects move forward for construction, Lorenz said that will be a separate process that considers many factors, including how ready the project is, how difficult right-of-way is to acquire, and the partnership that KDOT has established with the community. Before the coronavirus pandemic, she said that included the ability for the community to bring money to the table.

“We recognize that we are in a shifting landscape,” Lorenz said. “Those are all things we will still consider, but we may be taking a harder look at the jobs the project could create.”

KDOT began a three-year environmental impact study on the SLT lane expansion project in September 2018, and the study will be completed next year. Under the study, the expansion options currently being considered include both an open-access and partially tolled highway of either four or six lanes. KDOT is currently conducting virtual meetings to collect public feedback on the options.

The new transportation program, nicknamed “IKE” after its namesake and native Kansan, President Dwight Eisenhower, will be in place from 2020 to 2029. Under a new rolling format, projects will be selected for development every two years, according to a KDOT news release. The release states that the format enables the state to address the most pressing needs and adjust to fluctuating revenues.