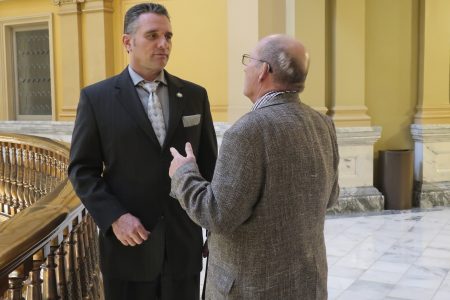 In this photo from Thursday, March 19, 2020, Kansas state Sen. Ty Masterson, left, R-Andover, confers with Rep. Ron Howard, R-Wichita, in the Statehouse rotunda in Topeka, Kan. Masterson and other Republicans are worried about the power Democratic Gov. Laura Kelly can wield in fighting the coronavirus pandemic now that she's ordered the state's schools closed for the rest of the semester. (AP Photo/John Hanna)

Topeka — Some Kansas legislators say they didn’t understand how much power the governor has in emergencies until Democratic Gov. Laura Kelly closed K-12 schools for the rest of the semester and ordered a six-week halt to new evictions and mortgage foreclosures amid the coronavirus pandemic.

Kansas is typical in granting its governor broad, temporary powers to deal with an emergency. Other governors have closed schools, directed non-essential businesses to shut down temporarily and banned public gatherings. Kansas law allows the governor to do the same, and conservative Republican lawmakers fear how far Kelly might go. They’re likely to push to rewrite the law on a governor’s emergency powers after the immediate crisis passes.

State law permits the governor to cordon off a city, bar people from entering or leaving and restrict their movements within its limits. She can suspend state regulations, force people to evacuate their homes, commandeer private property and ban the sale of alcohol.

And, under a state of emergency, the governor can exercise powers “necessary to promote and secure the safety and protection of the civilian population.”

“You could shut the whole state down,” said state Sen. Ty Masterson, a conservative Andover Republican.

Kansas has had two COVID-19 related deaths and dozens of confirmed coronavirus cases. The vast majority of infected people recover, and many develop mild or moderate symptoms, but some develop serious illnesses, particularly older adults and people with underlying health issues.

Kelly declared a state of emergency for Kansas last week over the outbreak. It was set to expire Friday but lawmakers, knowing the pandemic hasn’t crested, extended it to at least May 1 and allowed legislative leaders to keep extending it, 30 days at a time.

Conservatives like Masterson sought to curb Kelly’s power by adding language to the resolution extending the state of emergency to bar her from seizing property, limiting access to communities or exercising the sweeping power to do what’s necessary to protect the public. Their effort failed, but the resolution requires legislative leaders to review all of her orders and gives them power to revoke many of them within days.

Republicans who backed limiting the governor’s power argued that they want to prevent abuses. They were taken aback by Kelly’s decision to close school buildings for at least two months, rather than just a few weeks.

“We are in a situation that we have not faced before in this state,” said conservative Republican Sen. Caryn Tyson, of Parker. “Do we run reckless as leaders, or do we take a diligent look at what we are turning — authority — over to our governor?”

Democrats agree that there’s value in reviewing an emergency powers law enacted 45 years ago to see whether it can be updated or improved. Kelly said she has no problem with a re-examining the law but said it should be done thoughtfully “rather than on the fly.”

She also said in a recent interview, “They never bothered to look until it was me.”

“They need to quit being childish and get focused on getting the things in place to help our citizens now,” said Sen. Tom Holland, a Baldwin City Democrat. “It starts with our schools, our public places, our big social events — concerts, gatherings, whatever. Yeah, if you’re going to try to flatten the curve, you’d better get on those things in the beginning.”

And Rep. Don Hineman, a Dighton Republican, said Kelly’s order to close schools for the rest of the spring “put us ahead of the curve.”

“That is an absolutely necessary step,” he said. “It’s only a matter of time before other states follow our lead.”

But even some lawmakers who thought conservatives were trying to go too far in curbing the governor’s power said the coronavirus pandemic raises questions about a governor’s authority because it is far more widespread than disasters such as tornadoes or flooding.

“You’re talking about something that is invisible. And where will it pop up next? Where will (we) see new cases? Who’s spreading it?” said House Speaker Pro Tem Blaine Finch, an Ottawa Republican.

“All of those questions make it more difficult and, I think, people even more afraid of an exercise of authority that may go beyond, ‘We’re going to close downtown because a tornado came through and, you know, there are live power lines in the street.'” 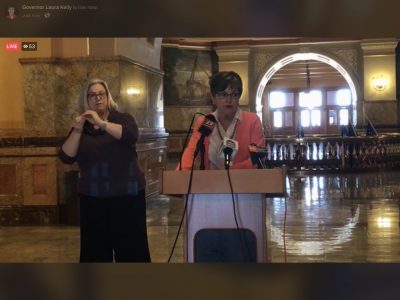