Kansas Republicans focused on restricting abortion through regulation instead of ban 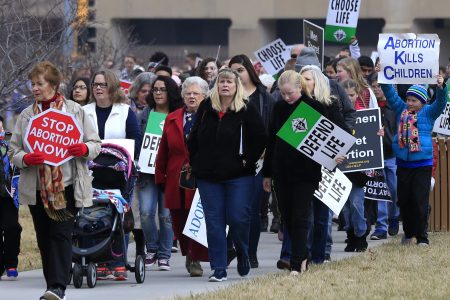 TOPEKA — Top Kansas Republicans want to head off any push for an abortion ban in the state even as they make overturning a Kansas Supreme Court ruling that protects abortion rights a top priority.

The GOP-controlled Legislature expects to consider a proposed amendment to the Kansas Constitution during the annual 90-day lawmaking session set to convene Monday. It’s a response to the state high court’s ruling in April that the state’s Bill of Rights makes access to abortion a fundamental right.

“Our No. 1 focus is the constitutional amendment,” said Kansas House Majority Leader Dan Hawkins, a conservative Wichita Republican. “This is not going to be about banning abortions. It’s going to be about putting it back where it’s supposed to be, and that is with the Legislature.”

The debate in Kansas is coming after other states with Republican-led legislatures, including neighboring Missouri, moved to ban abortions early in women’s pregnancies. GOP leaders and the state’s most influential anti-abortion group, Kansans for Life, are pursuing a proposal that would allow legislators to regulate abortion as they see fit.

They’re being pragmatic: They worry that a ban is unlikely to get through the Legislature, and that even if it did, it would almost certainly fail a required statewide vote. They argue that it does the anti-abortion movement no good to push something that legislators or voters would reject.

If the constitution doesn’t change, state courts still can invalidate a raft of restrictions enacted over the past decade — even if the U.S. Supreme Court overturns its historic 1973 Roe v. Wade decision legalizing abortion nationwide.

“Bans on abortion in other states have not been successful. Even in some of the most pro-life states, they’ve not been successful, and in states where one has passed, they’re being tied up in court,” said Jeanne Gawdun, a longtime Kansans for Life lobbyist. “You’re effectively not achieving anything.”

Legislators are looking to Kansans for Life for the proposed language of an amendment, and the group was still drafting it as lawmakers prepared to open their session.

Supporters will need two-thirds majorities in both chambers to get a measure put on the statewide ballot. It would then need approval from a simple majority of voters.

The Kansas Legislature has had anti-abortion majorities in both chambers for more than two decades.

However, abortion opponents’ political influence dipped when Democratic Gov. Laura Kelly, a strong abortion rights supporter, was elected in 2018. Anti-abortion lawmakers last year narrowly failed to override Kelly’s veto of a bill that would have required abortion providers to tell patients about a disputed treatment to stop a medication abortion after it’s been started.

“If a constitutional amendment passes saying there’s no right to abortion, then the minute Roe v. Wade is undermined or overturned, people in Kansas will lose their right to abortion, period,” Elise Higgins, vice president of the Kansas Abortion Fund, said.

Meanwhile, at least a few abortion opponents want lawmakers to put an abortion ban on the ballot. They argue that the state constitution needs to make a strong statement in favor of protecting human life and that doing anything less makes the state complicit in terminating pregnancies.

“An amendment that only regulates but does not prohibit all abortion writes into the constitution the principle that abortion may be permitted,” Pat Goodson, a longtime anti-abortion activist and founder of Right to Life of Kansas, told a committee reviewing the issue. “It denies the humanity of unborn humans and jeopardizes the rights of all humans.”

Gawdun and other abortion opponents argue that Kansans for Life’s more incremental strategy has worked. The number of abortions performed in Kansas each year has dropped more than 40% over the past two decades, from a peak of more than 12,400 in 1999 to about 7,000 in 2018, the latest state health department statistics available.

State Rep. Kyle Hoffman, a conservative southwest Kansas Republican, said fellow abortion opponents fail to change the state constitution, abortion restrictions will fall to court challenges and, “We’ll be back to being one of the most pro-abortion states in the United States.”

“I don’t think we can get a full ban through the Legislature, not a two-thirds majority,” he said.