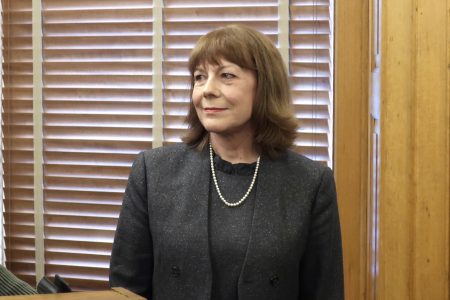 TOPEKA — The Kansas Supreme Court plans to swear in a new justice Jan. 24.

Evelyn Wilson is set to take her seat on the seven-member high court a little more than a month after Gov. Laura Kelly announced Wilson’s appointment. The court is planning to convene a special session at 2 p.m. in its chambers in Topeka, with Chief Justice Marla Luckert presiding.

Wilson has been a district judge in Shawnee County since 2004 and its administrative judge overseeing court operations since 2014.

She is replacing former Supreme Court Justice Lee Johnson, who retired in September.

Kelly has another appointment to fill because former Chief Justice Lawton Nuss retired in December.

A lawyer-led nominating commission plans to interview 17 candidates for Nuss’ seat Jan. 16 and 17. It expects to submit three finalists to Kelly, who would have until March 17 to make the appointment.