TOPEKA — Kansas’ elections chief is pushing to make the state’s central voter registration database more secure by changing how counties tap into it, but some officials are nervous about what they see as a big project in a busy election year.

Secretary of State Scott Schwab has told county election officials that he wants them to use dedicated tablets, laptops or computers not linked to their counties’ networks to access the state’s voter registration database. He says Kansas is getting $8 million in federal election security funds that could be used to cover the costs.

Schwab, a Republican and former Kansas House member from the Kansas City area who became the state’s top elections official last year, contends such a setup will decrease the likelihood of foreign nationals, foreign governments or domestic hackers gaining access to voter registration records. His idea has bipartisan support. 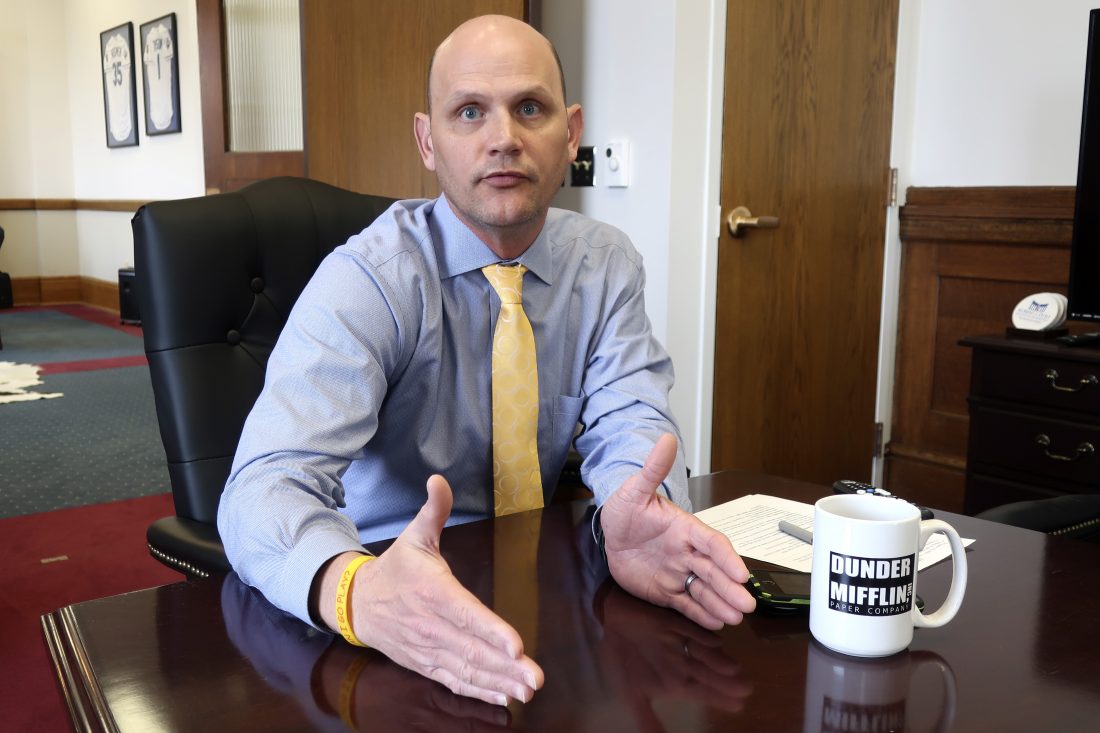 In this Tuesday, Feb. 11, 2020, photo, Kansas Secretary of State Scott Schwab answers questions during an interview with The Associated Press at his office in Topeka, Kan. (AP Photo/John Hanna)

In September 2017, the U.S. Department of Homeland Security told officials in 21 states that their election systems had been targeted by hackers before the 2016 presidential election. Kansas wasn’t on the list, but Schwab said in an interview last week that “every area of government gets pinged thousands of times.”

Still, even some county election officials who agree that Schwab’s initiative would make voter registration records more secure see it as a huge undertaking, incorporating the different computer and voting systems of 105 counties.

“We’d have to rewire our entire office,” said Douglas County Clerk Jamie Shew, a Democrat who has held his elected post in northeast Kansas since 2005. “There’s serious logistical challenges.”

Schwab told about two-dozen lawmakers during a recent Statehouse lunch that he does not think his initiative will be difficult to fulfill. He predicted that they would be required only to plug in a dedicated device and isolate it from the normal county network.

“Right now, counties maintain that list on a county computer that can, maybe, be touched by the appraiser’s office, where some young intern clicks on an email that says, ‘Click here for a free X-Box,'” Schwab said. “This is probably the best way that we can defend our database.”

Kansas Senate Minority Leader Anthony Hensley, a Topeka Democrat, said the move is “probably a good idea,” and the secretary of state’s proposal has drawn support from his predecessor, conservative Republican firebrand Kris Kobach, who said it would be “an additional level of security.”

Kobach successfully pushed for some of the nation’s toughest voter ID laws, including a now-on-hold proof-of-citizenship requirement for new voters, making Kansas a magnet for lawsuits.

Schwab’s initiative raises eyebrows because he’s facing criticism on another front from Democrats and some officials of both parties in Sedgwick County, which is home to the state’s largest city, Wichita. Schwab has said it will take another year to implement a 2019 law that will permit counties to allow voters to cast their ballots at any polling place on Election Day.

The Kansas Democratic Party and the Democratic National Committee sued Schwab on Friday in state district court in Topeka, arguing that Schwab is “in dereliction of his clear legal duties.”

Some Wichita-area officials wonder how Schwab can declare that the state isn’t ready for a “vote anywhere” system after they’ve prepared for it while also pushing counties to install new equipment with a different link to the state’s voter registration database.

Hensley suggested that Schwab is being “kind of inconsistent.”

“If we can do it for one situation, why not the other?” said state Sen. Oletha Faust-Goudeau, a Wichita Democrat and leading supporter of the “vote anywhere” law. “If we’ve got money and if we’ve got all the ways to implement it, I keep saying what’s good for the goose is good for the gander.”

Schwab’s initiative is a one reason Sedgwick County Election Commissioner Tabitha Lehman opposed and effectively killed a bipartisan bill this year to require her county to let voters cast their ballots at any polling place in this year’s elections. She said in an interview that her office is already going to have to change its operations because of Schwab’s security plans.

“We’re running out of power outlets in our building,” Lehman, a Kobach appointee, added. “We’re in the bottom floor of a historic building built in the 1800s.”

Schwab said counties shouldn’t need new work stations or staff, but his office is still in the early stages of planning, so county officials said they don’t have much information about what will be required.

In Ellis County in western Kansas, the elected county clerk, Donna Maskus, a Democrat, called stand-alone computers “a good option but added, “It’s just getting all of that set up.”

“You’re talking every county clerk in the state, and to me, that is a big project,” she said.