Kansas Secretary of State Scott Schwab speaks to legislators from south-central Kansas about implementing a 2019 law that permits counties to allow voters to cast their ballots at any polling place, Wednesday, Feb. 12, 2020, at the Statehouse in Topeka, Kan. The Republican secretary of state says his office needs another year to draft the regulations to ensure that electronic voter registration records remain secure and county computer systems can handle and update all records at once. (AP Photo/John Hanna)

TOPEKA — Kansas’ top election official says the state needs another year to prepare before it can give voters a choice of polling places on Election Day, even though it has been nearly 10 months since the Legislature enacted a law aimed at making voting more convenient and boosting turnout.

Even some of Secretary of State Scott Schwab’s fellow Republicans believe that at least Sedgwick County, which is home to the state’s largest city, Wichita, is ready to allow voters to cast their ballots at any of its dozens of polling places. Democrats accuse Schwab of dragging his feet, and one lawmaker said during a lunch meeting with him and other lawmakers Wednesday that Schwab is engaged in a “voter suppression program.”

The simmering dispute shows how voting rights issues remain contentious in Kansas even though firebrand conservative Republican Kris Kobach left the secretary of state’s office early last year after losing the 2018 governor’s race. Kobach successfully pushed for some of the nation’s toughest voter ID laws, including a now-on-hold proof-of-citizenship requirement for new voters, making Kansas a magnet for lawsuits.

Schwab said he’s being careful about allowing counties to move away from traditional polling sites, each for only a limited number of voters in a given area. He said his office is drafting “a book” of regulations required by the 2019 law to make sure that electronic lists of voters are secure and that computer systems don’t crash on Election Day, adding “I’m not going to slap something together.”

“We also have foreign nationals — foreign governments — trying to influence Kansas elections. This isn’t the time to try something new,” Schwab said during an Associated Press interview. “I think that the Iowa caucus shows you’ve got to be careful when you try to rapidly deploy new technology in an election system.”

Sixteen states, starting with Colorado in 2004, have enacted laws allowing counties to run “voting centers” rather than traditional polling places, according to the National Conference of State Legislatures. Schwab said it typically takes a state three to four years to iron out security and computer issues and even under his timetable, Kansas would do it in two.

But Schwab’s critics note that Sedgwick County already has multiple linked locations for voting in advance of Election Day. County Commissioner Jim Howell, a former Republican Kansas House member, said the voting equipment in use since 2017 was chosen with the goal of allowing voters to pick any polling place.

Howell said the county already can update its electronic voter registration records in real time using the security encryption that banks use in transferring money electronically.

“This idea — this is going (to) take us to our knees — is ridiculous,” Howell said.

State Sen. Oletha Faust-Goudeau, a Wichita Democrat, said she pushed for last year’s bill because she’s worried that some people who work on one side of Wichita and live on the other don’t have time to get back to their home polling places after work. 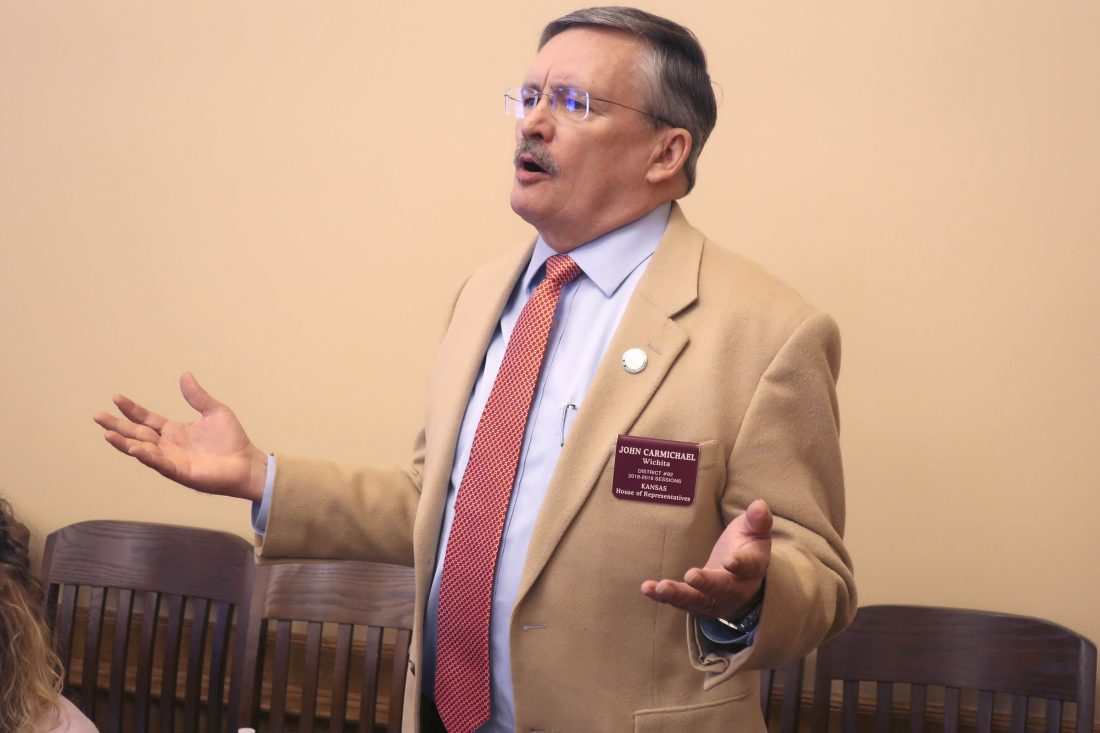 Kansas state Rep. John Carmichael, D-Wichita, challenges comments made by Republican Secretary of State Scott Schwab during a meeting of south-central Kansas lawmakers, Wednesday, Feb. 12, 2020, at the Statehouse in Topeka, Kan. Carmichael suggested to Schwab that he is engaged in “a voter suppression program” because he says his office needs another year to prepare to allow voters to pick their polling sites on Election Day. (AP Photo/John Hanna)

A bipartisan group of 26 lawmakers drafted a bill two weeks ago to require Sedgwick County to allow voters to use any polling place during the 2020 elections.

“I think what the secretary is really trying to do is to make it more difficult for folks to vote under the guise of election security,” Carmichael said after the lunch meeting.

Schwab said that Election Day is different than advance voting because there are dozens more polling locations and far more voters involved. Also, he said, if a system for logging in voters and updating their records crashes, they cannot come back the next day or request a mail-in ballot.

And the bill to force the issue in Sedgwick County appears dead. County Election Commissioner Tabitha Lehman, a Kobach appointee, testified last week that she didn’t want to be forced to move forward if “something unexpected” showed it would be “ill-advised.”

Shew said “it sounds really easy” to declare that voters will cast their ballots at any polling site, but added, “It is a huge change in the way a county operates.”