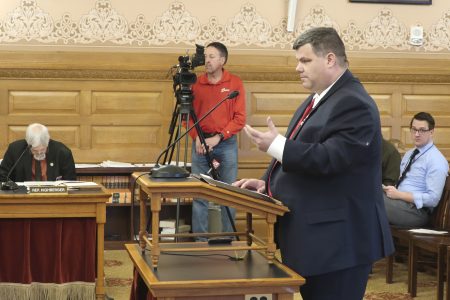 Kansas state Rep. Michael Capps, R-Wichita, testifies during a committee hearing in favor of his bill to require the national motto of "In God We Trust" to be posted in public buildings and schools, Thursday, Jan. 30, 2020, at the Statehouse in Topeka, Kan. The bill drew immediate opposition from American Atheists, which said it would stigmatize nonbelievers. (AP Photo/John Hanna)

TOPEKA — A conservative legislator in Kansas is pursuing a proposal to prevent transgender high school and middle school students from playing on sports teams aligned with their gender identities, and LGBTQ rights advocates are trying to kill it even before he can formally introduce it.

The group released a draft copy of the measure, and Capps confirmed to reporters that it was his proposal, through he said it’s still not final. The measure would require the Kansas State High School Activities Association to limit students in “gender-specific” sports to teams associated with their “gender at birth.” It would prohibit a “biological” boy from participating in a sport “conducted exclusively” for girls and vice-versa.

Woodard called the bill “repugnant,” and Ruiz decried it as “bullying” of LGBTQ students. Tom Witt, Equality Kansas’ executive director, said Capps and any potential cosponsors are “picking on little kids” and called on Capps to withdraw his proposal so that it’s never introduced.

“Bills like this are why young LGBTQ kids die by suicide,” Woodard said.

Legislators in at least seven other states are pursuing similar measures, according to the American Civil Liberties Union. In Kansas, the activities association oversees activities in 355 member high schools and 408 middle or junior high schools, most of them public. For about 10 years, it has had a policy under which schools can allow transgender students to be on teams associated with their gender identities.

Capps told reporters that his goal is “athletic protection for girls.”

He added: “There’s nothing in the language that’s designed to be harmful to the LGBTQ community.”

Bill Faflick, the association’s executive director, said it receives a notification required by the policy of “a handful” transgender students each year playing sports. He said he couldn’t comment on the legislation because he hasn’t seen it.

Witt and the two Democratic lawmakers argued that instead of pursuing Capps’ proposal, the Republican-controlled Legislature should expand the state’s anti-discrimination law to prohibit anti-LGBTQ bias in employment, housing and public accommodations. Witt’s group also has proposed legislation to ban the use of “conversion therapy” on minors.

And, in criticizing the bill as targeting kids, Witt also issued a separate statement that Capps “already has a reputation of inappropriate behavior with children.”

Capps won his seat in 2018 despite calls from fellow Republicans to end his campaign over a woman’s allegations that he allowed two of her foster children to sit in his lap and rub his chest in 2017. A state Department of Children and Families report obtained by The Associated Press, showed that the agency “affirmed” a finding of “emotional abuse” by Capps and said there were “concerns about Mike’s boundaries.”

But Capps vigorously denied the allegations, and the agency’s finding was reversed on appeal by an administrative hearing officer because the department did not “file a proper agency summary.” Capps was not prosecuted. 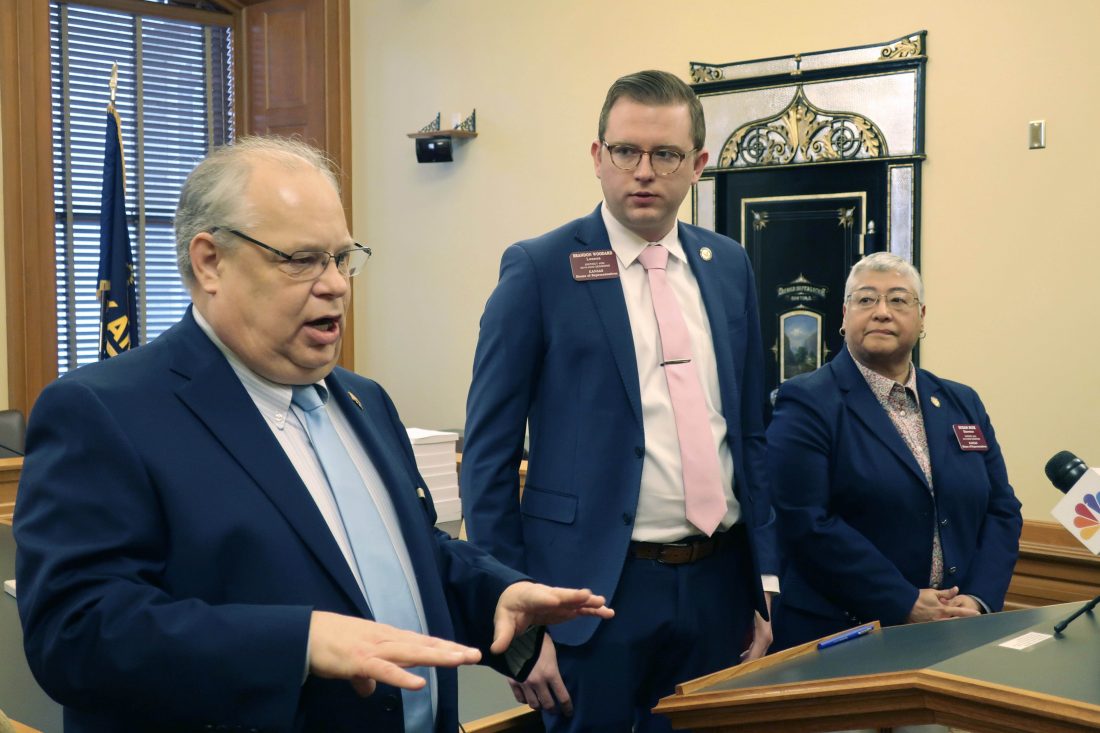