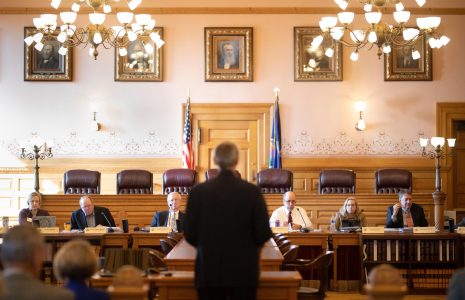 Members of the Governor's Council on Tax Reform listen as Lawrence resident Jack Nott addresses them during a public comment session on Thursday, Nov. 14, 2019, in the Old Supreme Court chambers of the Kansas Statehouse. Nott, who is retired and on a fixed income, implored the panel to refrain from raising taxes.

TOPEKA — Kansas’ sales tax on food was at the forefront of discussion Thursday during a meeting of Gov. Laura Kelly’s Council on Tax Reform.

At the meeting, the third time the council has convened thus far, 10 people spoke during a public comment period that lasted about an hour and a half. Four of the 10 mentioned Kansas’ sales tax on food.

Sales tax rates on food for neighboring states are 4.5% in Oklahoma, 1.225% in Missouri and 0% in Colorado and Nebraska.

Low-Smith also said that Kansas was one of just 14 states in the nation to charge a sales tax on food and one of seven that taxes groceries at the same rate as other items. Some city and county taxes on food can bring the total percentage up to 11% in some areas of Kansas, she said.

Low-Smith encountered pushback from council co-chair Janis Lee, who said she lived in the border town of Kensington, Kan., for 68 years and never went to nearby Nebraska for weekly grocery shopping, nor did her neighbors. She also questioned how the state’s budget would survive if the food tax was cut.

“When you take 400 million (dollars) out of the state’s budget, what are you going to cut?” she asked.

Low-Smith argued that the anticipated impact would be “far less” than $400 million, noting that the money people saved on groceries would likely be spent elsewhere in the local community.

“If you’ve been in the habit of spending $20 at the grocery store, you are still probably going to find a way to spend that same $20,” she said.

When Teresa Kelly got up to speak after Low-Smith, she was met with similar budgetary concerns.

John Wilson, president of Kansas Action for Children, told Teresa Kelly that roughly 50% of the state general fund goes to K-12 education, 13% goes to higher education, 10% goes to human services and a “little bit” goes to corrections and the Capitol.

“Where do we cut?” Wilson asked Teresa Kelly, who responded that she did not have an answer.

Two other speakers who addressed the sales tax on food were Therese Bangert and Lawrence resident Jack Nott.

Bangert spoke of the need for a tax policy that recognizes the vulnerable and suggested that the state return to offering a refundable food sales tax credit.

“I believe that our God has given an abundance,” said Bangert, a nun with Leavenworth Sisters of Charity, “and it is our task to see that the abundance serves everyone, especially the least of these.”

Nott, of Lawrence, suggested a reduction in the sales tax on food, also stating that the money saved would likely go back into the economy to support local businesses.

“As a senior citizen, I’m extremely concerned about the taxes that we pay for the right to live,” he said. 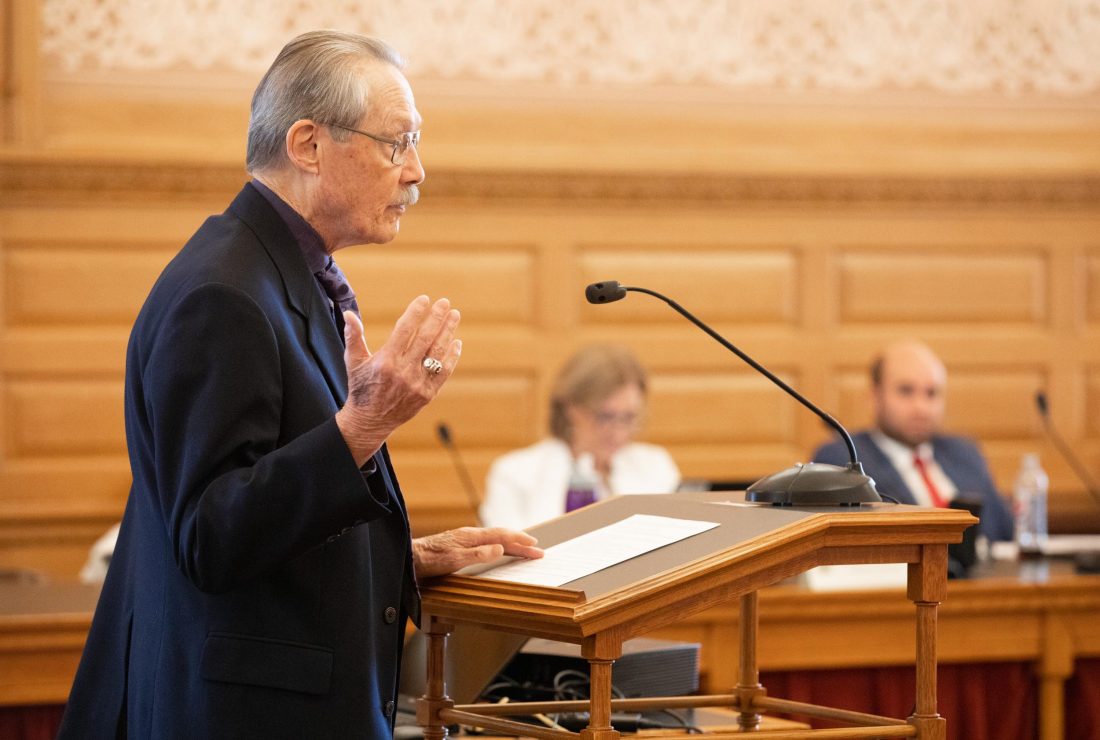 Lawrence resident Jack Nott addresses members of the Governor’s Council on Tax Reform during a public comment session on Thursday, Nov. 14, 2019 in the Old Supreme Court chambers of the Kansas Statehouse. Nott, who is retired and on a fixed income, implored the panel to refrain from raising taxes.

The Governor’s Council on Tax Reform was launched in September and was formed to pursue bipartisan reform of the Kansas tax code. The council is led by co-chairs Steve Morris, a Hugoton Republican, and Lee, a Kensington Democrat. After 18 months, the council will make specific statutory recommendations to state lawmakers.

Other speakers at the public forum included:

• Patrick Vogelsberg, representing the Kansas Association of Realtors. He recommended that the Legislature allow people to itemize deductions on their Kansas tax filings regardless of whether their federal returns allow itemized deductions.

• Mark Tallman, representing the Kansas Association of School Boards, who called for the investment of general tax dollars in education. Citing declines in national test scores, he noted that over the last decade “we have fallen behind, and we have seen indicators of education decline.”

• Peggy Kelly, representing Kansas Head Start, who recommended support for the child care industry. “Kansas business wins when workers can be stabilized (and) equipped,” she said.

• Eric Stafford, representing the Kansas Chamber of Commerce. He argued that business income earned in another country should not be subject to state taxes.

• Trey Cocking, representing the League of Kansas Municipalities. He voiced his opposition to tax lids and said the Legislature needed to make sure the online sales tax stayed in place.

• Vashti Winterburg, of Lawrence. She said she was mostly concerned with “equity” and suggested the sales tax be increased for the rich and decreased for the poor.