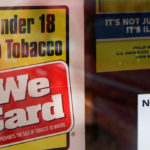 The discrepancy is the result of a disagreement between city and county officials, but it may become null if a current effort to pass Tobacco 21 legislation in Kansas succeeds. Several local legislators are offering various levels of support for the law change, but aren’t necessarily predicting it will pass in conservative Kansas.

“I’m supportive of it because I think anything that we can do to protect kids from getting addicted to tobacco when they’re young is critical,” state Rep. Eileen Horn, D-Lawrence, said.

Supporters say the age change is more necessary than ever as vaping becomes more popular with teenagers.

A group called The Tobacco Free Kansas Coalition is drafting a Tobacco 21 policy for the state, which would raise the tobacco purchasing age from 18 to 21. Currently, 29 cities and counties in the state have passed Tobacco 21 policies, American Lung Association Kansas advocacy specialist Sara Prem said. Nationally, 18 states and Washington, D.C., have passed statewide Tobacco 21 laws, according to the Tobacco 21 website.

“The current outbreak of pulmonary injuries is deeply concerning — especially as we see youth vaping skyrocketing and given the developing lungs and brains of youth are more at risk,” Prem said in an email to the Journal-World. “As we face this youth e-cigarette epidemic, action is critical. Strong Tobacco 21 legislation for Kansas will protect our kids from a lifetime of addiction as well as the death and disease associated with the use of tobacco products.”

The Tobacco Free Kansas Coalition describes itself as “a statewide alliance of health, medical, education, parent, youth, law enforcement, health coalitions and individuals advocating for laws, policies and funding of proven programs to significantly reduce tobacco use and addiction, especially among children and high-risk populations.”

The current legislation is being drafted by agencies including the American Lung Association, American Cancer Society Cancer Action Network, Tobacco Free Kids, Public Health Law Center and more. Prem said the policy is still being developed but that they hope to finish it in mid-November and introduce it during the 2020 legislative session.

Currently, Douglas County has passed an ordinance banning the sale of tobacco products to people under 21, but it only affects the county’s unincorporated areas. The Lawrence City Commission chose not to consider the ordinance in September, which angered a majority of the Lawrence school board. A couple of weeks later, Mayor Lisa Larsen did say she planned to bring the topic up again.

While municipalities have been “leading the way” by passing policies, Horn said that for consistency, she would rather see Kansas adopt a comprehensive statewide policy than have a “patchwork of municipal policies.”

Rep. Mike Amyx, D-Lawrence, was more hesitant on a stance, noting that he would like to find out what people in his district would like to see happen. Amyx said that as a former smoker, he does have concerns about health effects, especially new information related to the effects of vaping.

Amyx also noted that he would want to discuss the culpability of those selling tobacco products.

One concern some opponents of Tobacco 21 share is that people selling tobacco products, who are usually young themselves, could be punished for not following the age restrictions.

State Sen. Marci Francisco, D-Lawrence, said she would support Tobacco 21, but that she wasn’t sure it would pass.

“But I think we should always be reviewing (the statistics), you know, the impact,” she said, noting the state’s budget is still somewhat dependent on taxes charged on tobacco sales. “If we’re talking about changing our tax code, well, let’s try to get away from any dependency on tobacco, because we do actually hope it goes away. Or, we do hope that people think about their choices.”

Horn also said she wasn’t sure the law change would pass statewide.

“Oh, I don’t know about that,” she said. “That’s a crystal ball question.”