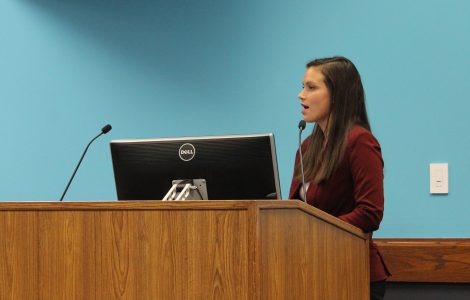 Sarah Hartsig, a health promotion specialist for the Lawrence-Douglas County Health Department, speaks to the Lawrence school board about the dangers of students using e-cigarettes on Monday, Sept. 9, 2019.

A majority of the Lawrence school board expressed frustration over the Lawrence City Commission choosing not to consider an ordinance that would ban local businesses from selling tobacco products to people under the age of 21.

The school board said during its meeting Monday that it plans to send another letter to the Lawrence City Commission calling for it to reconsider approving a Tobacco 21 ordinance, which would prohibit the sale of all tobacco products, including e-cigarettes and other devices that vaporize nicotine liquid, to people under 21.

City commissioners Matthew Herbert and Jennifer Ananda said at their July 16 meeting that they were not interested in taking up the issue.

The school board previously sent letters to the City of Lawrence and Douglas County supporting them to approve Tobacco 21 ordinances. While the Douglas County Commission approved the ordinance in September 2018, the Lawrence City Commission held off because of legal challenges that existed at the time.

But in June, the Kansas Supreme Court upheld the City of Topeka’s home rule authority to prohibit the sale of tobacco products to people under the age of 21. When the court made the ruling, Sarah Hartsig, a health promotion specialist for the Lawrence-Douglas County Health Department, told the Journal-World the ruling could lead other Kansas communities passing similar ordinances.

She said the ordinances are important preventative measures that could help decrease the amount of minors using tobacco or e-cigarette products.

However, in the months since the ruling, the Lawrence City Commission has not reconsidered it and Hartsig told the school board she does not believe it will any time soon.

Board member Kelly Jones said she plans to reach out to the candidates who are running in an election for the commission, which could help spur the issue again when a new commission takes over in January.

“This is very disappointing and I’ll be looking to talk to all the candidates running,” she said.

Board members Shannon Kimball and Rick Ingram both said they were disappointed in the commission’s decision as well.

The issue was brought back to the school board after hearing a report on Lawrence students’ use of e-cigarettes, also known as “vaping,” which the school district considers to be an epidemic.

E-cigarettes are a handheld devices that simulate smoking by producing vaporized liquid, which often includes nicotine, the addictive chemical in cigarettes. Although some people have used the device as a cigarette substitute to avoid their harmful toxins, the use of e-cigarettes poses its own health risks.

Hartsig reported to the board that as of 2017 one-third of Kansas high school students have reported trying e-cigarettes and one-tenth of Kansas students reported they “currently” use them.

Locally, Hartsig said Lawrence students have anecdotally reported to the health department that many more than that are using the nicotine products. Amy McAnarney, assistant principal at Free State High School, said 12 total incidents of high school students using e-cigarettes have been reported in the first three weeks of the school year.

The report also showed dangerous side effects of e-cigarette use, including the development of asthma and reduced lung function as well as experiencing cuts and burns to the body from the device exploding.

Recently, three people have reportedly died because of the use of e-cigarettes, which led to the Centers for Disease Control and Prevention on Friday calling on the end of their use, according to PBS News Hour. Additionally, as many as 450 people in 33 states have reported possible pulmonary disease after using e-cigarette devices, according to the report.