Cities in Kansas have the right to raise tobacco age to 21, Kansas Supreme Court rules 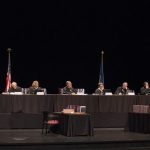 A Douglas County ordinance prohibiting businesses from selling tobacco products to people under the age of 21 appears to be safe from legal challenges.

The Kansas Supreme Court on Friday issued a ruling upholding the City of Topeka’s ordinance that prohibits the sale of tobacco products, including e-cigarettes, to anyone under the age of 21. The ruling overturns a previous Shawnee County District Court injunction.

In the case, Dwagfy’s Manufacturing Inc., doing business as The Vapebar Topeka and Puffs ‘n’ Stuff LLC, challenged the City of Topeka’s “Tobacco 21” ordinance. The company claimed that state lawmakers, not cities, have the authority to make such laws.

Shawnee County District Judge Franklin Theis agreed and issued a permanent injunction on the ordinance, barring its enforcement, in March 2018. The City of Topeka appealed the ruling and the Supreme Court heard arguments in the case during a special public session in Lawrence in April.

On Friday, the high court announced that it upheld the City of Topeka’s ordinance, citing the city’s home rule authority outlined in the Kansas Constitution.

“The ordinance prohibiting retailers from selling, furnishing, or distributing cigarettes, electronic cigarettes, tobacco products, or liquid nicotine to any person under 21 years old is a constitutional exercise of Topeka’s home rule power,” the court wrote in the ruling. “Because the ordinance is a constitutional exercise of the city’s home rule power, we reverse the district court’s permanent injunction.”

“I’m pleased with the Kansas Supreme Court’s decision,” Derusseau said in a statement emailed to the Journal-World. “I’m glad the resolution will remain in place and continue to help protect the health of our youth.”

The Douglas County Commission approved an ordinance in September 2018 that prohibits the sale of tobacco products to anyone under the age of 21 in the county’s unincorporated areas. It does not affect businesses within the limits of Douglas County cities.

Sarah Hartsig, a health promotion specialist for the Lawrence-Douglas County Health Department, said the Supreme Court’s ruling may help spread similar ordinances to the cities of Douglas County. She noted that the City of Lawrence considered a “Tobacco 21” ordinance but held off because the Topeka court case had not yet been resolved.

“It’s really exciting for us in public health because we can now pursue a similar ordinance in Lawrence as well as the other municipalities in Douglas County, Baldwin City and Eudora,” she said.

Additionally, the health department sees the ordinances as an important preventive measure to combat teenage use of tobacco and nicotine. Hartsig said the vast majority of lifelong smokers began using tobacco products before turning 21.

“We’re really trying to make sure young people don’t get hooked on nicotine early and they have the chance for their brain to mature and make better decisions when they’re older,” she said. “Nicotine is really harmful for teenagers because the part of their brain involved with decision making … is still developing and it’s especially susceptible to the effects of nicotine. Students who start using nicotine at earlier ages are more likely to be addicted to nicotine and other substances later in life.”

Commissioner Nancy Thellman said in September the commission explored the ordinance because of concerns at local organizations that have found e-cigarettes to be a problem for high school students.

On Sept. 12, representatives from LiveWell Douglas County, the Lawrence Boys & Girls Club, LMH Health and the Kansas chapter of the American Lung Association urged commissioners to raise to 21 the legal age to buy tobacco products, saying it would end the social chain of 18- through 20-year-old friends buying tobacco products for minors.

“(They showed) how addictive these products are and how dangerous that is to adults if they get addicted when they are young,” he said. “So the opportunity to improve health outcomes for people in Douglas County, and hopefully beyond, is an area where Kansas counties and cities are getting out in front.”

“If that’s where we end up, I think we’re on the right side,” he said at the time.