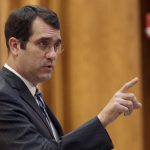 Kansas Attorney General Derek Schmidt makes his case during oral arguments in a court of appeals nomination disagreement Thursday, May 9, 2019, in Topeka, Kan. The case was brought by the State of Kansas to solve a dispute between Gov. Laura Kelly and the Kansas Senate over an appeals court nomination. (AP Photo/Charlie Riedel)

WICHITA — Kansas’s top prosecutor is threatening to go to court if Democratic Gov. Laura Kelly doesn’t drop a policy that allows some adults without children to receive welfare even if they don’t meet work requirements.

Republican Attorney General Derek Schmidt has given Kelly a Friday deadline to act on the policy, which was put in place after unsuccessful attempts by Democrats to make changes through the legislative process, The Wichita Eagle reports .

Kelly has stood by the policy and her office plans a news conference Thursday to address the issue. She has long been critical of the state’s restrictions on welfare, which lawmakers placed into law under former Republican Gov. Sam Brownback.

Schmidt wrote that Kelly and DCF Secretary Laura Howard are both free to advocate changes to the state’s welfare law, Schmidt said. “But,” he added, “unless and until changed, we must give effect to the law that currently is on the books.”

Under federal law, able-bodied adults without children can’t receive food assistance for more than three months every three years if they don’t work at least 20 hours a week. However, the U.S. government provides exemptions that states can use to waive the work requirements for some recipients. On May 17, the Department for Children and Families directed employees to allow people who haven’t followed the work requirements to receive more than three months of assistance. The agency plans to use 58,000 exemptions the state has accumulated.

DCF said in a previous statement that the exemption would benefit youth aging out of foster care and homeless individuals. It noted that the program is 100%federally funded.

Over the past few years, Kansas reduced the number of months someone can be in the Temporary Assistance for Needy Families program to 24 months from 36 months. The lifetime limit for the program was cut to three years from four.

Supporters of the restrictions said they prompted people to seek jobs but critics said the changes just kicked people off assistance.