‘Consider doing it now’: Ahead of 2020 session, Rep. Eileen Horn takes a hike with her boys in her beloved Kansas 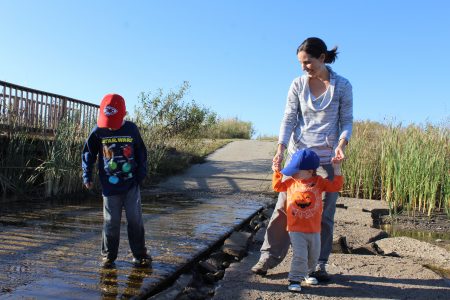 Rep. Eileen Horn with her children, Leo, left, and Bowie, explore the Baker Wetlands on Oct. 8, 2019.

From atop a rock, 4-year-old Leo looked to his mom and asked permission to leap. Rep. Eileen Horn told him to go for it.

“That didn’t even hurt!” he exclaimed after.

Horn became interested in politics from “these two, actually,” she noted, nodding toward her children as they played near the entrance to the Baker Wetlands in early October.

The House District 10 Democrat grew up in Kansas, but left the state for college and spent 10 years away “in places where Kansas was kind of mocked,” she said. “I got really tired of people commenting about ‘Kansas is a flyover state’ and ‘So glad you’re out of there, right?'”

Horn, 39, thinks it’s important to invest in one’s home, so now she’s back in Kansas, where she has been serving as a state representative since 2017. She was sworn in while pregnant with her other son, Bowie, now 2 years old.

“I want them to be proud of being from Kansas, and I want it to be the kind of place where they can find opportunities to make a contribution and a living and also whoever they want to grow up and love, they feel safe doing that,” Horn said. “I feel like Kansas hasn’t always been that kind of place.”

Horn wants to change that, so when her children want to leap, they’ll have something stable on which to land. 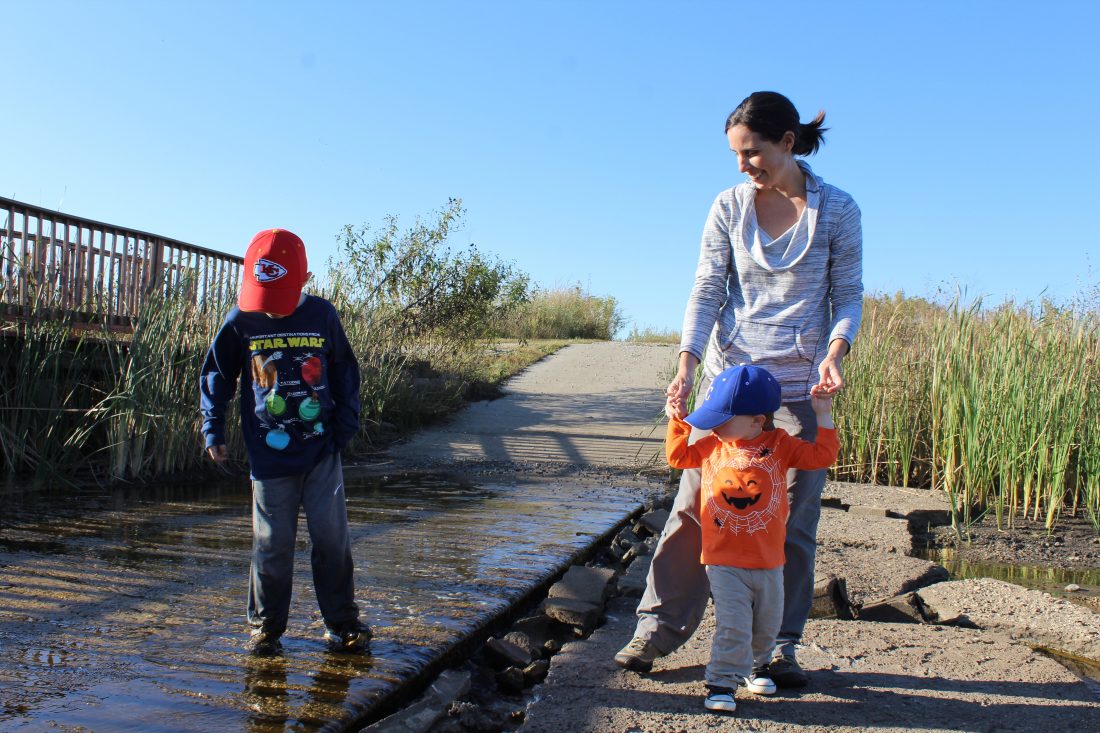 Rep. Eileen Horn with her children, Leo, left, and Bowie, explore the Baker Wetlands on Oct. 8, 2019.

Horn previously served as the sustainability director for the City of Lawrence and Douglas County. She left that job after joining the Legislature, but still does consulting and grant writing in the field of sustainability, a flexible profession that lets her do drop-off in the morning at school, work on legislative issues and consulting during the day, and take the occasional hike with her family on the weekends.

“This is one of our favorite spots,” Horn said of the Baker Wetlands. “My husband’s a birder. I love wildflowers, and it’s not challenging hiking for a 2- and a 4-year-old.”

Despite that, the trio had to overcome a few obstacles that day. Bowie took a tumble and bloodied his mouth. But he decided he could continue with the hike. Later, a beloved bouncy ball was lost in the tall grass, much to Leo’s despair. 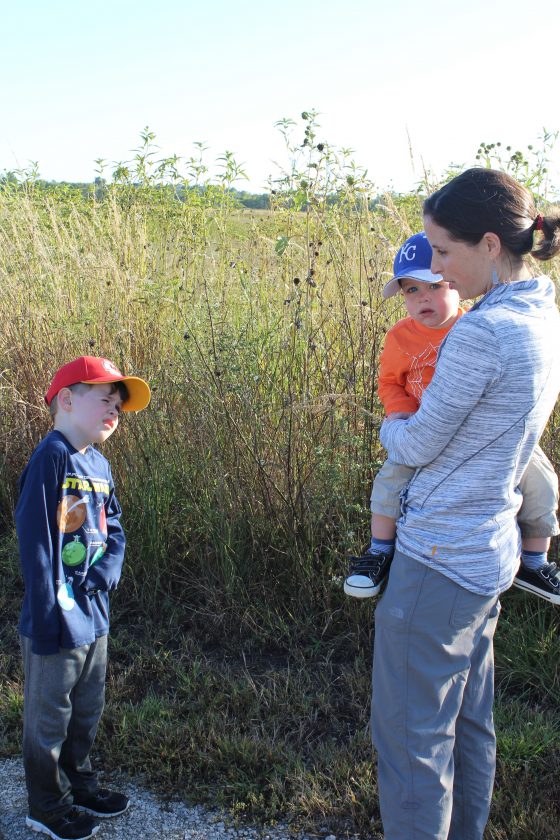 Rep. Eileen Horn talks to her son Leo, left, about a bouncy ball that had been lost in the tall grass of the Baker Wetlands during their family hike on Oct. 8, 2019. Horn holds her other son, Bowie.

Horn was just happy to get them outside and interacting with nature.

Horn is passionate about the environment. She said that in her first two terms in the Legislature she had to learn about Medicaid policy and K-12 education. This session, she hopes to prioritize sustainability initiatives.

“I’m really excited about working on state policy for energy efficiency,” she said.

Horn hopes to collaborate with the governor’s office this upcoming session on an energy vision for the state. In early October, Gov. Laura Kelly announced a new statewide energy plan.

According to the American Council for an Energy-Efficient Economy, Kansas ranks 46th out of the states in energy efficiency. The ranking is based on states’ energy efficiency policies and program efforts.

Horn hopes Kansas will pass legislation that would allow cities and counties to work with a program called PACE: Property Assessed Clean Energy. According to the U.S. Department of Energy, the program allows private property owners who want to finance energy efficient or renewable energy improvements to implement them without a large up-front payment. Property owners instead typically repay their improvement costs in 10 to 20 years. A PACE assessment is a debt of property: The debt is tied to the property as opposed to the property owner, so the repayment obligation transfers with property ownership, if the buyer agrees to assume it.

Horn said the program was a way to incentivize people to improve their properties and add energy improvements without paying for it all upfront. Missouri enabled PACE legislation in 2010.

Horn also said she thought a grocery cooperative model might be a good solution for healthy food access in rural Kansas. She serves on the rural revitalization and agriculture committees.

For the general priorities of the state, Horn agreed with Lawrence Reps. Mike Amyx and Dennis “Boog” Highberger, stating that Medicaid expansion and the constitutional amendment on abortion would be important topics. A group called Kansans for Life is proposing an amendment to the state constitution, after the Kansas Supreme Court ruled in April that the state constitution protected a woman’s right to abortion.

Horn also said she thought the state needed to continue filling back in the financial cuts that higher education has taken and working on the state’s foster care system. In past years, the state faced major issues such as overburdened social care workers, unaccounted-for foster kids and foster kids spending the night in offices instead of in homes or other placements.

Horn is proud of working to get a lactation room in the Statehouse and being a mother while serving her state. Horn is also a stepmom to Miles Martin, the 17-year-old son of her husband.

“I feel really good about that swearing-in picture,” Horn said of a photo of her taking her oath of office, seven months pregnant with then 2-year-old Leo hugging her from behind and her husband, Rick Martin, standing next to them.

“You know, it’s a common thing us women do, is we say, ‘Oh, I’ll wait until my kids are older.’ And I think what I’m trying to show is, ‘Well, maybe you should consider doing it now,'” Horn said. “It feels really good to be a young woman in the Legislature.” 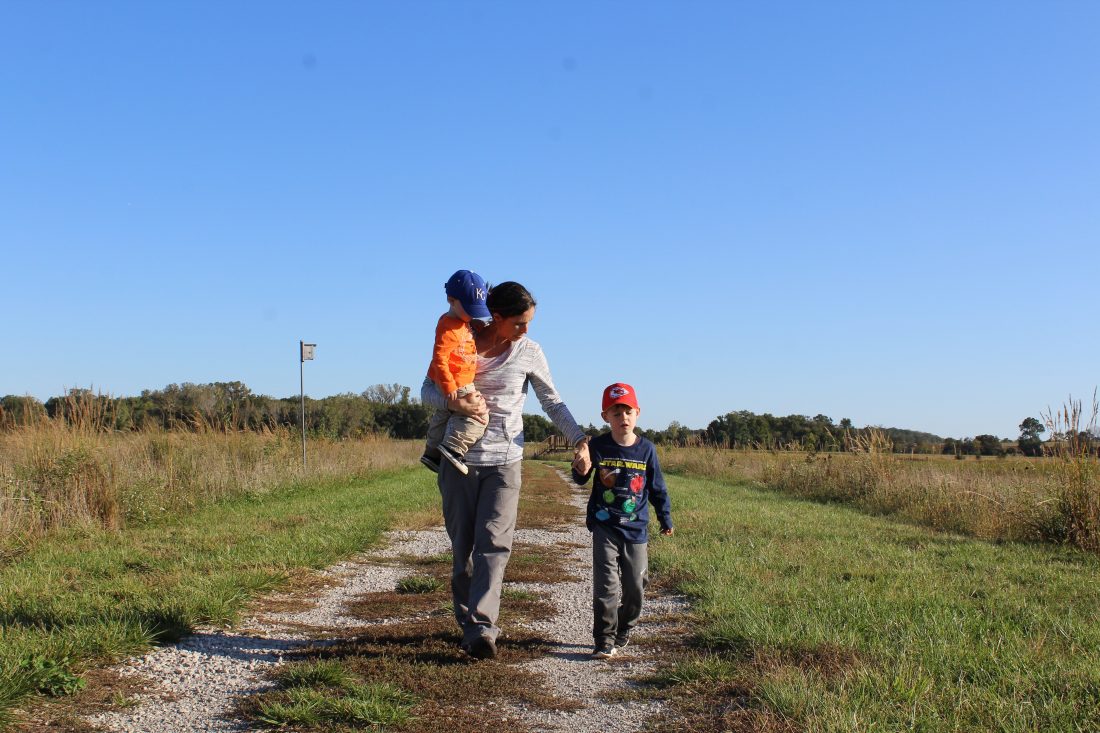 Rep. Eileen Horn and her children, Bowie, left, and Leo, explore the Baker Wetlands on Oct. 8, 2019.