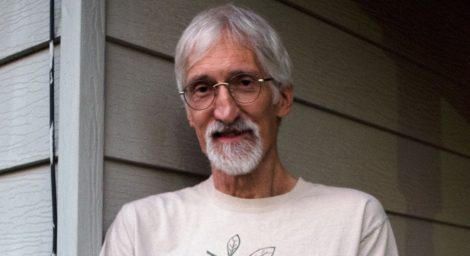 District 46 Representative Dennis "Boog" Highberger is pictured at his home on Saturday, Oct. 5, 2019.

Dennis “Boog” Highberger was sitting in his Lawrence dining room, West African music playing in the background and dozens of “Last Supper” portrayals hanging on the walls around him, when someone knocked on the door.

“That might be the first pawpaw person,” the Democratic state representative said.

The music, the artwork, the nonchalant mention of an unusual fruit — and it was only the beginning of Highberger’s Saturday night.

It was Oct. 5, the day Highberger hosted his annual pawpaw festival. Every year, he and his friends put together a night of pawpaw-inspired dishes and drinks, featuring items such as rice pudding, cheesecake, fruit salad and daiquiris. 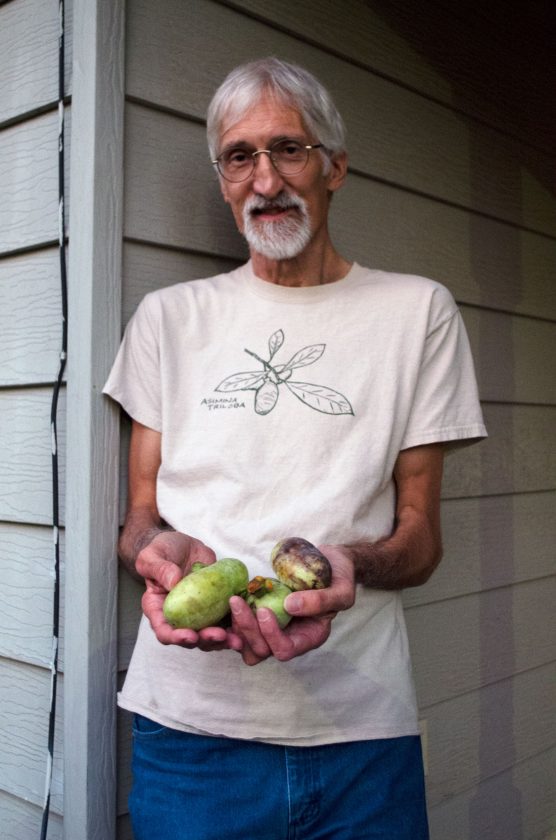 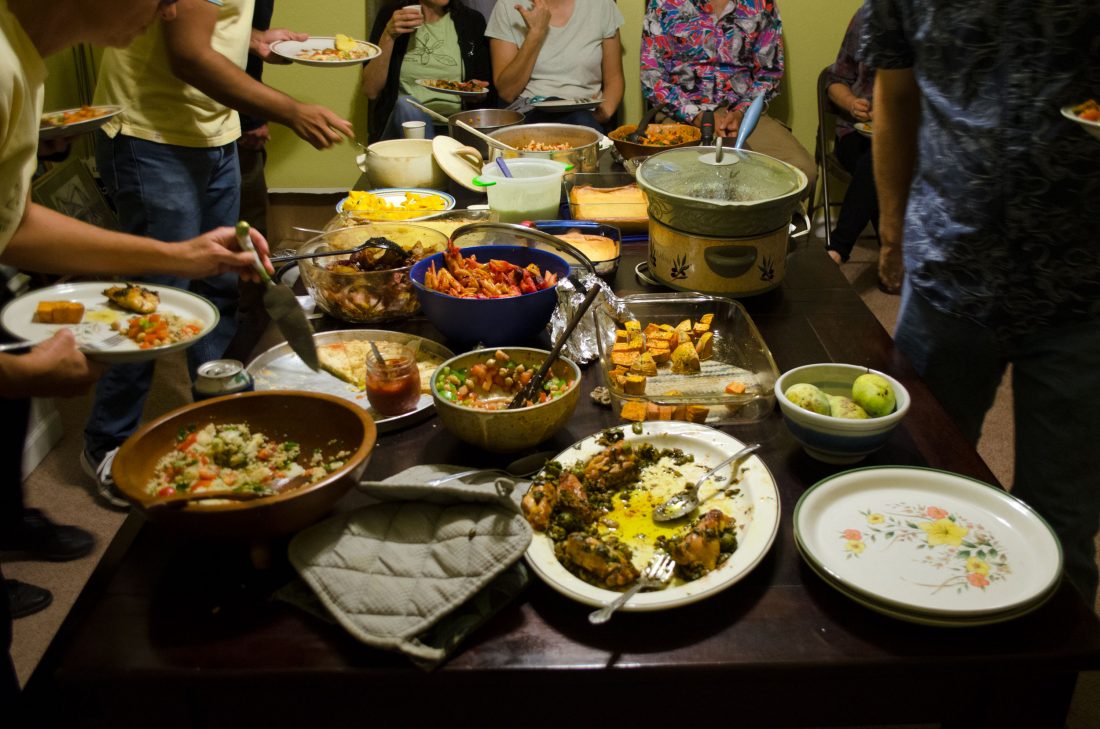 Dishes that incorporate pawpaw are served potluck style at the 24th annual Lawrence Pawpaw Festival – which was hosted at the home of District 46 Representative Dennis “Boog” Highberger – on Saturday, October 5, 2019.

“I’m just the host; my friend Eric is the disease,” Highberger said of co-organizer Eric Farnsworth, who Highberger said is “leading a revival” of the fruit. It was the duo’s 24th festival.

“It looks sort of like a lumpy green potato. The inside is like banana custard. It’s just one of the most unexpected things,” said Highberger, 60, who was wearing a T-shirt with the fruit’s scientific name, Asimina triloba, on it. 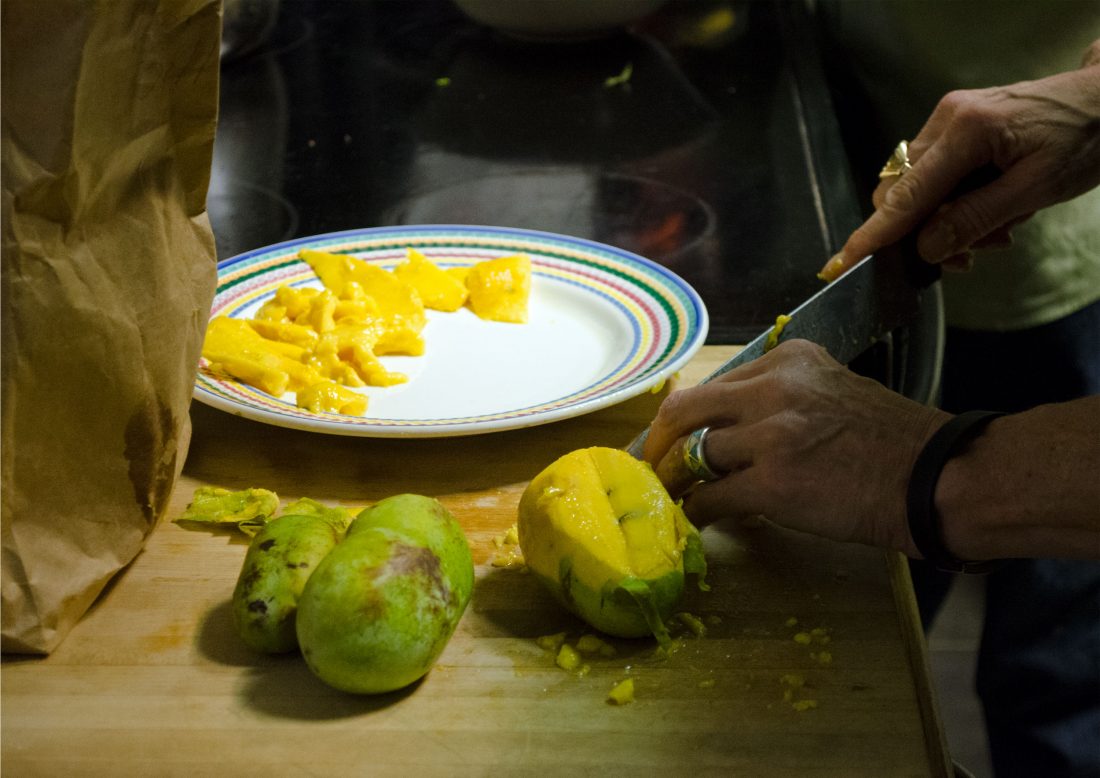 Allison Godchaux, of Bonner Springs, cuts a pawpaw at the 24th annual Lawrence Pawpaw Festival on Saturday, October 5, 2019. The festival was hosted at the home of District 46 Representative Dennis “Boog” Highberger.

Before the party, Highberger sat down at his dining room table, which would later be covered with creative variations of the fruit, to talk policy and his political history.

Highberger’s political career began with his “accidental” election as student body vice president at the University of Kansas. (He and his running mate didn’t expect to win, he said.) Post-college and post-law school, he was elected to the Lawrence City Commission in 2003, where he served for six years. In 2014, he was elected to the Kansas House of Representatives, serving District 46.

This upcoming session, Highberger expects the major issues to include Medicaid expansion and criminal justice reform, as well as a proposed amendment to the Kansas Constitution to prohibit abortion, which he believes won’t pass.

Regarding Medicaid expansion, Highberger said he expected that as long as the House and Senate both had the opportunity to vote on it, it would pass.

“The problem in previous years has been that leadership won’t allow the vote,” he said, noting that Senate leaders appear to be committed to allowing a vote this upcoming session.

Criminal justice reform is a topic that means a lot to Highberger. He sits on the joint legislative committee on Corrections and Juvenile Justice Oversight.

Highberger said he hoped the Legislature would be able to take aggressive action on criminal justice reform. Currently, 120 Kansas inmates are housed in a private prison in Arizona and about 90 are housed in contract beds in county jails because Kansas’ prison system is over capacity. Projections show that Kansas will be 1,000 over capacity by 2029 if nothing changes, requiring the construction of a $150 million to $200 million prison facility, Highberger said.

“I think that there is bipartisan agreement that that shouldn’t happen,” he said.

Highberger, who is a member of the Kansas Sentencing Commission, said there would be a number of proposals coming from his commission and others that would include plans for eliminating the state drug offender registry, lowering sentences for low-level drug crimes and allowing probation periods to be shortened when probationers are in compliance with probation conditions for an extended period.

“If enough of these proposals are passed, we should be able to bring the Arizona and county prisoners home by the end of the year,” Highberger said. “The long-term goal is to reduce our overall incarceration rate and keep prisoners in facilities where they can access programs that will help reduce recidivism.”

Highberger also expressed excitement about a bill he hopes to present that would create a college savings account at birth for every child in Kansas. He said that the program would need $2 million a year to fund the initial contribution for low-income students. For this bill to move forward, Highberger said the Legislature and Gov. Laura Kelly would need to be convinced that this money should come out of Temporary Assistance for Needy Families (TANF) funding, or another funding source would be necessary.

When asked what he was most proud of accomplishing during his time as a representative, Highberger said there wasn’t a lot, given the Republican majorities in the Statehouse.

“As a Democrat in a Kansas House, it’s really hard to get much done,” he said, calling it frustrating.

“When I was on the City Commission, I could actually get things done, and then people got mad at me more often too,” he said, noting that he gets more positive feedback now that he’s a representative, “even though I can’t accomplish as much.”

Highberger said he planned to run for reelection in 2020 and 2022. After that he’ll likely retire.

“I think this job does a good job of limiting itself pretty well,” he said.

Why? “Well, the pay is poor. It’s stressful. And people lose elections too.”

Nevertheless, last session Highberger was proud of helping to raise the protected income level for people on the home and community-based services (HCBS) waiver. It’s a Medicaid program that allows people to live at home instead of going to a nursing home, Highberger said, but it caps how much income one can keep. The income cap was raised from $747 a month to $1,177.

Highberger said he thought some of his biggest strengths were listening to people’s concerns and articulating them well to the legislature.

At his pawpaw party later that night, there weren’t many concerns. The diverse crowd, many meeting for the first time, chatted around the dining room table. It was jam-packed with treats and savory dishes inspired by the “unexpected” fruit, a yearly staple in the Highberger residence.