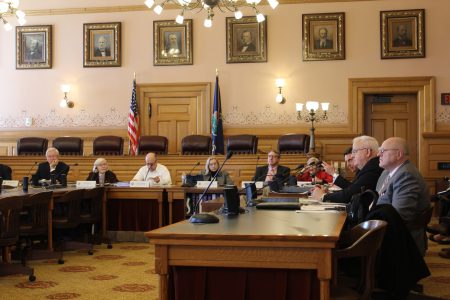 Council members vote on which proposals to submit to Gov. Laura Kelly for consideration in advance of the 2020 legislative session at a meeting of the Governor's Council on Tax Reform, Dec 3, 2019.

Low-income and disabled Kansans may be able to get refunds on their sales taxes from grocery purchases if Gov. Laura Kelly implements the recommendations of her Council on Tax Reform.

Members of the council determined on Tuesday what their suggestions to Kelly would be in advance of the 2020 legislative session.

John Wilson, president of Kansas Action for Children, drafted the motion on the Food Sales Income Tax Credit, which the committee unanimously approved.

Wilson said the refund program would “benefit hundreds of thousands of Kansans and help offset state and local sales taxes paid on groceries.”

He continued: “The council notes that targeting this relief to low- and moderate-income taxpayers would be a more effective way of providing relief than lowering the rate a penny or two on all purchases.”

The credit would be refundable, have income limits based on federal adjusted gross income and be limited to taxpayers who were Kansas residents for the entire tax year. It is estimated that more than 400,000 Kansans would qualify for credit, according to a news release from Kelly’s office.

At the last council meeting, the public comment period was dominated by speakers addressing Kansas’ high sales tax on food. Kansas’ 6.5% sales tax rate is higher than its neighboring states. Kansas is one of 14 states in the nation to charge a sales tax on food.

Two other proposals which the committee unanimously carried were presented earlier in the meeting by Michael Hale, an attorney with the Kansas Department of Revenue.

Hale proposed that Kansans should pay sales tax on digital products and subscription services, such as digital books, digital photographs, newspapers, mobile applications and video games. Of the 45 states that have a sales tax, 29 include the sale of digital products. Hale estimated this tax would produce about $30 million in revenue annually for Kansas. 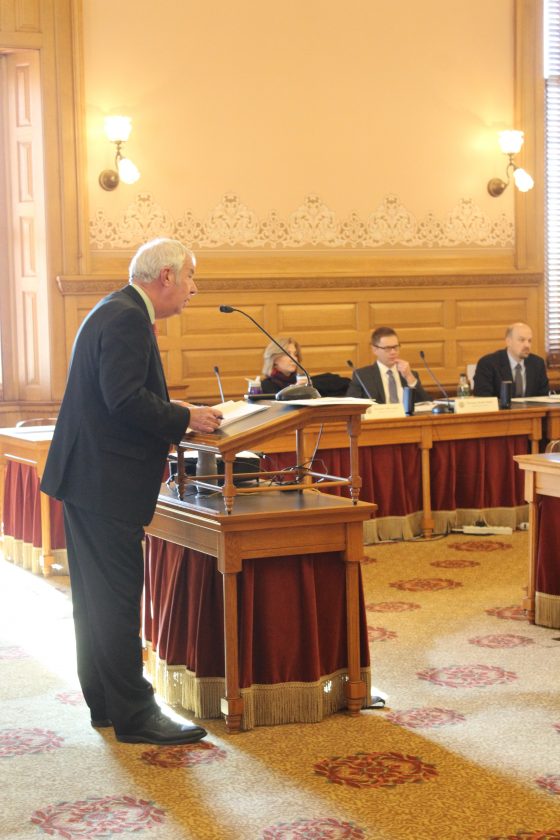 Michael Hale, an attorney with the Kansas Department of Revenue, discusses two proposals at the Dec. 3, 2019, meeting of the Governor’s Council on Tax Reform that the council later agreed to suggest to Gov. Laura Kelly.

Hale specified that local taxes would be included within Kansas’ marketplace facilitator legislation.

Council co-chair Janis Lee expressed her support of these proposals, calling them a “fairness issue.”

Hale said that small businesses have been hurt by Kansas’ outdated policies.

“Both of these bills are designed to level the playing field and make a more equal distribution of the taxes,” he said.

Other recommendations the council will make to the governor:

• Susan Sherman of the Kansas League of Municipalities proposed that the 2020 Legislature restore all or a portion of the Local Ad Valorem Tax Relief Fund, which aims to help municipal governments lower local property taxes.

• Former state Sen. Audrey Langworthy proposed that localities should be exempted from the property tax “lid” for transportation spending. The tax lid, which went into effect with a 2017 state law, generally caps how much of an increase in property tax revenue cities and counties can levy each year at the rate of inflation unless they hold an election and get voter approval. Currently, exemptions are primarily for law enforcement or other public safety functions, or to pay the cost of complying with state or federal mandates.

• Larry Weians, vice president of finance for Sprint, proposed that the council should, in the future, compare Kansas tax policy to those of other states.

• Duane Goossen, Kelly’s former acting secretary of administration, proposed that the council urge the governor and Legislature to be cautious toward any proposals that diminish revenue until Kansas more fully regains financial health.