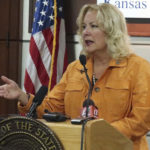 Attorney General Derek Schmidt on Tuesday appointed Gina Meier-Hummel to the job, which was created after recommendations from a task force.

Meier-Hummel was secretary of the Kansas Department of Children and Families under former Gov. Jeff Colyer. Previously, she was executive director of The Shelter, a nonprofit focused on intervention with at-risk youth.

The appointment takes effect immediately. Meier-Hummel will be coordinator on a part-time basis because of her work as executive director of the O’Connell Youth Ranch in Douglas County.

The Youth Suicide Prevention Task Force was created in June 2018 to survey efforts in the state to reduce youth suicide. The Legislature adopted several of the task force’s recommendations in May.