Brownback changed the way Court of Appeals judges are selected; Gov.-elect Kelly will use merit-based system instead 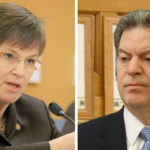 TOPEKA – Gov.-elect Laura Kelly will have the opportunity to appoint a new judge to the Kansas Court of Appeals as soon as she comes into office.

But the incoming Democrat says she does not plan to use the new system of selecting appellate court judges that former Republican Gov. Sam Brownback pushed through; that system allows the governor to make appointments directly, subject to Senate confirmation.

Instead, Kelly says she will use a process akin to the old way of choosing judges by filtering applications through a nonpartisan nominating committee that will forward to her a list of three candidates from which to choose.

“In an effort to increase transparency, we will use a merit-based selection process similar to that used by the Kansas Supreme Court,” Kelly said in a statement Wednesday. “This is not required, but I believe the people of Kansas deserve to observe this process and know that we are choosing a highly-qualified person to serve in this important judicial position. I am committed to being open and transparent.”

The opening on the court is being created by the upcoming retirement of Judge Patrick D. McAnany, who reached the mandatory retirement age of 75 earlier this month.

McAnany was first appointed to the Johnson County District Court in 1995 by then-Gov. Bill Graves, a Republican, and was later elevated to the Kansas Court of Appeals in 2004 by then-Gov. Kathleen Sebelius, a Democrat.

Under state law, McAnany is allowed to finish out the remainder of his term, which expires Jan. 14, 2019, the same day that Kelly and other statewide elected officers take office.

Kelly’s transition office said the selection process would begin even before she takes office. The transition office will accept applications until noon on Dec. 28. The names of all applicants will be made public Dec. 31.

From there, a committee of attorneys and others will review applications and select those who meet the statutory requirements for an appellate court judge. That is, they must be licensed to practice law in Kansas and they have been practicing either as a lawyer, judge or as a full-time teacher at an accredited law school for at least 10 years.

The committee will begin conducting public interviews sometime after Kelly’s inauguration. It will then forward the names of three candidates to the governor’s office, and Kelly will announce the appointment no later than March 15, which is 60 days after McAnany’s retirement takes effect.

Under current law, however, that appointment will still be subject to Senate confirmation.

In 2013, Brownback and other conservative lawmakers pushed through a change in law that did away with the merit-based selection process for Court of Appeals judges and allowed the governor to appoint whomever he or she chose, subject to Senate confirmation.

The first Court of Appeals judge appointed under that process, just months after the new law took effect, was Caleb Stegall, who was Brownback’s chief counsel at the time. He was later elevated to a seat on the Kansas Supreme Court.

Critics of the previous system argued that the nominating commission was dominated by lawyers who were all selected by other lawyers. They also were critical of many of the decisions handed down by Kansas appellate courts.

Their efforts to push through a similar change for selecting Kansas Supreme Court justices were unsuccessful, though, because that requires a constitutional amendment.

But supporters of the merit-based selection process argued that it helped keep the judicial branch of government independent by ensuring that judges were appointed on the basis of merit rather than political loyalties.