Group of paraeducators seeks to unionize, asks Lawrence school board for recognition 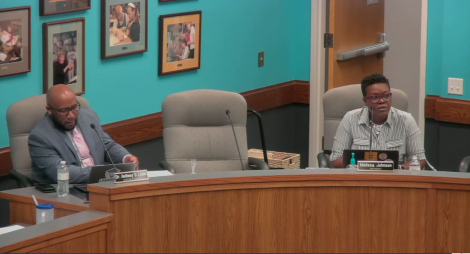 A group of paraeducators in the Lawrence school district is seeking to unionize, and on Monday night it asked the school board for recognition.

Members of the Paraeducators Association of Lawrence organizing committee made their request during the public comment portion of the school board’s meeting. The board also received many letters of support for the paraeducators, Board President Melissa Johnson said.

“Having a community of paras is irreplaceable and it would mean a lot to us if you could be able to recognize us and recognize our union,” said Tatyana Younger, a paraeducator and member of the group’s organizing committee.

Paraeducators, also known as paras, are classroom teaching assistants who do not have a teaching license but provide additional support to students. Through a union, the paraeducators would be able to collectively bargain with the district’s administration for improved compensation and benefits, among other things.

The group asked the board to “opt in” to Kansas’ Public Employer-Employee Relations Act, or PEERA. Hannah Allison, chair of the group, did not respond to the Journal-World’s call for further details. The group is working with the Communications Workers of America, a large labor union.

The school board did not take immediate action on the paraeducators’ request. Despite one organizer specifically asking the board to recognize the paraeducators as a union in two weeks, Johnson said a vote on the matter won’t occur until after the board meets with representatives of the proposed union in a public work session. She said that session would likely occur next month.

In the meantime, board Vice President Kelly Jones credited the paraeducators for their work and thanked them for organizing.

“We look forward to working with you and hearing more about how we can better support paras in the district,” Jones said.

The effort to unionize comes after Lawrence parents in the fall asked the board to consider increasing pay for paraeducators to address a shortage of workers in those positions. During the 2019-2020 school year, paraeducators were paid $10.74 per hour, according to job listings on the school district’s website at the time. That’s less than what was considered a living wage in Douglas County at the time, $11.18, the Journal-World previously reported.

In light of the parents’ requests, board members told the Journal-World at the time that increasing compensation for the school district’s paraeducators was a goal of theirs.

In other business, the board heard a report on the district’s behavioral health services.

Mental health facilitator Jose Cornejo said the district saw a decrease in the need for suicide prevention interventions this past school year, which he credited to mental health programming in schools.

“But we know we still have work to do,” Cornejo said. “The good thing is that we know kids know where those resources are in our buildings. We still want to continue to build on that.”

The board also approved several technology purchases worth about $181,000 with funds it received from the federal government’s Coronavirus Aid, Relief, and Economic Security Act, also known as CARES. The school district received about $1.4 million through the funding package and has a little more than two years to spend the funding, according to a memo to the board.