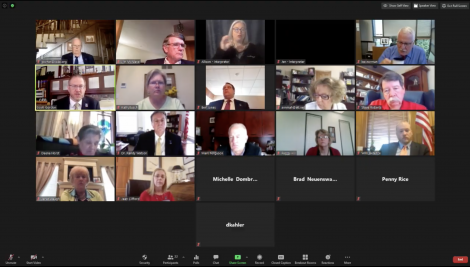 photo by: Screenshot via Zoom

Members of the Kansas State Board of Education meet virtually on July 22, 2020.

The 10-member Kansas State Board of Education on Wednesday failed to approve an executive order from Gov. Laura Kelly that would delay a reopening of public schools in the state three weeks to give local school districts more time to prepare for safely reopening amid the COVID-19 pandemic.

Barring further action from Kelly’s office, the decision on whether and when a school district can reopen for in-person instruction in the fall semester will now be left to those districts. Appearing at a virtual meeting Wednesday, conducted that way in the interest of safety because of the pandemic, the board split evenly on the order, with five members voting to approve it and five voting to reject it.

The tie meant the order failed since it didn’t gain a majority for approval.

Additionally, Superintendent Anthony Lewis said in a tweet on Wednesday that the school district is preparing a proposal to begin its school year after Labor Day.

“There is no higher priority for us than the health and well-being of our staff, scholars, and school families,” Lewis said in the tweet. “Our team has been working on calendar options since our July 13 board meeting at the direction of our school board. We will continue to work closely with our local health officials as they monitor health issues in our county impacting our staff and scholars,” he added in a following tweet.

The state board vote does not affect a separate order that Kelly issued and signed Monday that requires students, staff and teachers to wear masks and use hand sanitizer at least hourly. Those policies will still be in effect whenever a school district determines it can reopen.

The board members who voted against the order at hand, all elected Republicans, gave statements decrying how delaying school reopenings took away control from local officials and forced the board into a binary choice.

Will Lawrence, Kelly’s chief of staff, appeared at the meeting and told board members before they voted that the reasoning behind Kelly’s order wasn’t to take away local control but instead to give school districts more time to prepare for a safe reopening that was in line with guidance the board approved last week.

Dr. Lee Norman, secretary of the Kansas Department of Health and Environment, also appeared at the meeting and said that it was in line with best public health practices to support Kelly’s order, which would give the state more time to flatten the curve of new COVID-19 cases.

The curve in Kansas has spiked exponentially in recent weeks, and the state on Wednesday confirmed 771 new cases of the potentially deadly respiratory virus, which has claimed the lives of 309 Kansans.

“Schools can’t be safe islands in an unsafe community,” Norman told board members.

He also pointed out that children are not immune to the virus, as some have tried to claim, and that once a child reaches the age of 10, the child can effectively spread COVID-19 to adults who may be in more danger of the virus’ more problematic symptoms.

Ann Mah, D-Topeka, represents the fourth district on the board, which includes the Douglas County area. Initially, Mah said, she was a no vote because she, like her counterparts, wanted local districts to be able to have control and flexibility.

After hearing from many constituents, including students, teachers and parents, Mah said she changed her mind — and ultimately voted to support Kelly’s order.

“I want to be on the right side of history on this one,” she said. “I want to be able to say that when I had the chance to save children’s lives, I voted yes.”

In a statement released less than an hour after the board’s vote, Kelly asked every school district to delay the start of school. She did not address whether she planned to issue a similar executive order, which would also be subject to the board’s approval.

“The cases of COVID-19 in Kansas are at an all-time high and continue to rise. Our decisions must be informed by public health experts not politics,” Kelly said. “This vote puts our students, faculty, their families and our economy at risk.”

Here’s how all 10 members of the Board of Education voted: