District must ‘do a better job’ with police in Lawrence schools, superintendent says 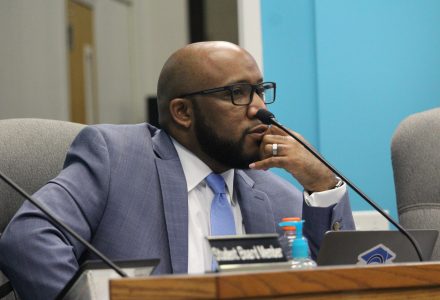 Lawrence Superintendent Anthony Lewis speaks to the school board about the school resource officer program during the board's meeting on Monday, Jan. 27, 2020.

When it comes to school resource officers in Lawrence schools, Superintendent Anthony Lewis said he will not tolerate any racial profiling of students.

But the school district may need to take steps to make sure that doesn’t happen, he said Monday at the school board’s meeting. Those steps may include helping students build relationships with the police officers and making sure students, faculty and staff understand the officers’ purpose in schools.

“There are things we have to do and will do a better job of,” Lewis said.

Lewis’ comments came after some school board members questioned the effect the police program has on marginalized students, specifically students of color, when discussing school district research related to the program.

According to the research, a majority of students who were surveyed said they felt safer with an SRO in their school buildings. But some of the board members suggested that the reported data is incomplete because it did not show the racial breakdown of the responses.

Lewis said the report was meant to provide the school board with at least some information about the program in case the City of Lawrence again asks the school district to provide some funding for the program.

If the school board does end up providing funding, board President Melissa Johnson and Vice President Kelly Jones said the school district may need to work out a way for it to have a say about who the police department hires to serve as an SRO.

“I’m not anti-SRO, but it’s about doing it the right way and having the conversations (some) don’t want to have,” Johnson said, referring to discussing racial disparities in police contact with students.

The school district began researching the program as a response to a heated discussion some of the board members had with city officials last summer.

In July, city officials proposed that the school district begin contributing funding for the program. Some school board members said the request was unfair because the school district was facing a tight budget and it did not have the taxing authority to raise revenue to pay for the program. City officials at the time noted that they too were under budget pressure and similar funding splits were in place in nearby communities.

The school resource officer program currently uses four officers. Two officers are stationed at each high school in Lawrence, and each officer also spends some time at the district’s middle schools.

In other business Monday, the board authorized four new courses to be included in the 2020-2021 high school curriculum. The additions include two Spanish language courses, an advanced physical fitness and weight training course and a biology course and lab.

Jennifer Bessolo, director of curriculum, said the biology course and lab and one of the Spanish language courses will be part of the school district’s Jayhawk Blueprint program, which allows students to earn college credit through the University of Kansas concurrently with their high school credit.