After a gun incident was reported at Lawrence High School last week — the third in the past 12 months — students voiced their concerns during a round-table discussion on Thursday.

One worry that the dozen or so students shared: that guns at school are becoming more routine.

“It pissed me off to say that it’s normal,” LHS junior Sophia Bracker Sturm said. “It’s something I see all the time now.”

On Jan. 8, a student reportedly brought a loaded handgun to LHS. The incident was the latest in a series of recent gun incidents at local schools. Since April 2018, the Lawrence school district has had six confirmed incidents of students bringing guns to schools or exchanging them on school grounds, according to past Journal-World reports.

On Thursday at LHS, in front of an audience of about 50 parents and community members, the students shared their ideas for how to keep that number from rising.

Several students said they believed more could be done by faculty and staff to check in with students to understand their personal situations. They also noted that in the recent incident, the student reportedly claimed to have brought the gun to school for self-defense.

A tweet by the school district on Jan. 9 said the student “obtained the gun from a family member’s home & indicated it was carried for protection from persons outside of school.”

Bryce Smith, a senior, said the school may need to consider more ways to build relationships with students so they can be aware of situations like this and find ways to help.

“That’s something that is lacking in our school,” Smith said.

One student suggested that a mental health team on the school’s staff could regularly meet with all students to build those relationships. That way, students who are not highly involved in school activities would still get the opportunity to speak to staff about their situations.

Another student suggested allowing students who feel threatened to do their schoolwork online until they’re comfortable returning to the classroom.

The students also discussed the possibility of placing metal detectors at LHS’ entrances, which has long been a controversial method of securing school buildings. The Lawrence school board said in April that it likely wouldn’t consider such measures.

“I feel building up physical security is not the way to go,” she said. “Adding metal detectors or clear backpacks will take away from that color of our school.”

The school plans to have more student-led conversations throughout the semester. Interim Principal Cynthia Johnson told the audience that it’s important to get students’ feedback on the issues that affect them. She also said the students’ ideas would be compiled and shared with the school’s leadership and faculty.

“It’s not just a conversation, it’s about action,” she said. “But if we don’t listen, we can’t move forward. … We’ve got some work to do.” 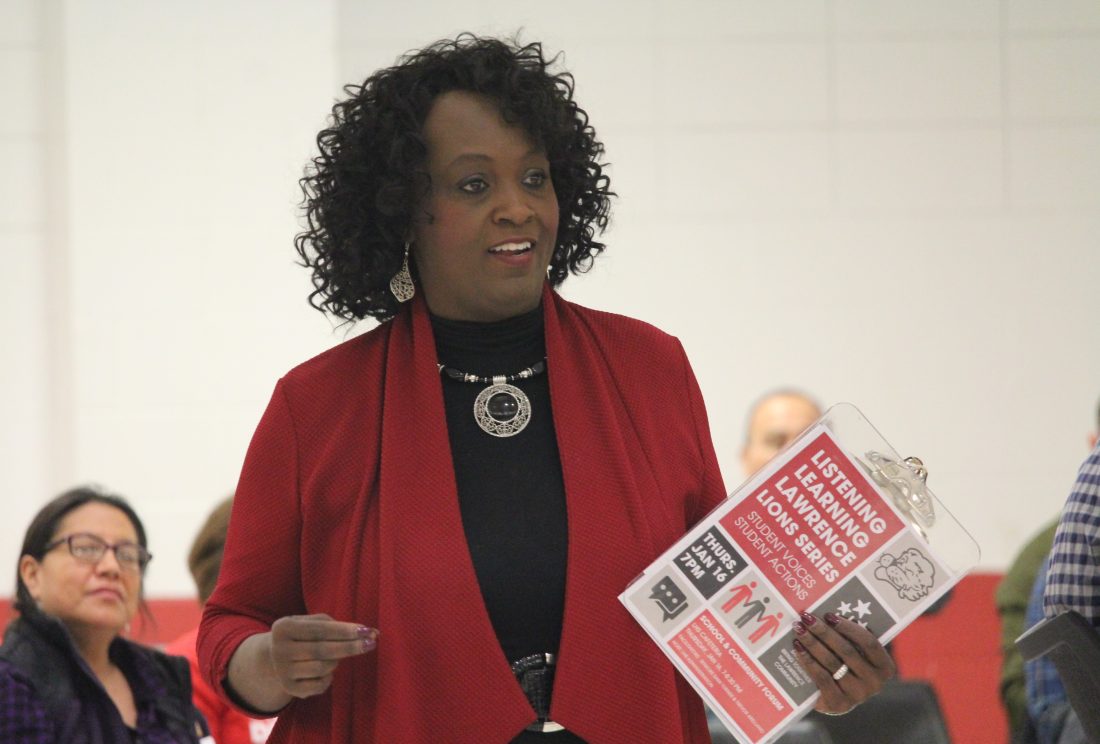 Lawrence High School Interim Principal Cynthia Johnson speaks to an audience prior to a student-led public forum on school safety at the high school on Thursday, Jan. 16, 2019. Johnson said the students’ thoughts are an important part of addressing safety concerns at the school.