3 new Lawrence school board members officially sworn in, creating a majority consisting of people of color 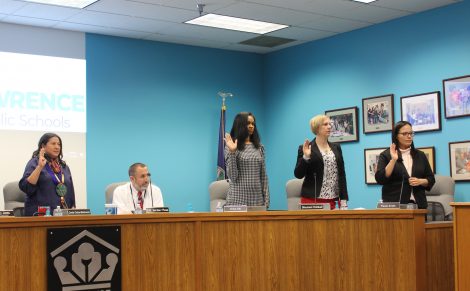 Four Lawrence school board members raise their hands as they are sworn into by Douglas County Clerk Jamie Shew on Monday, Jan. 13, 2020. The board members include Carole Cadue-Blackwood, left; Erica Hill, center-left; Shannon Kimball, center-right; and Paula Smith, right.

A new majority has officially taken over the Lawrence school board.

During the board’s meeting on Monday, Carole Cadue-Blackwood, Erica Hill and Paula Smith were sworn into their positions by Douglas County Clerk Jamie Shew. Along with board President Melissa Johnson, the three new members create a majority on the board consisting of people of color.

Superintendent Anthony Lewis previously told the Journal-World that the new board is believed to be the first in Lawrence with that kind of majority.

“I’m so excited for this new board,” Johnson told the new members during the meeting. “I’m looking forward to all the things we get to do.”

Incumbent board member Shannon Kimball was also sworn into her position. She will be serving her third term on the board.

Although none of the board members directly mentioned the new majority, board Vice President Kelly Jones echoed Johnson’s excitement for the new board.

“I’m really delighted you are all here,” Jones said to the new members. “I look forward to hearing your voices and perspective and (I) know that we are a strong board and will work well together.”

Cadue-Blackwood, Hill and Smith did not comment during the meeting.

In other business, the board unanimously approved updating its 2020 legislative priorities list to add another priority related to gun control and to voice support for local control over funding decisions.

Kimball said the new priorities are a response to two issues that came up after the board approved its original priority list in December.

The board’s previously approved priority list includes asking for the Legislature to consider a new measure on gun control and to make it harder for students to access tobacco products.

It also includes priorities from the board’s 2019 list, such as providing adequate and equitable funding to public schools as outlined in the state’s constitution, keeping school board elections nonpartisan and supporting local control over school curriculum.

The board added to the list a request for the Kansas Legislature to consider “child access prevention” laws. Such laws make it illegal for adults to keep firearms in a way that a child can easily access them. The proposed update says the laws are needed “to decrease the number of gun-related incidents, and hold adults responsible instead of minors.”

The board also added to the list a statement supporting local control over the use of state funding for at-risk students.

Kimball said the board added the priority because of a recent incident where a Lawrence High School student brought a loaded gun to school. Superintendent Anthony Lewis said the school district learned the student had access to the gun “from a family member’s home.”

“USD 497 believes that local districts, with guidance from (the Kansas State Department of Education), should have maximum flexibility in determining how best to use at-risk funds for the benefit of at-risk students in our schools,” the statement says.

Kimball, who is also the president of the Kansas Association of School Boards, said the statement is a response to a state audit that found that school districts are not properly using those funds. The audit has led to lawmakers calling for hearings on the topic during the 2020 legislative session, according to a Kansas City Star report.

“Some of the findings of that audit are concerning,” Kimball said. “It doesn’t really recognize the reality of educating at-risk students in our classrooms.”