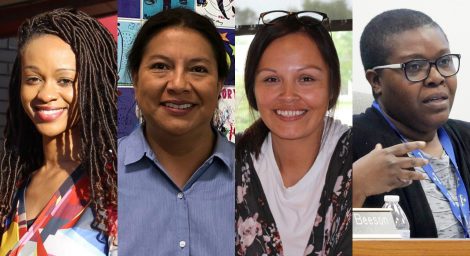 photo by: Contributed and file photos

When a newly elected Lawrence school board convenes for the first time in January, it will have several new faces representing the community.

Most of those new faces will also represent portions of the community that have not always been given the opportunity to serve. It will be what is thought to be the first school board in Lawrence with a majority of members who are people of color.

“I’m just over the moon happy about it,” said Carole Cadue-Blackwood, a Native American woman who was recently elected to the board. “I’m so excited that this is the first school board that has a true representation of our diverse community.”

Superintendent Anthony Lewis said he thought it would be the first time the board included such a majority. However, Julie Boyle, a spokeswoman for the school district, said she could not confirm it would be the first because the district did not keep track of past board members’ races and ethnicities.

Regardless, Lewis, who is also African American, said he was happy to be serving as superintendent in a community that valued diversity.

“This is something we should certainly be excited about,” Lewis told the Journal-World. “What’s most exciting for me is that more of our scholars will be able to look at their school board and see leaders who look like them.”

Hill, who received the most votes in the election on Tuesday, also said it was vital for students to see diverse representation.

The Lawrence school board election reflected what appeared to be a nationwide trend, according to The Associated Press. In Tucson, Ariz., voters elected Regina Romero, the daughter of farm workers, as the first Latina mayor in the city’s history. Political newcomer Frank Whitfield was elected the first black mayor of Elyria, Ohio.

Smith said she was proud to be a member of a community that voted to reflect the community’s diverse population.

“We are currently living in times of change and excitement, especially where our school district is addressing race and equity in our schools,” Smith said. “A racially diverse board will enhance innovation, legitimacy and school outcomes.”

Advocating for diverse representation is nothing new for the new board members, as seen recently by Cadue-Blackwood and Smith.

Cadue-Blackwood was a leader in the campaign to change the name of South Middle School to what is now known as Billy Mills Middle School — after a Native American Olympian who attended Haskell Institute and the University of Kansas.

Meanwhile, Smith was serving as the school district’s committee chair for the Native American Student Services program, which addresses issues facing Native American students. On that committee, she pushed to have more conversations with the school board, allowing it to learn more about those issues.

“I’m looking forward to working together with this stellar team of board members who reflect our diverse population,” Cadue-Blackwood said. “It’s imperative that we can continue to identify, address and look for solutions that promote social justice and change.”

Although people of color will make up a majority of the board, the board also appears to include an evenly diverse breakdown among the representatives — with two African American, two Native American and three white board members.

Hill said she hoped the board’s racial diversity would have a significant impact on addressing issues related to race within the school district, including achievement gaps among student populations.

“School boards with members of diverse backgrounds, experiences, gender and ethnicities can benefit from a variety of perspectives,” she said. “Having access to these various viewpoints is valuable when considering the important decisions that the school board may make regarding educational and policy issues.”

Addressing achievement gaps was a common campaign goal among the recently elected board members, which also includes incumbent board member Shannon Kimball. While several types of achievement gaps exist, a difference in educational success between students of color and other students is one of them.

For example, in recent years the school district’s African American and Native American student populations scored the lowest in state reading and math assessments among all Lawrence students, according to data shared during the school board’s Oct. 28 meeting.

As a current board member, Johnson said she was excited to work with the incoming group. She said she was happy to see that they were all focused on addressing achievement gaps, which is part of the school board’s recently adopted five-year strategic plan.

Johnson noted that these were the goals of all board members, not just the new majority.

“The full board has committed to addressing all board governance and budget considerations through an equity lens,” she said. “Point to any board member and I can cite an example of their commitment.”

The election of the new board members is just one step in addressing these issues, Lewis said. The board and district administration still need to make progress on addressing the achievement gaps and taking a deeper look at discipline disparities, which includes looking at whether students of color regularly receive more severe punishments than other students, he said.

“I will tell you that our current and new board members are committed to this work,” Lewis said. “We are on our way. The best is yet to come.”

— The Associated Press contributed to this report