Allie Martinez, a senior at Free State High School, stands in front of the Don & Beverly Gardner Center for Great Futures on Monday, Feb. 17, 2020. Martinez was recently named the Boys & Girls Club of Lawrence's Youth of the Year.

In a little over a month, Allie Martinez will be giving a deeply personal speech in a statewide Boys & Girls Club competition. But that’s far from the only thing on her mind right now.

Once she graduates from Free State High School, she said she’ll probably be moving to New York, Los Angeles or another big city for architecture school — a big change from her life in Lawrence. She’ll be far away from her family and friends. And on top of all that, she’s still figuring out how to pay for her education.

But the Lawrence Boys & Girls Club’s 2020 Youth of the Year isn’t going to let any of that scare her off from pursuing her dreams.

“She can come off as very confident, but she’s afraid and worried like every other teenager,” said Susan Borchardt, Martinez’s mentor in the Boys & Girls Club. “But the part about Allie that is different is that she will take the risk.”

And Martinez said a lot of her confidence is because of the relationships she’s built in the club.

“It definitely makes my confidence level much higher and I feel like I can take more risks now,” she said of the club and her mentor supporting her. “I feel like I can succeed more knowing I have the support and have someone who believes in me like that.”

One big risk she took recently was putting herself in the public eye — twice — in the Lawrence Youth of the Year competition the last two years. The competition aims to honor a local teenager who embodies the values of the Boys & Girls Club: leadership service, academic excellence and healthy lifestyles.

Now, as the Lawrence winner this year, she will go on to represent the community in the state competition, which will be held in Topeka on April 1.

Martinez’s victory in the local competition was especially meaningful for Borchardt, who has been mentoring her since 2018. But Borchardt said she wasn’t surprised, because Martinez is a perfect example of the values of the club.

“She embodies everything that I really want to see in our teen community,” Borchardt said. “She works really hard to be that person.”

Martinez first began attending the Boys & Girls Club in Lawrence when she was in third grade.

She was raised by her single mother, Lisa Rooney, who was attending college courses when Martinez was young. Martinez attended the club every day after school while her mother worked and studied.

She said she originally wasn’t sure what to expect at the club.

“I didn’t quite understand what the club was,” she said. “I just assumed we would stay in the gym and stay there all evening.”

But she quickly learned to take advantage of the opportunities and support the club can provide to students. The organization offers many after-school programs that aim to help students improve in areas such as education, leadership and health and wellness. Staff members also often serve as mentors, much like Borchardt does for Martinez.

“Once I found out how awesome the club is with all these clubs and activities, I always wanted to come back and see my friends after school,” she said. “I have so many big brother and big sister relationships with the staff; it was just natural for me to stay there.” 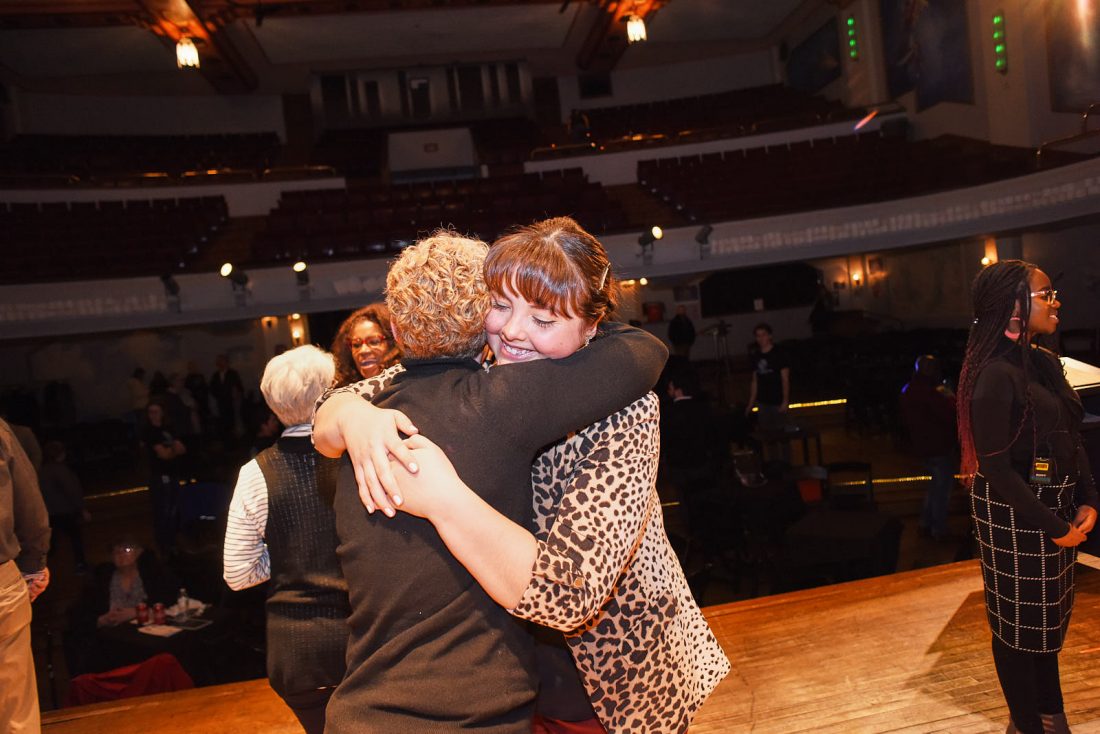 Allie Martinez, a senior at Free State High School, hugs Susan Borchardt after Martinez was named the winner of 2020 Youth of the Year award on Thursday, Jan. 30, 2020.

Of course, Martinez’s journey has not always been easy.

As a finalist for the Youth of the Year event two years in a row, Martinez has given two speeches for the competition. In 2019, she focused on her “Try Me” mantra, which she said is a saying that represents her response to adversity and her plans to overcome it.

In that speech, she discussed her financial struggles, such as the stress of figuring out how to afford to pay for college — an issue she’s still struggling with, she said.

“At the time I thought I had overcome all of that stuff, but I’m still going through that,” she said.

Then, months later, Martinez broke her leg right before the beginning of her senior year of high school. In this year’s speech, she built on the “Try Me” mantra and focused on her new saying, “Show Up.”

She said the new mantra was inspired by her peers at the club, who were often there to help her during the four months she spent recovering from her injury.

Borchardt was particularly inspired by Martinez’s mantras. She said she was recently invited to an event, but she wasn’t feeling up for it.

That is, until she thought of Martinez and her mantra to “show up.”

“She lives it,” Borchardt said. “It’s funny, because we all pick up on it and we start to live it too.”

Now, as an older member of the club, Martinez is something of a mentor herself. She now has two younger siblings, students at Pinckney Elementary School, who attend the club after school as well. She said she also believes it’s important for the older students to build connections with the younger ones.

“Especially when (the eighth grade students) go to high school, they are going to have somebody they know,” she said. “They are going to know a familiar face, and that’s going to make them feel more comfortable.

“That also helps high schoolers learn how to be positive role models and understand what they say and do is impactful to other kids,” she added.

Additionally, during the summer months, Martinez put her leadership skills to work by teaching art classes to younger students.

“I really wanted to spread the art and creativity here with other kids,” she said.

Focusing on art and creativity is not surprising, because once Martinez graduates from Free State, she plans to study architecture in college.

Martinez became interested in architecture through her grandmother, who is a manager for the Lawrence construction company B.A. Green Construction, she said. She was particularly interested in the hands-on learning opportunities that are available in the architecture field, and she said she also wants to enter a male-dominated industry.

“I’m really interested because I’m a woman and I’m a Latina, and I think it’s important to have representation, especially in those fields,” she said. “My goal is to work for a bit and hopefully own my own company one day.”

If she ever does that, she wants to make sure she gives back to “kids in my position now” by providing scholarships for them to attend college.

While paying for college may be a challenge for Martinez, getting in won’t. She has already been accepted to a few schools, including Otis College of Art and Design in Los Angeles. But the institution she really wants to attend is Cooper Union, a New York City college known for its art, architecture and engineering programs.

“I really want to go there,” she stressed.

Michael Williams, a teacher at Free State, said in an email to the Journal-World that he expects to see Martinez do well in the future.

Martinez has taken classes from Williams on drafting, which is the practice of putting architectural and engineering designs into technical plans. He said she has a talent for it.

“Good drafting is a way of telling a story that conveys information accurately and efficiently,” he said. “Allie is an artist, very organized in her approach to a task, and pays close attention to detail. All are important qualities for a drafter.”

He said Martinez has a great attitude and those who get to work with her in the future will be lucky.

“She’s a great person. I look forward to watching her continue to grow,” he said.

Coincidentally, Martinez will find out if she’s accepted into Cooper Union on April 1, the same day she will be giving a speech in the Kansas Youth of the Year competition.

“I’m excited, but I’m obviously a little bit nervous,” she said of the upcoming competition. 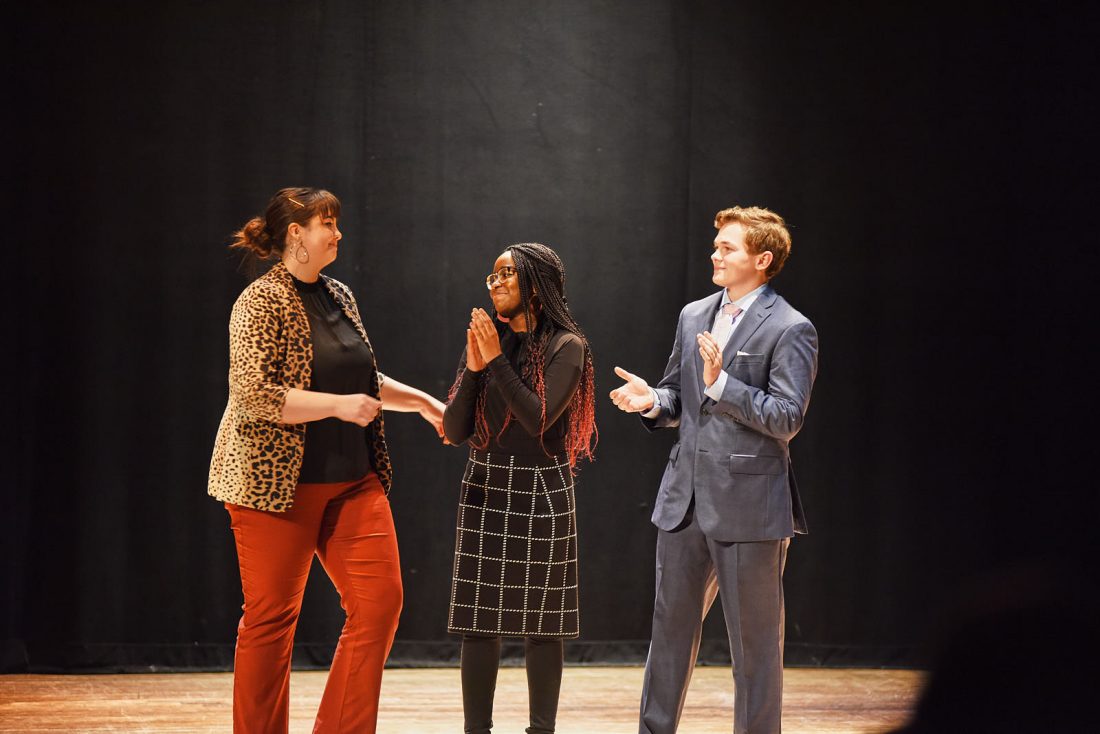 Finalists Akosua Danso, center, and Clay LaPierre, right, congratulate Allie Martinez after she was named the winner of the Boys & Girls Club’s 2020 Youth of the Year award on Thursday, Jan. 30, 2020.

Martinez said she focused on colleges in New York because her mother is originally from there. Some of the other colleges she applied to are Barnard College and New York University, both of which are also in New York City.

But Martinez said she realizes that the schools she’s considering are all out of state, and many of them are in the country’s largest cities. That’s very different from Lawrence, where she went to school for her entire K-12 education.

Martinez is aware she is going to miss her family, friends and mentors at the club. But she said the support she receives from them helped her realize she could do it — another risk worth taking.

But no matter where Martinez goes, Borchardt said the Boys & Girls Club will be there too.