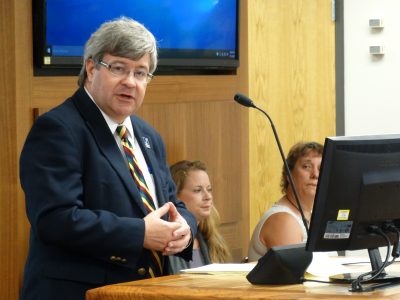 In this undated file photo, Mark Tallman speaks to the Kansas State Board of Education. Tallman is the associate director of advocacy and communication for the Kansas Association of School Boards.

Changes to the state’s higher education admissions standards could have some benefits for Kansas students and school districts, but it may have some drawbacks as well.

Mark Tallman, associate director of advocacy and communication for the Kansas Association of School Boards, told the Journal-World on Monday that the Kansas Board of Regents’ changes to the admission standards for its six state universities could help increase the number of students who pursue college, but may also end up allowing in students who are ill-prepared.

“This change may give more kids the opportunity to try, but that doesn’t necessarily mean kids are going to succeed,” Tallman said.

When the Regents adopted new admission standards on Sept. 18, they chose to move to a system that focuses on students’ high school grade point average rather than their academic rank in their class. Regents officials said the change was needed because GPA better reflected how well students would do in college.

But the changes also involve all six universities changing their precollege curriculum requirements. As opposed to requiring specific courses, the universities will now require high school students to complete 21 classes, or “units,” in specific areas, including four units of English and three units each of math, natural science and social science.

Tallman said the change to the precollege curriculum requirements meant students may be able to take courses in those academic units that don’t provide the same content that was in the previously required courses. That could lead students to be admitted to college when they aren’t ready.

“Without the same kind of guidance for courses to take as an entrance requirement, the concern is simply there may be more students who maybe aren’t paying attention, or high schools may have less pressure to provide these courses,” Tallman said. “So that means the students who decide to go to these universities may not have the academic background to do so.”

However, K-12 education could see some benefits because of the change, including increasing the number of Kansas high school graduates who are college eligible and providing students with more flexibility when selecting high school courses.

The changes may also help schools going through the Kansas State Department of Education’s school redesign project, which focuses on allowing schools to provide more individualized plans of learning to students. Tallman said the change to the precollege curriculum requirements would give those schools more flexibility to explore those plans by allowing students to take courses outside what was previously required.

Additionally, the changes could help allow the state to address a recent concern that the education system is not producing enough students who have postsecondary credentials, be it a college degree or trade certification.

However, Tallman said the changes may also mean the K-12 school districts will have more responsibility for their students knowing what they want to do after high school and then build a plan for them to reach those goals.

“The onus comes back to saying this could give more flexibility, and that can be positive, but if we’re not also making sure students are being deliberate of what they want to do, then we run the risk of more kids arriving at college not academically prepared,” he said.

In Lawrence, the change does not appear to be of much concern. Anna Stubblefield, deputy superintendent, said the school district also thinks the changes could potentially provide more opportunities and flexibility to students.

Additionally, she said the school district had always been focused on making sure students were prepared for a career or college when they graduated. The new standards will mean the school district will need to communicate with students and parents about the choices that will be available.

“Schools are just going to need to be very proactive when students are creating plans of study and making choices with their parents that they are aware of their options at the end of their high school career,” Stubblefield said.

When asked how schools across the state are handling the change, Tallman said the Regents decision came faster than he expected and schools may only now be thinking about how it affects them. He said many schools may not have been aware the Regents were considering the change until it happened.

Moving forward, Tallman said he thought there may need to be some sort of cooperation between the schools and universities to further understand what the change means to make sure they aren’t failing to prepare students.

“This is part of a whole possibly different way of how we deliver education … but it doesn’t spell out how we would do it,” Tallman said. “It’s very different to what we’re used to doing in the past.”