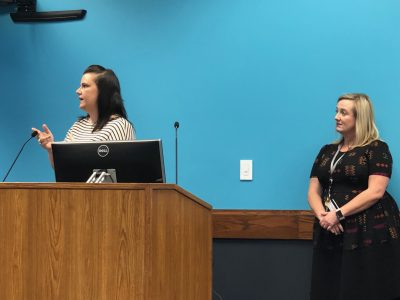 Leah Wisdom, left, director of instruction, equity, and student services, and Melissa Blevins, principal of Sunflower Elementary School, speak to the Lawrence school board about expanding education program AVID to the district's elementary level during a board meeting on Wednesday, Sept. 23, 2019.

Students as young as kindergartners could be seen taking notes during class in the Lawrence school district if it chooses to expand an educational program.

As part of its recently adopted strategic plan, the Lawrence school district is exploring expanding AVID, an education program that aims to address achievement gaps, to its elementary level, said Leah Wisdom, director of instruction, equity and student services.

During the school board meeting on Monday, Wisdom told board members that the expansion of the AVID program, which is currently used at the high school and middle school levels in the school district, could help remove educational barriers for Lawrence’s youngest students.

At the secondary level, AVID — which stands for Advancement Via Individual Determination — attempts to close the achievement gap by helping place more students in advanced placement courses. It targets minority students and those facing other challenges that would hinder their chances of attending college and provides them with tutoring and support, according to previous Journal-World reports.

AVID Elementary focuses on teaching students organizational skills and best practices in learning, said Melissa Blevins, principal of Sunflower Elementary. She said that would include teaching students to begin taking notes in class beginning in kindergarten and continuing all the way through fifth grade.

“The point is to prepare students to be good students,” Blevins said.

Wisdom said the program includes data collection, which could help the school identify how well the program is performing if it is implemented. Blevins, who previously helped implement the AVID elementary program at two schools in Topeka, said those Topeka schools saw an increase in student performance on state assessment scores after the program was established.

However, Board President Melissa Johnson said she wants to see more data on the program before the school district moves forward with implementation.

“I like the idea behind it, but ultimately we want data-driven decisions,” she said.

Wisdom said the elementary program is fairly new and not a lot of data exists yet, but she said the school district plans to meet with some other schools that have implemented the program so they can see how it has worked and ask questions.

Wisdom said the next step is to bring elementary school principals together and gauge their interest in implementing the program, noting it could be initially installed at just a couple of the schools. She said the school district will need to make a final decision on expanding the program by January 2020.

In other business, the board accepted the resignation of Pinckney Elementary School Principal Kristi Hill. Her last day was Friday.

The school district said Hill chose to resign for personal reasons, according to a late Monday news release.