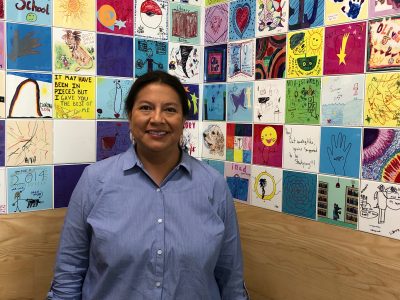 Lawrence school board candidate Carole Cadue-Blackwood stands in front of student art displayed at the Lawrence Public Library. Cadue-Blackwood is one of five candidates running for election.

“I was really skinny, we were really poor, and I got bullied,” she said. “(The teacher) said, ‘I bet a dime to a dollar you won’t finish high school.’ And I believed it.”

However, that teacher was wrong, and Cadue-Blackwood now wants to be a voice on the Lawrence school board for underprivileged students in Lawrence who may be facing the same discouragement and struggles, she said.

“The ones who are falling through the cracks, I want to know why and I want to know how to support them,” she said. “You need that person to say, ‘OK, what’s going on?'”

Cadue-Blackwood, one of five candidates for the school board election this fall, is no stranger to the school district. Her entire K-12 education came from the Lawrence school district, where she met her husband, Dennis Blackwood. She also has three children, two of whom currently attend Lawrence High School and another who graduated.

But her most public involvement with the school district was leading a campaign to change the name of South Middle School to what is now known as Billy Mills Middle School — after a Native American Olympian who attended Haskell Institute and the University of Kansas.

After a South Middle School teacher was suspended amid allegations of racist comments, Cadue-Blackwood could see there was a need to educate the public on Native American students in Lawrence and their experiences in the district. She said the district needed a larger voice for those students. The substance of the suspended teacher’s comments were never disclosed by the district.

“We have this great big population of Natives and they weren’t being brought up (during discussions after the incident),” said Cadue-Blackwood, who is Native American. “That’s what led to the name change.”

Part of ensuring an equitable educational environment is “enforcing” a recently approved state education funding plan, she said. After years of court battles, the Kansas Supreme Court recently upheld the Kansas Legislature’s funding of schools, finding that the state’s plan is adequate and equitable.

Cadue-Blackwood said to keep funding equitable and adequate, schools must support the culture and diversity of all students.

“When you’re poor … and children of color — and I was a child of color — it all goes back to supporting diversity, inclusion and equity,” she said. “As it is, we already have a high level of toxic stress.”

But Cadue-Blackwood said the biggest issue for her personally was the mental health of students. As a recent graduate from KU’s School of Social Welfare, she is currently looking for a job as a social worker, she said. She is also a volunteer for the Willow Domestic Violence Center.

Through her education and volunteering, she said she worked with people struggling with addiction and realized that many of the problems that led them down that path began when they were students.

“I would wonder when and where a social worker could have intervened,” she said. “It always goes back to the schools.”

Cadue-Blackwood graduated from Lawrence High School in 1992. She got an associate’s degree from Haskell Indian Nations University and a political science degree from KU. She took some time off from school to raise her children, then returned to school to earn a master’s degree in social work.

Cadue-Blackwood is one of five candidates running for the four at-large positions on the Lawrence school board that are up for election this fall. The general election will be Tuesday, Nov. 5. Advance voting will start Wednesday, Oct. 16, and the last day to register to vote is Tuesday, Oct. 15.