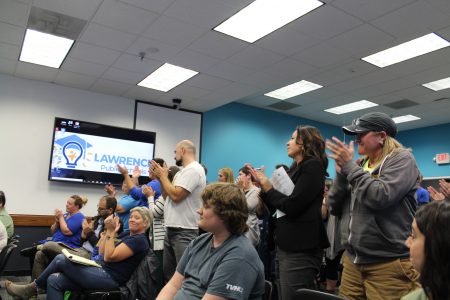 Parents and faculty members of Pinckney Elementary School give a standing ovation to one of the parents who spoke to the Lawrence school board about the resignation of former principal Kristi Hill. Some parents suggested the school district did not provide enough support to Hill.

Several parents of students at Pinckney Elementary School on Monday voiced frustration over the resignation of former principal Kristi Hill, suggesting that the school district did not provide her with enough support.

Some of the parents who spoke to the board said Hill resigned because she received harassment for months from parents of a student at the school and the district failed to act to remedy the situation.

“I’m extremely disturbed by the lack of support and professionalism at the district level,” said Joanne Morrel, one of the parents who spoke to the board.

“Frankly, it’s shocking this situation has happened or can even happen in the first place,” she added, noting the school district has a policy that prohibits the bullying of employees.

Some parents also said Hill was a champion for students in the school who are on the autism spectrum. They said her resignation caused uncertainty for those students, who can be negatively impacted by change.

The details of what led to Hill’s resignation are not clear. Board members said they could not share those details, citing the district’s policy that bars publicly discussing personnel matters. The board approved her resignation during its Sept. 23 meeting and hired Vicki Weseman, a retired school administrator, as substitute principal.

Hill did not immediately respond to the Journal-World’s request for comment on Monday. Additionally, Hill declined to comment in late September when the Journal-World first asked about her resignation.

However, the board members thanked those who shared their thoughts on the issue. They said they appreciate the school community, often referring to it as a family, and said the board plans to take their concerns into account when finding a permanent replacement for Hill.

“We hear you and we understand this is a really hard time for your school community, and I’m sorry for what you are going through,” board member Jessica Beeson said.