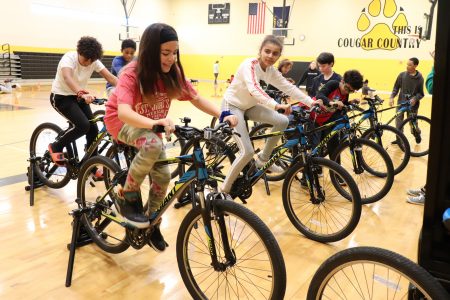 Sixth graders at Billy Mills Middle School participate in a bike riding activity that is part of the new Splash, Spin, Sprint fitness curriculum from USA Triathlon during school on Tuesday, Nov. 19, 2019. The school is piloting the program with plans to expand it to all sixth grade physical education classes by the end of the school year.

A new fitness curriculum at Billy Mills Middle School could lead to students following the career of their school’s namesake.

Keith Jones, principal of Billy Mills, said a sixth-grade physical education class at the school was the first in the country to pilot a new fitness education program called the Splash, Spin, Sprint Curriculum. The program is based on the three sports that make up triathlons: swimming, biking and running.

The curriculum is fitting for the school that is named for Billy Mills, an Olympic gold medalist who ran in long-distance track and field events. Jones said he liked the curriculum because it exposed students to Olympic sports like biking and swimming, which many schools do not provide to students through their athletic programs.

“We may not have those sporting events or activities, so I’m excited it exposes them to nontraditional activities and it gets them outside the box,” Jones said.

The curriculum was provided to the school by the United States Triathlon Association, also known as USA Triathlon, which is the governing body for triathlon and other multisport races in the U.S. The Colorado Springs, Colo.-based organization is also part of the U.S. Olympic Committee and provides leadership to Olympic athletes who participate in those sports.

Caryn Maconi, a spokeswoman for USA Triathlon, confirmed Thursday that the Lawrence middle school was the first in the country to implement the new fitness curriculum. The school began piloting the program on Monday with the help of Meg Duncan, USA Triathlon’s youth program manager.

Duncan, who visited the school earlier this week, said in an email to the Lawrence school district that the new curriculum aimed to expose students to the three triathlon components, which are considered “lifetime” fitness activities. The curriculum also focuses on educating students about how physical fitness can lead to healthy lifestyles and why that is important.

Along with the activities, students who participated in the pilot curriculum this week were given wristwatches that tracked their fitness, similar to an Apple Watch or Fitbit, Jones said. The students will use them to help understand how the activities are affecting them.

“They are having conversations around their health,” Jones said. “Just having that dialogue is powerful as we talk about kids taking care of their bodies and how to eat healthy and stay healthy.”

Although the school is currently piloting the program, Jones said it planned to expand it to all sixth grade physical education courses as part of its curriculum by the end of the school year.