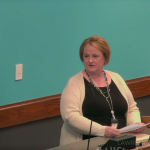 In this screenshot from the Lawrence school board's April 22, 2019 meeting, Denise Fish addresses the board on behalf of the Paraeducators Association of Lawrence.

A public speaker at the school board’s last meeting has prompted a discussion, scheduled for Monday, about the Paraeducator Association of Lawrence.

Denise Fish, an instructional support assistant at Prairie Park Elementary, spoke to the board April 22 on behalf of the association, PAL. She said a poll of all district paraeducators found that PAL could have 121 additional members if its membership fees could be paid through automatic payroll deduction.

At the meeting, Fish said that PAL leadership had met with district administrators during the first semester and asked them to consider the request.

“We were told that it was an item they would like to discuss with the board privately, and we have followed up on these items throughout the year and have received no response to indicate any progress,” Fish said, reading a prepared statement at the board meeting. “For all of the positive dialogue conferred at the district level in the first semester, we feel as though that good will might have lost its steam in the second semester of this year.”

Fish said payroll deduction was the most economically feasible option for members or potential members, “whose pay inhibits them from ever having the bulk membership fee to pay at once, and who oft fear that a debit might come across on their account when the bills were simply too much for their pocketbook that month.”

During commentary, board member Kelly Jones requested that the board receive more information about PAL’s request during a meeting in the near future. That discussion is on Monday’s agenda.

• Kathy Johnson, executive director of finance, will update the board on the district’s budget and present “information on a budget neutral option proposed to add the necessary Full Time Equivalent staff needed to meet staffing ratio requirements based on projected enrollment for 2019-2020 and to address support staff changes due to department restructures and attrition,” according to agenda materials.

Staff will seek board consensus on the option presented so that human resources and building administrators can move forward with hiring prior to the board giving final approval to a budget later this year. Further information about the option was not included in the board agenda as of Sunday afternoon.

• The school board will hear a curriculum update from district administrators.

• As part of its consent agenda, the board will vote on roof replacements for Broken Arrow and Hillcrest elementary schools at $1.28 million, plus a 10% contingency of $129,000, for a total of $1.41 million. The consent agenda includes items considered routine, adopted by one motion unless a board member or the superintendent requests that an item be pulled for discussion.

• The board will receive an update on the district’s strategic planning process. A report to accompany the update was not available as of Sunday afternoon.

The school board will meet at 6 p.m. Monday at district offices, 110 McDonald Drive. Complete agenda materials are available via usd497.org.