‘The Ruth is on fire’: Two-time Lawrence and Kansas Youth of the Year shares her story, struggle and hope 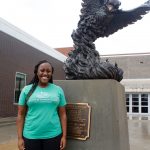 When she needed it most, the Boys & Girls Club became a second home for Ruth Gathunguri.

It’s been close to a decade now, but the 18-year-old Free State High School senior vividly recalls locking herself in her room, away from the screaming, when her older brother would come home high.

“My parents were not having it at all. They would lock him out of the house; he’d be banging on the windows,” Gathunguri said. “… I clearly remember my mom crying every single night, hoping that her child was not dead on the street.

“And those are experiences that I’ll always have with me, and it really defined the person I am and that I would never want to do that to my family,” Gathunguri said.

Amid the tumult of her second grade year, she found a safe haven in the Boys & Girls Club at Quail Run Elementary School.

No matter what was happening at home for Gathunguri, one of her mentors, “Mr. Tristan” — Tristan Penn, who is now director of a Boys & Girls Club program in Portland, Ore. — could make her smile without fail by calling out, “The Ruth, the Ruth, the Ruth is on fire.”

The club has been a constant through her unique victories, struggles, triumphs and setbacks. Gathunguri has contended with internal and external blows to her self-image, gleaned wisdom and leadership experience, and sought balance in her life as she’s metamorphosed into the twice-named Boys & Girls Club Kansas Youth of the Year.

Gathunguri is thrilled to say that her brother, Simon, 27, is “doing amazing now.” He got his degree in nursing and he’s been clean for several years, she said.

A couple of years ago, he started to reach out and come back to the family, which includes her mother, Faith, a small-business owner, and her father Gilbert Karuga, a professor in the University of Kansas School of Business. Now the siblings hang out and go to movies, Gathunguri said. 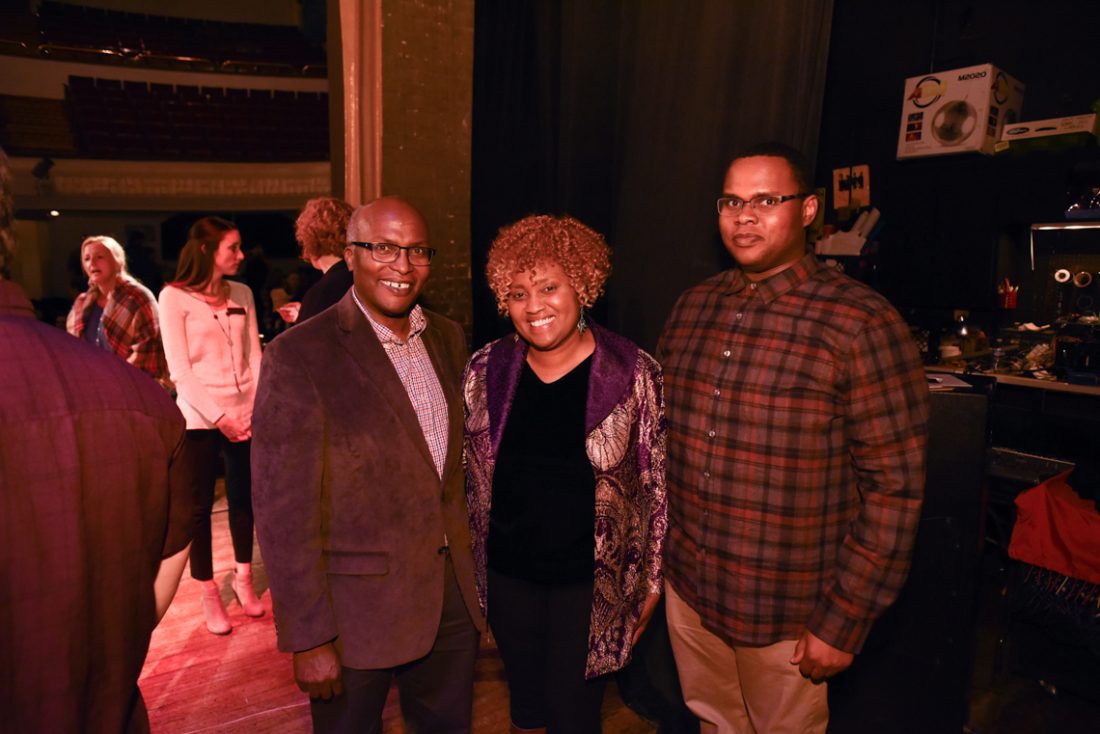 The family of Ruth Gathunguri — father Gilbert Karuga, mother Faith Gathunguri and brother Simon Gathunguri — are pictured at the Boys & Girls Club of Lawrence Youth of the Year ceremony on Jan. 31, 2019 at Liberty Hall.

“We’re really building a relationship, and he’s really pushing to get to know … the Ruth that I am today,” she said.

Though it’s one of the differences she loves about herself now, Gathunguri as a child became ashamed of her Kenyan descent.

In her 2018 Youth of the Year speech, Gathunguri discussed being “literally the black sheep in the crowd” growing up, as all of her classmates and neighbors were white.

“My first exposure to how insanely difficult it is to be a black woman in America came at a very early age,” she said in the speech.

She had been so excited for her mother to come speak to her preschool class — both of her parents are from Kenya, and she thought it would be a great opportunity for her classmates to appreciate her culture, Gathunguri said in the speech. Instead, the kids made fun of her.

In an interview with the Journal-World on rainy Thursday afternoon, Gathunguri said that she never had a problem with not growing up in the “standard American home” until she noticed that other people had a problem with it. So even though she wanted to bring Kenyan food for lunch, she asked her mom to make her peanut butter and jelly sandwiches.

“Even the clothes we wear, the music we listened to — I didn’t want people to see that side of me and judge me based on my culture,” Gathunguri said. “I still had pride about my culture. I just didn’t want other people to make fun of it, so I hid it away from everybody else.”

But the Boys & Girls Club empowered her to love herself and her culture, and to embrace both, Gathunguri said.

“I’m proud of being Ruth, and Ruth is a Kenyan American girl who’s grown up here in the states but still has been impacted by her Kenyan family,” she said. “So I think it’s just that pride that the club gave me to feel confident and beautiful exactly the way I am is what helped me embrace my culture, also.” 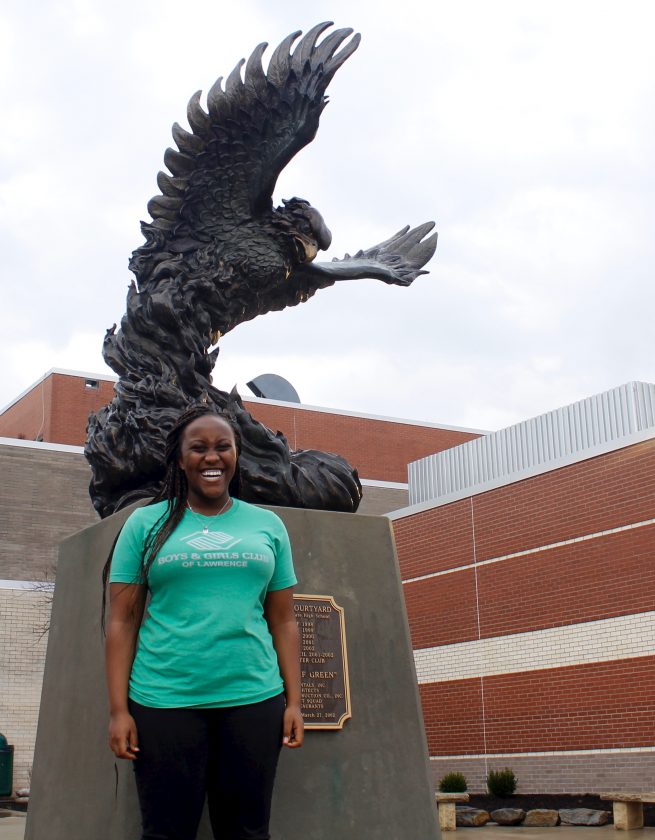 As that proud Kenyan American girl has grown up, her role in the club has changed. To the fifth grade kids at Sunset Hill Elementary, she’s Miss Ruth, their group leader.

It’s a role that suits her passions. Gathunguri plans to go into education, and although she said her future is not set in stone, she is sure about one thing.

Gathunguri herself is on an upward trajectory now. But neither the little girls who admiringly watched her give her speeches nor any of her mentors realized that from the start of Gathunguri’s sophomore year until her summer as a rising junior, several years of struggling with poor body image had led her to bulimia.

As she lost weight, she heard positive feedback about her appearance, which she began to associate with the negative experience of “hurting my body over and over again.”

She heard from her peers that she looked good, but it was the words of the little girls who looked up to her that echoed in her mind after she purged.

“‘You’re so beautiful; I want to be just like you, Miss Ruth.’ And I’m over here spewing my guts out in a toilet and standing on the scale and crying over this number that means absolutely nothing about my character,” Gathunguri said, tears glistening in her eyes.

Eventually, she wrote about her eating disorder in an essay, which her mentors read; at their insistence, she then told her parents.

She wanted to be the person those little girls saw in her — “so the Boys & Girls Club has helped me through a lot. Through a whole lot.” 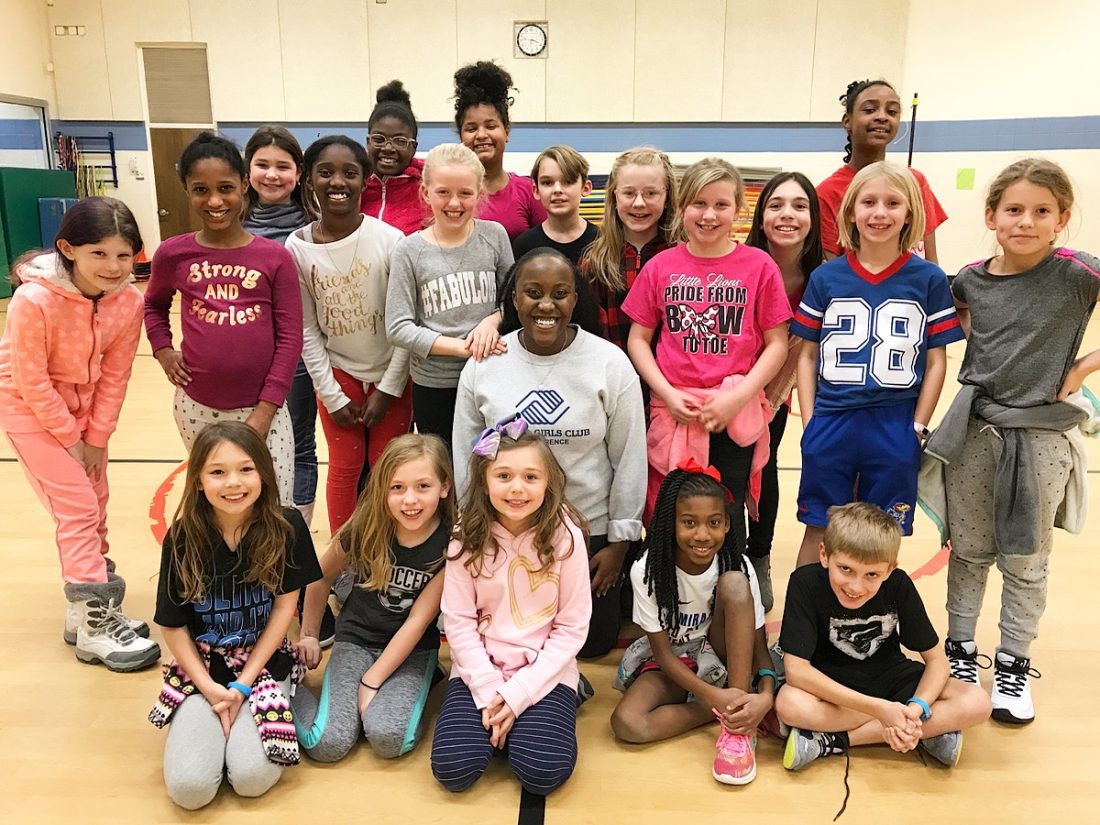 It’s a daily battle now, Gathunguri said. She’s rebuilding her relationship and attitude toward food and taking charge of her health. She said it’s all really improved; she wants to have a healthy body, and she doesn’t want to hurt it.

She said that in whatever field she ends up working, she wants to be a listening ear for those who need one, and she’s going to be very vocal about her experiences to uplift people and use herself as living proof that they can make it.

“With social media, teenagers just don’t know how to express what they’re feeling and what they’re going through, and they end up hurting their bodies in so many different ways,” Gathunguri said.

She’s planning to go to Johnson County Community College for the first couple of years post-graduation, and she’s not sure what’s next after that — although she’ll “always be a Jayhawk at heart.”

For the remainder of her senior year, she’ll stay busy as co-president of Free State’s student body, a role in which she and best friend Seth Williams have aimed to make all events “feel like everybody can come and everybody has something to do.”

She’s also a board member of Can We Talk, a student group at Free State and Lawrence High that talks about hot topics “in a mature way,” Gathunguri said.

“It’s an environment where we try and have safe conversations and challenge each other’s thoughts in a respectful way,” she said. 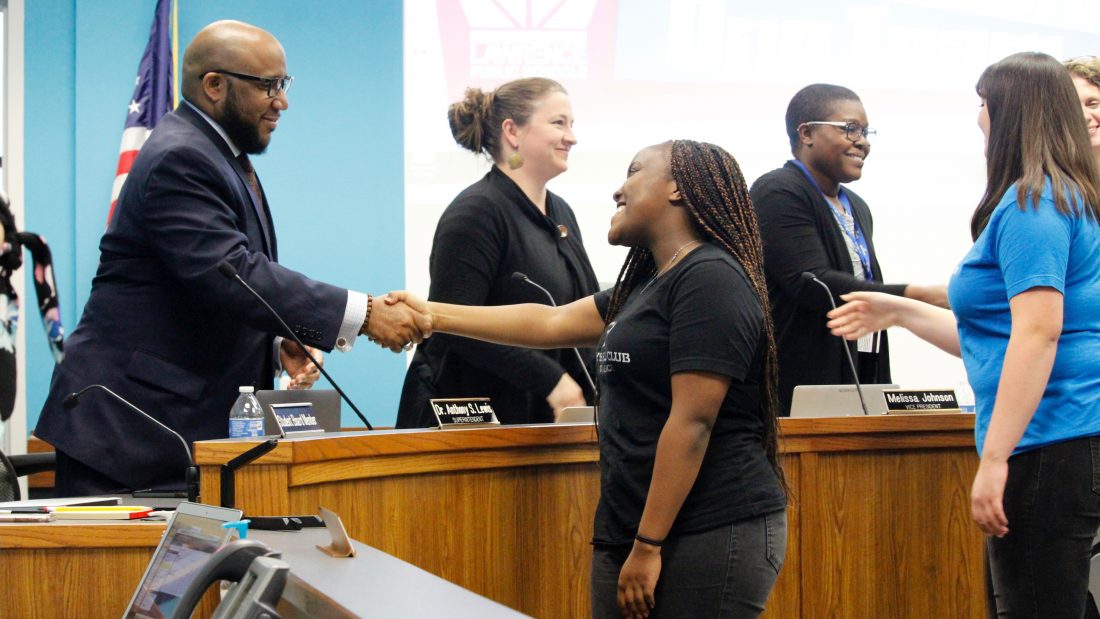 Ruth Gathunguri, center, a senior at Free State High School and the Boys & Girls Club’s Kansas Youth of the Year for 2018 and 2019, shakes hands with Lawrence schools Superintendent Anthony Lewis at a school board meeting on Monday, March 25, 2019. She and the other three Lawrence Youth of the Year finalists were recognized at the meeting. Also pictured, left to right, are board President Jessica Beeson, Vice President Melissa Johnson and board member Jill Fincher; Allie Martinez, a junior at Free State High School and another finalist, is at right in blue.

As the daughter of two immigrants, that’s an issue that grabs Gathunguri’s attention. She’s also passionate about mental health and gun control, the latter of which she spoke about briefly at Free State’s community conversation on public safety on Tuesday, at the invitation of Superintendent Anthony Lewis.

“It’s really cool to have people in leadership look at our youth and say ‘You guys matter, and your voice matters,'” Gathunguri said, “because gun violence in schools is affecting students. Yes, it affects teachers and staff and parents, but sometimes we ignore the people that are growing up going through this.”

She said having adults look at teenagers as leaders — rather than as potentially radical, or poor decision-makers — gives a sense of pride, “and we can really, really make a difference if we keep pushing.”

“Those who earn a Youth of the Year nomination embody the values of leadership service, academic excellence and healthy lifestyles,” Alissa Bauer, director of marketing and communications for Boys & Girls Club of Lawrence, said in an email response to follow-up questions. “They exemplify the powerful impact that the Boys & Girls Club has on kids in Lawrence.”

“I want people to know that it’s this community — that’s why I went back-to-back this year,” Gathunguri said. “Without Lawrence, I wouldn’t have been able to win.”

She said she thinks her love for her club showed through so much at the state level that it’s the reason she won.

Gathunguri and the other two finalists for Lawrence Youth of the Year — Clay LaPierre, a junior at Lawrence High School, and Allie Martinez, a junior at Free State — were recognized and spoke briefly at the March 25 school board meeting.

“We’re really excited and very proud of (Gathunguri) and know that she’s going to represent well at our regional competition,” Colby Wilson, CEO of Boys & Girls Club of Lawrence, said at the meeting. 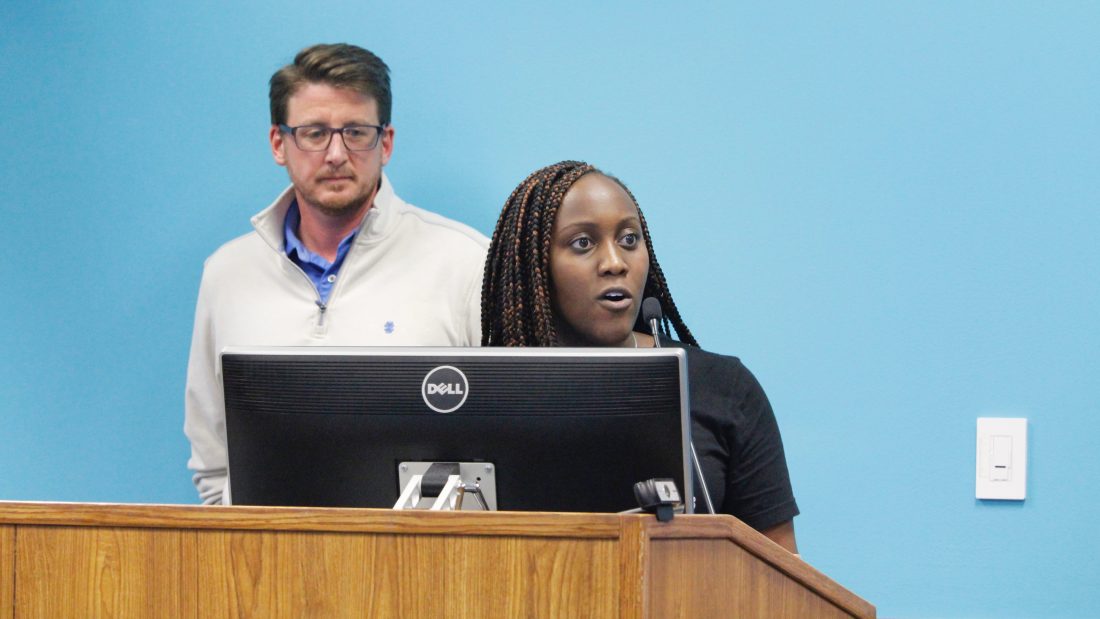 Gathunguri will return to Dallas in the first week of June to vie for the Southwest regional Youth of the Year honor once again.

“I always think about all of my students and all the group leaders and all my friends that I made at the Boys & Girls Club and how they’ve added to the person I am,” Gathunguri said. “And I just want to make them proud by representing them as I go on to the next level.”

Win or lose, Gathunguri said she knows she’ll be part of the Boys & Girls Club “even 10, 20 years from now.”