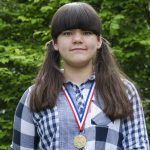 Rose Kennedy, who will be an eighth grader at Billy Mills Middle School, wears the medal she earned this spring for winning the Zaner-Bloser National Handwriting Contest representing Kansas.

Thirteen-year-old Rose Kennedy just got her first cellphone, a long-promised present for completing the seventh grade.

Soon, she’ll undoubtedly be talented at “writing” with her thumbs, although that’s not a talent likely to win her a national award the way her cursive writing has.

Nor is it likely to impress her grandmother in California quite as much.

Her grandmother was the reason Rose developed an interest in handwriting.

“My grandma writes letters to me in cursive,” she said, and Rose wanted to be able to correspond with her in kind.

The interest developed into a talent, which ultimately led this spring to Rose winning the Zaner-Bloser National Handwriting Contest representing Kansas.

The award, according to the Zaner-Bloser website, recognizes “outstanding manuscript and cursive skills among students in grades K-8 and recognizes the teachers who understand the importance of handwriting for developing literacy in all students.”

Three other students in Kansas – in Goddard, Cheney and Tipton – were also recognized for their cursive skills.

Rose, the daughter of John James Kennedy and Hong Zhang, of Lawrence, will be an eighth grader at Billy Mills Middle School. She heard about the contest last winter from Dave Olson, her English teacher.

Every December Olson teaches a cursive writing unit in his seventh-grade language arts class. He said that before the unit he surveyed the students about their knowledge of cursive. Some indicated that they had never really learned it, while many others said they had learned it at some point but hadn’t practiced it in years.

All middle school students in the Lawrence school district have iPads.

“Most of our stuff is typed,” Rose said.

In fact, when Olson gave students an assignment to do in cursive, one of their first questions was “Can I just cursively print this off my iPad?” — referring to cursive fonts available on computers.

“Nice try,” Olson answered. “You have to write it by hand.”

That requirement was fine by Rose, who showed such aptitude for the task that Olson encouraged her to take part in the national handwriting contest.

In the contest, students are judged on how well their handwriting matches standard cursive. For example, in the pangram “The quick brown fox jumps over the lazy dog” — so called because it’s a sentence containing all the letters of the English alphabet — is the capital “T” curved correctly? Are the lowercase “z” and “q” and other descenders neatly rounded and similarly sized? Does the “m” have three uniform humps?

Another part of the contest was to answer in cursive the question “How does your handwriting make you a better reader and writer, and why is this important?”

Rose’s answer was that formally writing out words — without the help of “autofill” — helped you to understand them better. And, in a nod to her pen-pal grandma, handwritten notes and letters “are more personal” and “demonstrate patience and care.”

Olson said cursive writing also helped with hand-eye coordination and brain development, a perspective that’s echoed by the Kansas State Board of Education, which has said, “Research supports the role that handwriting instruction plays in the cognitive development of children, and this activity is even more important in an increasingly digital environment.”

Olson encourages his students to take his unit on cursive seriously and to stick with it. Rose was the first of his students to actually win the contest, but that hasn’t been his only victory, he said. Students thanking him later for teaching “a lost art” has been right up there too.