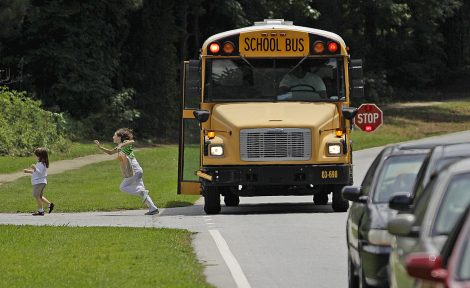 TOPEKA — Kansas education officials are expressing concern that many motorists are ignoring a state law that requires them to stop when approaching a stopped school bus that is loading or unloading children.

A recent survey found 1,040 motorists illegally passed school buses in Kansas during a one-day test in April, The Topeka Capital-Journal reported. The survey included only three-fourths of the state’s school districts, so the number of violations is likely higher.

Education officials are expected to make recommendations during the next legislative session on ways to reduce the number or school bus violations.

Jim Porter, the southeast Kansas representative on the Kansas Board of Education, said he was alarmed 1,040 of 3,300 buses involved in the survey were improperly passed by motorists because it shows drivers’ lack of concern for the welfare of children standing along roads.

“An appalling thing is that 19 passed on the right side of the bus,” he said. “You would have to drive on the curb, the sidewalk or the ditch, in my area of the state, where kids are getting on.”

Kansas law requires all vehicles coming from both directions to stop when approaching a stopped school bus displaying its flashing lights and stop arm. All traffic must pause, whether on a two- or four-lane road. On a divided highway with a median separation, traffic approaching the bus from behind must stop. Motorists have to remain idled until the bus withdraws the stop arm and turns off the flashing light.

A violation of the law would be punishable by a fine and court costs in excess of $240.

Randy Watson, commissioner of the Kansas Department of Education, said the law requires a law enforcement officer to witness the infraction, which makes using videos from cameras on buses difficult.

“We’ve seen some video clips where kids have narrowly been missed by some high-speed vehicles,” Watson said.

Kathy Busch, chairwoman of the Kansas Board of Education, said the Department of Education has launched a public awareness campaign as the new school year starts to try and improve adherence to bus safety laws. It is known as “Stop on Red, Kids Ahead.”

“This is really timely,” she said. “We’ve got to have folks really aware and stop for those school buses. There isn’t anything more important than getting our kids on and off that bus and to school safely.”