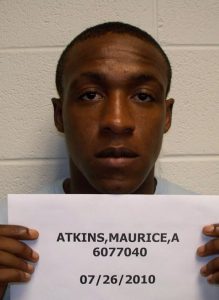 Maurice A. Atkins, pictured in July 2010

A Eudora man was charged Monday in connection with a reported stabbing that left a man with life-threatening injuries on Friday in Lawrence.

The complaint filed in Atkins’ case alleges that he hit the man in the head with a sword and damaged a window. Police on Friday told the Journal-World that a woman was also injured but was treated at the scene.

The man had been flown to an area hospital and remained in critical condition as of Friday afternoon. Kim Murphree, a spokeswoman for LPD, said Tuesday morning that the man was in stable condition and his injuries were no longer considered life-threatening.

As of Monday afternoon, Atkins remained in custody at the Douglas County Jail on $150,000 cash or surety bond, according to online jail records. His next court appearance is scheduled for May 6, online court records indicate.