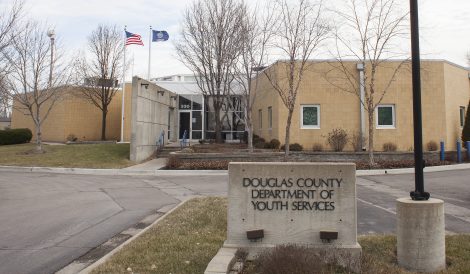 The Douglas County Department of Youth Services is pictured in this Journal-World file photo from February 2016.

Douglas County Youth Services currently has halted in-person visitation but has no plan in place to release youths who have health concerns, a county leader said recently.

Meanwhile, at the state and national levels, youth justice advocacy groups have written letters pushing for youths to be released from juvenile detention centers and halting new admissions to such facilities, as concerns have grown over the global pandemic coronavirus disease, COVID-19.

Pam Weigand, director of criminal justice services for Douglas County, told the Journal-World via email Monday that DCYS has six juvenile offenders in custody, down one from Friday afternoon.

After one of the last pieces of statewide juvenile justice reform measures took effect July 1, 2019, the facility can no longer house youths in CINC, or Child in Need of Care, cases. In recent years, those cases had comprised a growing proportion of the total youths housed in the DCYS facility. The average number of juvenile offenders in custody in Douglas County dropped to single digits in 2018.

The juvenile detention center typically allows residents two visits per week by appointment, according to the county’s website. However, Weigand said Friday that in “an abundance of caution” DCYS is limiting communication with JDC residents to telephone and video chats.

“We have been fortunate that none of the residents have had any symptoms or been ill,” she said.

However, DCYS does not currently have a plan in place to release youth who have health concerns from the facility, Weigand said.

“We continue to make adjustments daily to try to ensure that the residents and staff remain healthy and safe,” she said.

Activist groups, including the national nonprofits Physicians for Criminal Justice Reform and the Youth First Initiative, have launched campaigns encouraging government leaders to release incarcerated youths and to stop admissions.

In response to COVID-19, public health officials across the country have limited gatherings to no more than 10 people. A growing number of cities and counties have issued shelter-in-place orders — including Douglas County, effective Tuesday.

Tyler Williams, a youth leader and community organizer for Progeny, a Wichita-based group of youth activists, wrote in an open letter to Gov. Laura Kelly on Friday about his experiences at juvenile correctional facilities within the state. Viruses and illnesses spread rapidly, and MRSA and scabies were common because of close quarters and sometimes unsanitary conditions, he wrote.

In his letter, Williams asks Kelly to immediately halt new admissions to JDCs, remove any youths who are ill or suffer from chronic illnesses and eliminate incarceration as an option, unless a youth is determined to be a substantial safety risk to others.

In addition, “While some jurisdictions have canceled visitation, we believe that this is not a time for youth to be separated from their support systems,” Williams wrote. “This will only exacerbate mental health issues and further isolate youth.”

Physicians for Criminal Justice Reform asked in an open letter Sunday for state and local leaders and juvenile court judges to immediately release youths who can safely return to the homes of their caretakers and establish and share publicly a COVID-19 safety plan for all youths who remain in correctional facilities to ensure proper access to cleaning and sanitation supplies.

As an example of the potential for diseases to spread within prisons, the letter says it is estimated that up to one-quarter of the U.S. prison population has been exposed to tuberculosis, a rate that is six to 10 times higher than the general population.

“Reports that (COVID-19) may be viable for hours in the air and possibly days on surfaces are particularly concerning,” the letter states. “Though it is believed that people are most contagious when they are symptomatic, transmission has been documented in the absence of symptoms.”

The letter states that the uncertainty about the virus crisis is magnified for families who are separated from their children. “Allowing youth to ‘shelter in place’ with their families can potentially reduce the negative emotional impact that this global crisis may have on their current well-being and long-term adjustment.”

Juvenile detention hearings are among the emergency court operations that the Kansas Supreme Court has ordered to continue amid the pandemic. State law requires that those hearings occur at least every 14 days that a juvenile is in custody unless the juvenile is charged with a crime that, if committed by an adult, would be a high-severity felony.

Douglas County District Court Chief Judge James McCabria issued an order March 12 that allows the Douglas County sheriff the authority to release some adult inmates on 14-day furloughs, if they are ill or at increased risk of COVID-19. As of last week, one would-be inmate was released at intake to self-quarantine for two weeks.