Lawrence masseur masked molestation as massage, told girl she was ‘lucky’ to get one free, affidavit alleges

A girl reportedly told a social worker that a Lawrence man touched her sexually under the guise of a “massage.”

She shouldn’t tell anyone what happened because massages were “really expensive” and she was “lucky” to get one for free, he also allegedly told her.

Shawn Paul O’Brien, 48, of Lawrence, has been charged in Douglas County District Court with one count of aggravated indecent liberties with a child younger than 14. The charge is an off-grid felony, meaning that if O’Brien were to be convicted, he could face a life sentence.

O’Brien was listed in state records as the registered owner of Kamehameha Massage LLC. However, on Feb. 4, he filed a certificate of cancellation to dissolve the business because he “became a sole (proprietor)”, according to the form. The records indicate that the business was operating from 2009 until recently.

The Journal-World requested and recently received the police affidavit supporting O’Brien’s arrest. Allegations in affidavits have not been proved in court, and defendants in criminal cases should be presumed not guilty unless and until they are convicted.

The Douglas County Sheriff’s Office has declined to release O’Brien’s booking mug to the Journal-World.

The girl was around 9 or 10 years old in 2013 the first time the reported abuse allegedly occurred. A Kansas Department for Children and Families worker interviewed the girl in June 2018, about five years later.

The girl said that on a few incidents, O’Brien, a family friend, had offered her a head massage because she was “tense.” He then “worked his way” down to her chest and genitals, touching her under her clothes.

She said the incidents occurred in O’Brien’s home while multiple younger kids were sleeping in the living room, and “the only way he didn’t touch me is if I was sleeping” right next to someone else.

The girl reportedly said she didn’t tell anyone “because she never had a massage before and just thought it was a normal massage.”

As she got older, she realized that what happened “wasn’t ok” and told a therapist before telling a relative, according to the affidavit.

The girl said she wanted O’Brien to “go to jail forever,” according to the affidavit.

A Lawrence police officer reportedly spoke with O’Brien at his business — Medissage-Kamehameha Massage LLC — at 346 Maine St., Suite 160. O’Brien allegedly told the officer that he’d given the girl a head massage a few times, and that someone else was present during all of them.

O’Brien allegedly told police that he gives massages to people of all ages, including children, at his business. He said every time he gave a child a massage, their parents were with them in the room.

O’Brien reportedly said he was “being accused of some serious (expletive)” and that he thought the allegation was someone’s “plan to ruin his life.”

The affidavit, filed Dec. 31, 2019, does not mention any forensic evidence.

O’Brien was booked into the Douglas County Jail on Feb. 7 and released the same afternoon on $25,000 surety bond, the Journal-World has reported.

Court records show that attorney Philip Robert Sedgwick is representing O’Brien. Sedgwick could not be reached for comment Friday afternoon.

O’Brien’s next court hearing is set for Wednesday.

— Editor’s note: This article has been updated to correct O’Brien’s middle name. 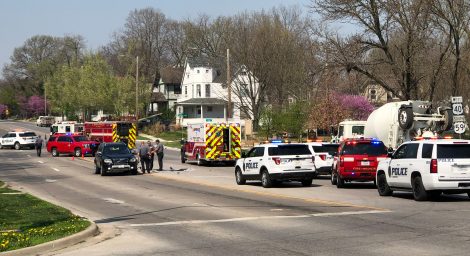 Motorcyclist seriously injured in wreck near 6th and Kentucky streets