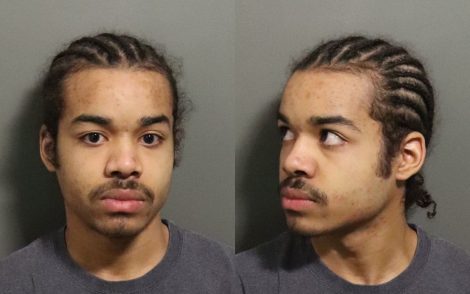 An Overland Park-based defense attorney argued on his client’s behalf that statements the teen had made to police should not be used against him in court.

The contents of those statements were not revealed at a hearing Tuesday, but they may be at trial, based on the judge’s ruling.

Benson J. Edwards Jr. is one of two defendants in a Lawrence double shooting case stemming from a March 29, 2019, incident. Edwards and Sahavione K. Caraway were both 17 at the time and, as of Sunday, they are both now 18. A now-retired judge ruled in December that they would be charged and tried as adults.

Both are charged in Douglas County District Court with two counts of attempted first-degree murder and two counts of aggravated robbery in connection with the incident. Edwards is also charged with being a felon in possession of a firearm.

As the Journal-World has reported, Edwards and Caraway are accused of setting up a drug buy for $100 worth of marijuana vape cartridges, then robbing the teens who reportedly were selling them. Two Lawrence brothers, 16 and 18 at the time, were seriously injured but survived.

During Tuesday’s hearing, and in a written motion prior to it, Edwards’ defense attorney, Thomas Bath, argued that Lawrence Police Detective Lance Flachsbarth should have stopped his questioning when Edwards asked about a lawyer.

Assistant District Attorney Bryant Barton questioned Flachsbarth about two interviews with the teen, showed video of the first and played audio of a second.

In the few moments of video played for the court, Flachsbarth first administers a test for gunpowder residue on Edwards’ hands. Then he and Lawrence Police Detective Mike Verbanic start to ask him a few questions — basics, such as his age, address, height and weight, but also his cell phone number, provider and who pays the bill. They talk and joke a bit about Lawrence High School and other schools Edwards had attended.

Flachsbarth tells Edwards that he’s going to be honest with him, and that the whole incident was caught on video. The detective tells the teen several times that “what you get from me will be the god’s honest truth” and he will not “bull (expletive)” him. Then he reads Edwards his Miranda warning to let him know he has the right to remain silent and to request an attorney. Flachsbarth tells Edwards that at that point, they only had one side of the story, and they wanted to get Edwards’ side.

Edwards asks if there are court-appointed attorneys available in the building right now. Flachsbarth responds, “They are not.” He then he asks one more time whether Edwards wants to talk to the officers, and Edwards says he will.

Bath argued that Flachsbarth, who has been a detective with LPD since November 2000 and had several years of law enforcement experience prior to that, should have further clarified then-17-year-old Edwards’ inquiry, which could be viewed as two separate questions: are court-appointed attorneys available, and are they in the building right now?

Flachsbarth said it seemed like common sense to him that no, court-appointed attorneys don’t have offices in the Lawrence Police Department’s Investigations and Training Center, but that was the question he was answering. Bath emphasized that it was common sense to Flachsbarth — not necessarily to Edwards.

Barton argued that it was clear Edwards understood his rights and what was being asked of him. He was not food- or sleep-deprived, under the influence or being threatened. By asking Edwards again if he was willing to speak without a lawyer present, Flachsbarth did what he was supposed to do, Barton said.

Ultimately, Judge Sally Pokorny agreed with Barton. She said Edwards appeared calm and rational in the video, and when Flachsbarth asked the follow-up question to clarify whether Edwards was willing to talk without a lawyer, Edwards answered without much hesitation that yes, he would.

Edwards’ next court hearing is set for March 20. Caraway’s next court date was not immediately available Tuesday.

• Jan. 6, 2020: Judge’s written ruling details why 2 teens will be charged as adults in Lawrence double shooting

• Dec. 22, 2019: One of 2 teens charged in Lawrence double shooting booked into adult jail on 18th birthday

• Oct. 1, 2019: Judge to rule later this month whether teens charged in Holcom Park shootings will be tried as adults

• July 19, 2019: Hearings set to decide whether teens charged in Holcom Park shootings will be tried as adults