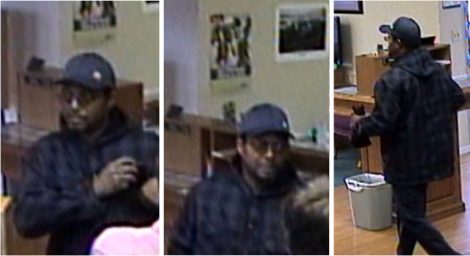 The Lawrence Police Department tweeted out these images of a man officers believe to be involved in a bank robbery on Jan. 31, 2020.

A Lawrence man has been charged in connection with a reported robbery at a local bank, according to court records.

James Milton Pugh, 58, was arrested at 1:15 a.m. Saturday at the address listed as his home following the bank robbery, which was reported around 3:30 p.m. Friday at Landmark National Bank, 2710 Iowa St.

He was charged Monday in Douglas County District Court with one count of robbery, a midlevel-severity felony, and criminal possession of a firearm by a convicted felon, a low-level felony, court records show.

The charging document alleges that Pugh stole cash by force or threat of bodily harm.

The suspect fled from the bank on foot, Bridget Patton, public information officer for the FBI, told the Journal-World Monday.

Around 6:30 p.m. Friday, Lawrence police had tweeted a few images from a surveillance camera of the man allegedly responsible for the robbery. The department’s Twitter followers “successfully identified this alleged bank robber within two hours of this post,” according to a tweet posted six hours later.

Patton said the bureau does not disclose the amount of cash taken.

As of Monday afternoon, Pugh was being held in the Douglas County Jail on $150,000 cash or surety bond, jail records indicated. Should he make bond, he is not to return to Landmark National Bank nor have contact with any victims or witnesses, and he must have GPS monitoring, according to court records.

Pugh’s next court appearance is set for Wednesday afternoon.

The Journal-World has requested Pugh’s booking photo from the Douglas County Sheriff’s Office.