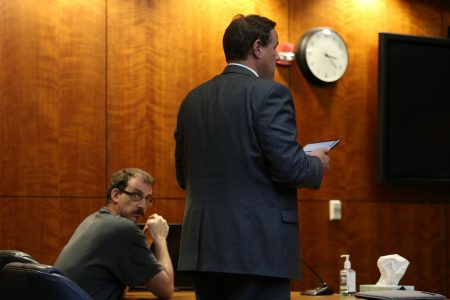 Robert Copas, seated, is pictured during a scheduling hearing on Sept. 5, 2019 in Douglas County District Court. Standing is his defense attorney, Branden Smith.

Sentencing was delayed Thursday in the case of a Lawrence man who has pleaded no contest to a child sex crime.

Robert W. Copas, 37, of Lawrence, was charged in July 2017 with aggravated indecent liberties with a child. In March, he pleaded no contest to the same charge but as a less severe felony, the Journal-World has reported.

Copas was first set to be sentenced in April, but that was delayed after his previous defense attorney, who has since retired, filed a memorandum requesting the lightest possible prison sentence.

An 11-year-old girl reported to relatives that Copas had touched her inappropriately outside her clothes, continuing after she told him to stop, according to the affidavit supporting Copas’ arrest in the case.

Lawrence police interviewed her the same day, and she told police that afterward Copas told her “Please don’t tell, I’m so sorry,” but that she did tell because it was “the right thing” to do, according to the affidavit.

In his court filings, Jim Rumsey, Copas’ previous attorney, said Copas should receive a lighter sentence because “There is plenty of evidence in this case to suggest that (the victim) may likely not have been telling the truth when she claimed (Copas) touched her.”

The memorandum continues with reports from two experts, psychologists whom Rumsey had hired. One of them evaluated Copas and said he was at low risk for reoffending and that he did not fit the criteria of a pedophile.

The other psychologist concluded that police inappropriately “shaped and molded” the victim’s account and took advantage of Copas’ gullibility and low education to obtain “a confession of sorts.” According to the affidavit, Copas confessed to police that he had touched the girl inappropriately and then apologized to her.

In the courtroom of Judge James McCabria on Thursday, Copas’ new appointed attorney, Branden Smith, said the concerns Rumsey cited were substantial, and that they should be addressed prior to Copas’ sentencing.

Copas’ next court appearance is scheduled for Oct. 16.