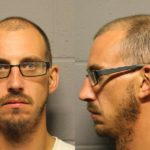 Emphasizing that his client pleaded no contest — as opposed to guilty — a defense attorney now says a Lawrence man should get the lightest possible prison sentence because his child victim’s story wasn’t credible.

Robert W. Copas, 36, of Lawrence, was scheduled to be sentenced Monday in Douglas County District Court for aggravated indecent liberties with an 11-year-old girl. However, Judge James McCabria delayed the sentencing to give prosecutors time to respond to Copas’ new arguments. A new sentencing date has yet to be set.

“There is plenty of evidence in this case to suggest that (the victim) may likely not have been telling the truth when she claimed (Copas) touched her,” appointed attorney Jim Rumsey wrote in a sentencing memorandum filed Thursday.

“…in addition, there is no evidence that Mr. Copas is a pedophile or would ever sexually assault a child from his past.”

After first telling relatives right after the crime happened in July 2017, the victim then told police that Copas had touched her inappropriately outside her clothes for about one minute on one occasion, continuing after she told him to stop, according to a police affidavit and other court filings. She told police that Copas told her, “Please don’t tell, I’m so sorry, I’m so sorry,” but that she did tell because it was “the right thing” to do.

According to the affidavit, Copas confessed to police that he had touched the girl inappropriately and then apologized to her.

Rumsey’s filing included reports by two experts he hired for the case, which did include a preliminary hearing at which the victim testified but never went to trial.

One expert was a psychologist who evaluated Copas and said he was at low-risk for reoffending and that he did not fit the criteria of a pedophile, usually an individual with no conscience who pursues children in lieu of sexual relationships with other adults.

The other expert was a psychologist who reviewed the case, concluding that police inappropriately “shaped and molded” the victim’s account and took advantage of Copas’ gullibility and low education to obtain “a confession of sorts.”

Copas told one of the psychologists that he gave the girl a hug and accidentally briefly touched her over her clothing. He said he had a long history of methamphetamine abuse and was using at the time yet had a clear memory of what happened.

Prosecutor Alice Walker said she would ask for the maximum sentence under state guidelines, 77 months in prison, or just under six-and-a-half years. She objected to Copas’ new arguments being filed at the last minute, accusing his lawyer of “trying to relitigate the case at sentencing.”

In his plea deal, Copas had agreed not to seek a departure from state sentencing guidelines.

Rumsey said his arguments were simply to support his request for Copas to get the minimum prison time within the guidelines, 68 months, or just over five-and-a-half years.

Rumsey noted that Copas pleading no contest meant that while he didn’t contest the evidence the state had against him, he didn’t admit to the crime.

Either way, the conviction requires lifetime post-release supervision and registration as a sex offender.

In March, Copas pleaded no contest to a single count of aggravated indecent liberties with a child, a felony. Prior to the plea deal, Copas had been charged with a more severe level of the same crime.

Copas was arrested and charged after the girl’s report in July 2017.

He was released on a $10,000 bond close to a year ago and remains free on bond pending his sentencing.

The Journal-World confirmed that Copas registered as a sex offender the day after his conviction and that his photo, conviction and home address quickly appeared on the Kansas Bureau of Investigation’s public offender registry website.

While the website does not include offenders’ employment addresses, that information is publicly available upon request to law enforcement.

In the days following his conviction, Copas’ registered employment address was at a local diner, Cosmic Cafe at 1910 Haskell Ave., according to information provided by the Douglas County Sheriff’s Office in response to a request from the newspaper at that time.

After complaints from employees at the restaurant, Copas — a cook — resigned, according to a Facebook post by Cosmic Cafe a few days after his conviction.

As of this week, Copas was not employed anywhere, sheriff’s Sgt. Kristen Channel said, in response to an inquiry from the newspaper about his registered employment address.