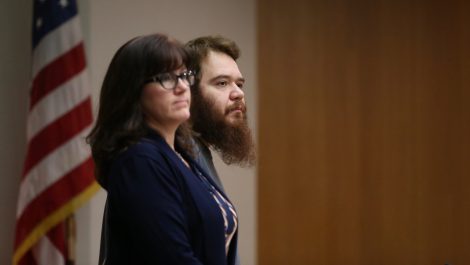 At right, Frank J. Martinez, of Lawrence, listens to the judge during his preliminary hearing on Sept. 4, 2019, in Douglas County District Court. At left is Martinez's defense attorney, Angela Keck.

A Lawrence man has been convicted of repeated sex crimes beginning when a girl was 12 up until the time she was 15.

On Thursday, he pleaded no contest to one count of aggravated indecent liberties, a level-3 felony.

According to an affidavit in the case, the girl told police that Martinez regularly groped her and brushed his hands over her chest while “spooning” and “cuddling” her. She reported that he also kissed her feet and put her toes in his mouth.

“(The victim) stated she was terrified Frank would rape her, so she went along with the touches and his instructions to cuddle,” the police affidavit said.

Douglas County District Court Judge Kay Huff told Martinez his sentence could be anywhere from 55 months to 247 months — close to 20 years and seven months — depending on his criminal history.

Martinez will have to register as a sex offender for 25 years, and he faces lifetime post-release supervision.

Huff ordered an investigation to determine Martinez’s criminal history prior to his sentencing, which is set for Nov. 18.

Martinez was arrested May 8, and he has remained jailed on $150,000 bond, the Journal-World has reported.

• May 9, 2019: Lawrence man charged with sex crimes against teen