Lawrence man said devil told him his date needed to die; then he violently attacked her, affidavit alleges 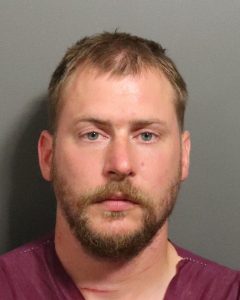 A Lawrence man allegedly told a woman that “the Devil told him she needed to die” before sexually assaulting her and then hitting her twice in the head with a stainless steel skillet as she tried to flee, according to a police affidavit.

Donavan Ryan Hiller, 34, was arrested — after being shocked with a Taser — at his home in the early-morning hours of Friday, Aug. 30. He was charged later that day with three felonies and a misdemeanor: aggravated sexual battery, aggravated battery, criminal threat and criminal restraint.

The Journal-World requested and recently received the affidavit supporting Hiller’s arrest in the case. Allegations in an affidavit have not been proved in court, and defendants in criminal cases should be presumed not guilty unless and until they are convicted.

The alleged victim, a 39-year-old woman, told police she had known Hiller for about a month when he invited her over to his home in the 700 block of Lincoln Street. They had a couple of drinks and kissed, the woman said. She had planned on spending the night and possibly having sex.

As the night progressed, though, Hiller “made comments about the Devil, which made her concerned for his safety,” according to the affidavit. She told police she had picked up a knife and tried to conceal it in the back of her pants, but he had seen her so she put it down.

Hiller then asked her to go to his bedroom so she could see his cats, but when they got inside, she said he told her that the devil told him she needed to die, grabbed her by the neck and threw her on the bed. She said he ripped her pants off, tried kissing her and groped her breasts as she fought back.

The woman told police she had managed to call someone with a speed dial button on her cellphone. Dispatch received a call at 12:50 a.m. from a person whose identity is redacted in the affidavit. The caller said the alleged victim said someone was trying to rape her, and he could hear her screaming and saying “get off me.”

The woman estimated that the struggle lasted about 10 minutes. She said she was able to call 911 on her cellphone, but she dropped the phone and didn’t know if the call had been completed.

The woman reportedly told police that during the struggle Hiller was clothed and had not attempted to rape her. Eventually, she was able to kick him off her.

She said she ran into the kitchen and Hiller hit her in the side of the head with a stainless steel skillet. She tried to find her phone and purse, but she couldn’t. She said Hiller then struck her a second time in the face with the skillet but she was able to get out of the house and out to her car, according to the affidavit.

At 1:13 a.m., Lawrence police officers found the woman in her car, wearing just a T-shirt, near the intersection of Seventh and Lincoln streets. Her face was bloody, and she told police that the man inside had a knife and had told her he was going to kill himself, according to the affidavit.

Hiller reportedly refused to comply with officers’ commands, and they deployed a Taser. He was then taken into custody and to Lawrence Memorial Hospital, according to the affidavit.

At the hospital, Hiller gave police a different version of events. He said he and the woman had gone into his bedroom, taken their clothes off and began a sexual encounter but “it felt weird.” So they stopped and went back to the living room to listen to music, he said, according to the affidavit.

He said the woman brandished a knife and did not threaten him with it, but he knocked it out of her hands. He then went outside for a cigarette, came back in, the two hugged and then “things got weird again.” Hiller told police she started yelling at him, so he told her to leave and locked her out.

Hiller said police then showed up to his house and he held a knife to his own throat because he was scared he had violated his probation and would go to jail, according to the affidavit. He said he didn’t know how the woman got injured.

A scratch is visible on Hiller’s throat in his booking photo from the Douglas County Jail.

As of noon Thursday, Hiller was being held on a $50,000 bond, according to the jail booking log. It also appears from the log that he has a hold from Russell County. Online Kansas Department of Corrections records indicate Hiller had been on probation for a Russell County conviction, a fourth or subsequent DUI from July 14, 2018.