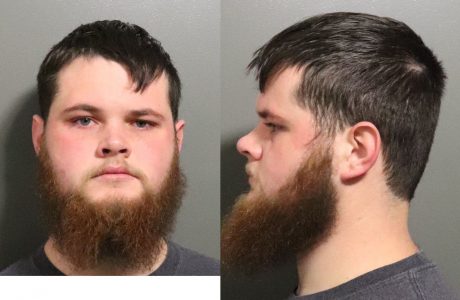 A Lawrence man reportedly exchanged dozens of pornographic images of children and teens, sometimes claiming to be the minor in the images, court documents allege.

The Journal-World requested and recently received the police affidavit supporting Brantley’s arrest and prosecution. Allegations in affidavits have not been proved in court, and defendants in criminal cases should be presumed innocent unless and until they are convicted.

According to the redacted affidavit:

Brantley’s roommate called Lawrence police on Feb. 10, 2018, to report what he said he’d found on a cellphone he’d never seen before.

The roommate reportedly told police that he was trying to diagnose an issue with the WiFi at their residence and he was disabling all devices from the wireless internet a few days prior to his report. In doing so, he found in Brantley’s bedroom what he thought might be a secondary or additional cellphone because he hadn’t seen Brantley using it in the past.

Officers reportedly interviewed Brantley at the Judicial and Law Enforcement Center downtown, though it is unclear from the affidavit when the interview took place. Brantley initially invoked his right not to provide a statement, but later agreed to answer select questions. The affidavit says Brantley admitted it was his phone, but he would not answer questions about its contents.

Looking at the phone, the officer who responded to the initial call reportedly viewed images of young females in various stages of undress; some images and videos also depicted sex acts with adult men.

In a conversation between Brantley and an unknown individual, Brantley reportedly claimed to have taken photos of a young girl he was babysitting “who was ‘comfortable with her body,'” the affidavit says. In another, a sender wrote that he or she was sending images of the sender’s 12-year-old daughter.

The roommate reportedly told police the phone contained images of Brantley, some explicit, some not.

The officer put the phone in airplane mode “to prevent evidentiary loss or tamper” and seized it based on the “apparent criminal nature” of its content.

A Lawrence police detective wrote in the affidavit that he analyzed the information obtained from the phone at the FBI’s Heart of America Regional Computer Forensic Laboratory, HARCFL. The detective alleges that on occasions as early as July 2017 and as recently as days before the roommate’s February 2018 report, Brantley exchanged explicit images of children and teens with several recipients.

Through the descriptions of the content on the phone, the detective lists exchanges that involved more than 100 total images and videos. These interactions allegedly occurred via chat applications, but the specific application is redacted in the affidavit.

Many of the conversations contained sexual images of girls under the age of 10, and others showed senders claiming to be the teens or preteens depicted in images they were sending, according to the affidavit. In several instances listed, Brantley allegedly requested more photos from minor senders after learning of their ages.

A girl depicted in one image was identified by the National Center for Missing and Exploited Children to be 7 years old at the time the image was taken. Another was identified by NCMEC and the Department of Homeland Security, Immigration and Customs Enforcement as being 6 years old when a video was recorded of her engaged in a sex act with an older female, the affidavit says. Others were identified by the Georgia Bureau of Investigation and South Carolina Attorney General’s Office.

Brantley also reportedly described a sexual encounter with children he babysat, but the detective wrote in the affidavit that he was unable to determine whether the stories were fantasy or had actually occurred.

Altogether, the detective wrote that he believed there was probable cause that Brantley had enticed minors to send him explicit images on 10 occasions and that he sent child pornography to others on 15 occasions.

Brantley has been in custody at the Douglas County Jail since his arrest on Oct. 30, jail records indicate. His bond is set at $50,000 cash or surety.

Brantley’s next court date is set for Dec. 26. His appointed defense attorney, Michael Clarke, declined to comment for this article.